Shabbat on Halloween: Horror of horrors or wonder of wonders? 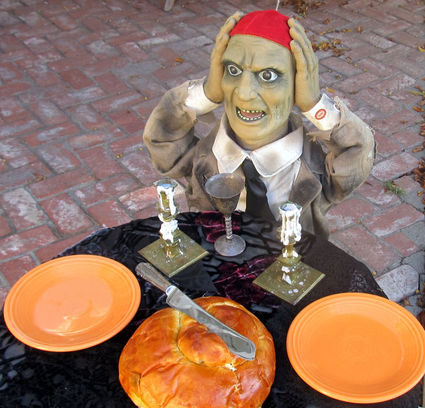 There's no masking it, some Jews are spooked about joining the Halloween celebration on Shabbat.

LOS ANGELES (JTA)-With a borscht-curdling geshrei, Halloween this year falls on Shabbat. On a Friday night, trick-or-treaters, even Jewish ones, will be knocking.

Should we open the door? Or should we be spooked about joining the celebration?

After reading that on Oct. 31, Urban Adama, a Jewish-oriented educational farm and community center in Berkeley, Calif., would be holding a "Challahween Kabbalat Shabbat"-chanting and meditation plus a potluck dinner and Halloween dessert candy bar-I wondered: Should I have a Halloween Shabbat dinner as well?

Yes, I know that when it comes to costumes and treats, Purim is our holiday, and that Halloween has murky pagan and Christian origins. But the multi-billion-dollar Halloween costume, decoration and candy industry has morphed so far beyond that I wondered what I could pull from that bubbling commercial cauldron and adopt to season my Shabbat.

So what I could pull from that bubbling commercial cauldron and adopt to season my Shabbat?

Not that I would want to serve brisket with candy corn, but what about trying pumpkin spice challah? I didn't have to cast a spell to find a recipe online.

But what to wear, especially since I would be greeting the neighborhood children as they came calling. Could I use the opportunity to dress up as someone more shul-ish than ghoulish?

For ideas, I hit a neighborhood costume warehouse, Halloween City, not expecting much in the way of Jewish population. Was I wrong.

Though a Halloween warehouse will never be confused with a Judaica store, I was surprised by the number of items that with a little imagination suggested ways to remember (zachor) Shabbat on Halloween, and even to keep it (shamor).

Searching for something overtly Jewish, I was disappointed at first, only finding costumes more suited to Catholic tastes. One could dress up as a Blessed Mother, priest and friar, but not a rabbi.

On a nearby rack, though, when I found a Doctor Who costume-a red fez and bow tie-I knew I was in the right place to make a fanciful connection to Shabbat. How on earth? Since according to Rabbi Abraham Joshua Heschel "the meaning of the Sabbath is to celebrate time rather than space," who would be better to have at my Halloween Shabbat dinner than a Time Lord?

Searching further in the area with costumes representing ethnic stereotypes, I found that one could dress up as a "Big Shot Scott," a "Mystifying Gypsy" and a "Luscious Leprechaun" complete with a "Want to get lucky?" pot of gold.

The "Tequila Poppin Dude" costume came with two shoulder bandoliers with shot glass holding loops. Improvising, I figured on Shabbat I could put on the bandoliers and a kippah and be a poppin' dude, too, only with Manischewitz.

On an end rack I saw some Shabbat potential, at least thematically in costumes based on the short, yellow, one- and two-eyed characters in the movie "Despicable Me." There in clear packages were a "Minion Dave" costume complete with blue coveralls and goggles, as well as a "Female Minion" costume.

Ahhh, I could have a "minyan" at my Shabbat Halloween dinner-it would even be egalitarian.

Walking past the display of plug-in, animated skeleton fiddlers (from a Sholem Aleichem nightmare?), I found myself in the aisle of ancient get-ups. If I wanted to turn my Shabbat dinner into a toga party or night of Roman-themed excess I was all set. But didn't we fight a few wars to get away from all that?

On the top of the rack, however, I found a blue and gold Egyptian pharaoh's headdress.

"That will work," I thought, trying it on, remembering that in the Shabbat Kiddush are the words "zecher litzeat mitzrayim," "recall the Exodus from Egypt."

Walking by an entire area of black and gray fake headstones (there were no Styrofoam pebbles to leave on them), I came to an area that seemed more heavenly.

In recent years, angel wings have become a Halloween costume staple, and the warehouse had an entire display in every shape and color. To begin every Shabbat, my family always sings "Shalom Aleichem," wishing peace to the "attending angels." Would they be offended, if in their honor, I wore a pair of wings to dinner?

In the next aisle over I found myself amid costumes for girls and women. Was there something here that would invoke the image of Shabbat Hamalka, the Sabbath Queen, who we greet with song on Shabbat evening?

There were costumes for a woodland fairy, a gothic temptress and a "divine goddess" that included a blonde wig and hair jewelry, but nothing close to what I imagined to be the Sabbath Queen.

Then I realized: With a Sabbath Queen, angels who visit on our day of rest and celebrations of time rather than space, we didn't really need any help from Halloween to conceptualize the fantastic.

On Halloween, I could set the table with orange plates on a black tablecloth and wear a pharaoh's headdress. But on that Shabbat evening, as we rise before dinner to face the door and sing the last verse of L'cha Dodi, "Come my beloved," even if the doorbell rings, do we really need all that stuff to imagine who might appear at our threshold?