Silent evidence of the earthquake of 363 CE 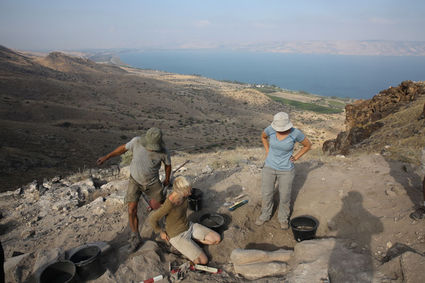 An excellent Roman marble sculpture of a muscular right leg of a man leaning against a tree trunk was found, however, it was too early to determine who the man depicted in the sculpture was.

The skeleton of a woman with a dove-shaped pendant was discovered under the tiles of a collapsed roof by archeologists from the University of Haifa during this excavation season at Hippos-Sussita. They also found a large muscular marble leg and artillery ammunition from some 2,000 years ago. "The data is finally beginning to form a clear historical-archaeological picture," said Dr. Michael Eisenberg, head of the international excavation team.

The past 15 excavation seasons at Hippos-Sussita, run by archeologists from the Zinman Institute of Archaeology at the University of Haifa, have not stopped providing a constant flow of fascinating findings. The team digging at the city site - situated east of the Sea of Galilee in the Sussita National Park, which is under the management of the Israel Nature and Parks Authority - has grown over the years, with more and more teams and excavators from various countries joining them. This time, the security situation in the south of Israel "sent" them a Canadian team, led by Dr. Stephen Chambers, as reinforcement.

The city of Hippos-Sussita, which was founded in the second century BCE, experienced two strong and well-documented earthquakes. The first was in the year 363 CE and it caused heavy damage. The city, did, however, recover. The great earthquake of 749 CE destroyed the city which was subsequently abandoned completely. Evidence of the extensive damage caused by the earthquake of 363 was found in earlier seasons. None, however, was as violent, thrilling and eerie as the evidence discovered this year.

To the north of the basilica, the largest building in town that served as the commercial, economic and judicial center of the city, the dig's senior area supervisor Haim Shkolnik and his team unearthed the remains of several skeletons that had been crushed by the weight of the collapsed roof. Among the bones of one of the women lay a gold dove-shaped pendant.

This year, evidence was found for the first time that the great earthquake of 363 CE had destroyed the Roman bathhouse, which was uncovered by the team run by Arleta Kowalewska from Poland. Like the basilica, it too was not rebuilt. According to Dr. Eisenberg, the evidence found so far shows that the earthquake was so powerful it completely destroyed the city, which took some twenty years to be rebuilt. Among the wreckage from the bathhouse, an excellent Roman marble sculpture of a muscular right leg of a man leaning against a tree trunk was found. "It is too early to determine who the man depicted in the sculpture was. It could be the sculpture of a god or an athlete; it was more than two meters tall. We hope to find more parts of the sculpture in the coming seasons to shed some light on his identity," said Dr. Eisenberg.

Excavations were resumed in the bastion, the main defense post of the Roman period city built on the southern edge of the cliff, where the work focused on the fortified position of a projectile machine that propelled/launched ballista stones. The catapult was some eight meters long according to the size of the chamber. So far the archeologists have found a number of  ballista balls that fit the massive catapult, as well as smaller balls that were used on smaller ballista machines. These machines were positioned above the bastion's vaults and were used to launch basalt ballista balls slightly smaller than soccer balls as far as 350 meters.

A section of the western part of the city's main colonnaded street, which traversed its entire length of 600 meters from east to west (the decumanus maximus) was excavated this year with the help of a Canadian team, after their planned dig in the south was cancelled. The archeologists uncovered another original piece of the wall that supported the street columns, confirming the theory that it had been a magnificent colonnaded street similar to those of the Roman East cities that were built at the peak of the Pax Romana - the Roman era of peace during the first few centuries CE.

While working on the dig the team also invested a lot of work on the site's conservation. "I am extremely proud that we were able to organize a sizable conservation team this year as well, from our own internal budgets and with the help of the Western Galilee College in Acre. Twenty-two students from the college's Department of Conservation together with five experienced conservators under the direction of Julia Burdajewicz from the Academy of Fine Arts in Warsaw conducted the conservation work. This is one of the major tourist destinations in the northern part of the country, and as such I see this as a national mission, even if the budget comes primarily from our own sources, without government support," concluded Dr. Eisenberg.