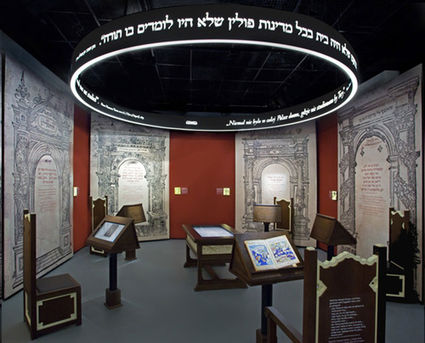 M. STAROWIEYSKA, D.GOLIK/POLIN Museum of the History of Polish Jews

A wooden synagogue that is part of "The Jewish Town" gallery within the core exhibition of the new POLIN Museum of the History of Polish Jews.

Given that half of the 6 million Jews who died in the Holocaust came from Poland, many descendants of Polish Jews may be surprised to learn about the current hospitable environment for the Jewish population of their ancestors' country.

Poland experiences far less anti-Semitism than the typical European country and is home to a burgeoning-albeit relatively small-Jewish community (estimates suggest 10,000-20,000, but no definitive figures are available). At the same time, young non-Jewish Poles are increasingly curious about Jews and the Jewish religion.

Recognizing that this environment was fertile ground for a museum highlighting the history of Polish Jewry, a group of Warsaw-based organizers invited émigré scholars and cultural activists in New York to help promote the museum concept and identify funding sources for what two decades later became the POLIN Museum of the History of Polish Jews, which opened its core exhibition on Oct. 28.

The museum, located on the site of the Warsaw Ghetto uprising directly across from the Monument of the Warsaw Ghetto Heroes, has received more than $60 million from the Municipality of Warsaw and Poland's Ministry of Culture and National Heritage. The rest of the needed funding was raised by the Association of the Jewish Historical Institute of Poland, a non-profit that has served as a caretaker of the country's Jewish heritage for more than six decades.

As a civic initiative and state-funded institution, the museum's target audience "is much broader than the Jewish community in Poland," said Barbara Kirshenblatt-Gimblett, program director of the museum's core exhibition, which traces the 1,000-year history of Jews in Poland.

"It is intended for a much broader public: Poles, including Jews; the world Jewish community; and the European and world public," she said.

From the perspective of Polish-born philanthropist Tad Taube, honorary consul for the Republic of Poland in San Francisco, the significance of the museum's content goes beyond Polish Jewish history. "In portraying 1,000 years of Jewish culture and history in Greater Poland, the museum traces the foundations of Judeo/Christian Western culture," he said, referring to the contribution of Polish Jews to the various spectrums of Jewish and Christian faith in addition to significant Jewish cultural influence in philosophy, literature, theater, music, and the physical sciences. Taube is the chairman of Taube Philanthropies and president of the Koret Foundation, which together provided significant funding for the museum.

Retired Polish diplomat Krzysztof (Kris) W. Kasprzyk, who has been an enthusiastic promoter of the project for more than two decades, sees the museum as particularly important to the Poland of today. "Our national cultural heritage is really impoverished without all that Jewish history in Poland had been bringing for centuries," he told JNS.org. "This museum is like bringing fresh water to the desert-maybe that is an overblown metaphor, but we needed this venue badly."

The museum's goal of reaching out to both the Polish Jewish and broader Polish communities stems from the country's increasingly welcoming environment for Jews. Chief Rabbi of Poland Michael Schudrich suggests two reasons for that trend: first, the papacy of Polish-born John Paul II, who. he noted, was "the first pope to ever say that anti-Semitism is a sin according to the Catholic Church."

The second factor is the fall of communism, which created not only political and economic change, but also a social upheaval. "People are willing to be more open to change than under normal circumstances," Schudrich said, adding that younger Poles are curious about Jews, who had been largely absent or secretive about their identity in the country for 50 years after the Holocaust.

The fall of communism, added Kasprzyk, gave people the gift of free speech, which has allowed them to explore painful events from the past. One of these was the 1941 murder of Jews in Jewabne, a small town in northeast Poland where a Polish mob, encouraged by German Nazis, burned Jews from several surrounding communities in a barn. This incident was revealed to the larger Polish public in the book "Neighbors" by Tomasz Gross (published in 2000) and was widely and openly discussed, a process that Kasprzyk says "heals the wounds."

Although Kasprzyk had strong Jewish connections from an early age and today cooks gefilte fish and Jewish sweets, the definitive moment in his lifetime devotion to Polish-Jewish relations came during his sophomore year at the University of Krakow. That year, during the 1968 Polish political crisis, Kasprzyk recalls that he "witnessed the expelling from Poland of many colleagues from my high school and from the university [because of the anti-Semitic campaign sponsored by the Communist government], and I also witnessed labeling them simply as 'Jews,' as somebody who would be outside of the Polish community."

"Ever since that time, the subject of Polish Jewry was always very dear to my heart," he said.

About two decades after the political crisis, the fall of communism in Rabbi Schudrich's estimation marked "the first time in 50 years people [could] now think about, 'Do I feel safe telling my children and grandchildren that they are really Jewish?"

"Since '89 thousands and thousands, perhaps tens of thousands of Poles, have discovered they have Jewish roots," Schudrich said.

Schudrich, whose job is to create pathways back to Jewish identity for Poles, said the museum can play a role in that process. "For Poles with Jewish roots it can be an entry point into some kind of connection with their Jewish identity; they can learn more about their past and what Judaism is about," he said.

Kirshenblatt-Gimblett said the museum "can support the renewal of Jewish life" by showing to "Jews in Poland, who kept their Jewish roots a secret, that they have nothing to be ashamed of, nothing to be afraid of, and much to be proud of."

But the museum goes beyond a sense of pride, offering a tangible resource for Polish Jews to learn about their history.

"[The museum's creation] says Jewish roots are not enough-you also need to know who you are," said Kirshenblatt-Gimblett. "And who you are is not simply genetic. It is also historical and cultural. While the chain of transmission may have been broken, because of the Holocaust and communism, there is an opportunity to restore that chain of transmission, and the museum can play a very important role."

Kirshenblatt-Gimblett suggested that Jews today are not aware that their coreligionists lived in the Polish territory continually for 1,000 years. "It's quite baffling, because they assume it was one unmitigated story of anti-Semitism that led to the Holocaust," she said, explaining that if this was true, Polish Jewry would never have become a center of the Jewish world and also, for some of its history, the world's largest Jewish community.

The approach of the core exhibit is what Kirshenblatt-Gimblett called a "theater of history" that organizes the story of Polish Jewry "as a continuous visual narrative." The exhibit intends to explore more than instruct, empowering the visitor.

"We are not offering a master narrative, but a rather more open story, asking visitors to engage in that story and engage with primary sources and engage with debates and with conflicting views on particular subjects," said Kirshenblatt-Gimblett.

Regarding how the museum presents Poland and Poles, Kirshenblatt-Gimblett said, "We are a history museum and have to be intellectually responsible, so it is not our intent to improve anyone's image and engage in any kind of polemic. We never start from the misconceptions. We think Jews will be surprised, and Poles will be surprised. Jews expect that the museum will whitewash Polish history, and Poles expect an unmitigated indictment of Polish history. I think the museum will be a revelation for both."

Some highlights of the exhibit are a hand-painted gallery of the medieval period based on Hebrew illuminated manuscripts; a comic-book version of the story of the Ba'al Shem Tov, the founder of Hasidism; a painted animation telling the story of the modern yeshiva via 24 hours in the life of the Volozhin Yeshiva; and an 85-percent scale model of the painted roof and bimah of the 17th-century wooden Gwozdziec Synagogue. The model, built over the course of two years by an international group of volunteers, is based on complete drawings and sketches of both the synagogue and its ceiling.

WARSAW, Poland (JTA) — The POLIN Museum of the History of Polish Jews occupies a shimmering, glass-walled building that faces a dramatic sculptural monument on the site of the Warsaw Ghetto and Warsaw’s main downtown Jewish district.

• The dazzling “Jewish Sistine Chapel,” the reconstructed and elaborately painted ceiling and bimah of the now-destroyed wooden synagogue in Gwozdziec (now in Ukraine), built by hand using traditional tools and techniques by volunteers and students under the leadership of the Massachusetts-based Handshouse Studio.

• A larger-than-life-sized painted animation of 24 hours in the life of the famous yeshiva in Volozhin (now Belarus) founded at the beginning of the 19th century by a disciple of the Gaon of Vilna.

• A cartoon-like animation telling the story of the Baal Shem Tov, the founder of Hasidism.

• “The Jewish Street,” a multimedia mockup of a typical street in pre-World War II Jewish Warsaw with exhibits on Jewish life between the two world wars. Its layout in the museum corresponds to the exact prewar location of Zamenhofa Street, the heart of the prewar Jewish neighborhood of Muranow.

• Hundreds of quotations by and about Jews culled from public documents, official decrees and intimate letters and diaries.

• Interactive installations that allow visitors to “mint” a medieval coin, “print” pages from historic books, and “trace” and translate the epitaphs of century-old Jewish gravestones.

• The Holocaust gallery, which narrates the story of the Shoah in the words of people who experienced it.

• Postwar images of the rebuilding of Poland and Jewish life. 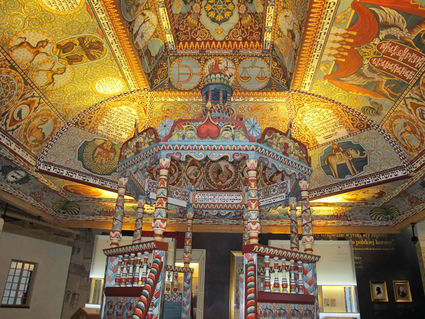 M. STAROWIEYSKA, D.GOLIK/POLIN Museum of the History of Polish Jews

A portion of the "Paradisus Iudaeorum" gallery within the core exhibition of the new POLIN Museum of the History of Polish Jews.