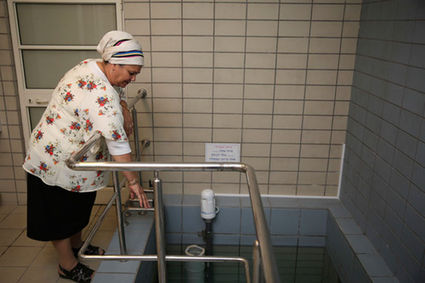 Among the things that Jewish women value most about the mikveh (ritual bath) experience is the feeling of seclusion, sanctity, and safety.

"But the need to feel respected and comfortable is the most important," says Chaya Sett, who since making aliyah from Brooklyn has been a self-described "regular" in the mikvehs of Jerusalem's Old City. "It has to be a very safe place in your life because it's also when you are at your most vulnerable."

Sett speaks for many mikveh-going women in the wake of the Oct. 14 arrest of Rabbi Barry Freundel, a nationally recognized Jewish leader, on charges of voyeurism at his Washington, D.C.-based synagogue's mikveh. Freundel pleaded not guilty to the charges.

It is precisely because of the vulnerability issue that many women are calling for increased security measures and, from some quarters, a major shift in oversight of mikveh practices.

For Rivkah Lambert Adler, who made aliyah from Baltimore in 2010 and lives in Ma'ale Adumim, the Freundel case has beamed a spotlight on gender-related leadership issues.

"There is absolutely no reason why men should hold any power in a women's mikveh," she says. "The leadership of every woman's mikveh should be in the hands of women. If they need to consult with a male professional sometimes, that's fine, as long as women are holding the reins of leadership. In the meantime, I pray that this incident in D.C. will open some eyes to the bigger picture so that we, as a community, can make some mid-course corrections, even before the arrival of Moshiach (the messiah)."

Carrie Bornstein, director of Maayim Haayim, a Boston-area community mikveh and education center, says she has heard reactions from women that are "across the board" since the Freundel story broke.

"Part of what we're hearing is that the privacy, almost the secrecy surrounding mikveh use, combined with the fact that it's men who tend to be in power positions, can be a bad combination, which can make women vulnerable," she says.

When a woman tells her, "I'm not comfortable going [to the mikveh] anymore," Bornstein believes that is "sad because we've made such progress toward opening it up, for the women to own [the ritual] themselves."

"It feels like a big step back," Bornstein says.

Bornstein, who is slated to deliver a workshop on mikveh use at a Jewish Orthodox Feminist Alliance conference in New York on Nov. 23, offers a prescription for change that includes greater female "ownership" of the mikveh process as well as the training of volunteers "to have a heightened awareness and paying attention not just to the stray hair on a woman's back, but to keep their eyes wide open, to be a real support also in difficult times when necessary."

The goal is "to make the mikveh a comfortable, welcoming, and safe place," adds Bornstein.

Rachel Klein of Baltimore, who has studied with Freundel over the years, says, "I do think and have always thought that women should be in charge of everything to do with running the mikveh. Imagine a woman being in charge of a men's mikva."

"As a rabbi [Freundel] did very good work for the community," says Klein. "As a man who did not know how to heal himself, he did terrible damage."

Into this perceived vacuum of leadership steps the "yoetzet halacha." A relatively new profession, a yoetzet is a Torah-knowledgeable woman certified to serve as an advisor for other women regarding family purity and other areas of Jewish law and practice affecting couples, families, sexual relations, and women's medical issues. As director of the Miriam Glaubach Center's U.S. Yoatzot Halacha Fellows Program, Atara Eis manages and trains these women.

"I grieve as a human being, for the rabbinic world in which I live and breathe," Eis writes in a Times of Israel blog. "I grieve as a yoetzet halacha, whose job it is to educate women to love this mitzvah, to love halacha (Jewish law), and to carve out a woman's place in Jewish learning and leadership specifically through the ancient mikveh waters. I grieve for our community, which has taken yet another hit from a leader who has allegedly undermined its most fundamental values."

A yoetzet halacha, Eis adds in an interview with JNS.org, is a woman well-versed in Jewish law who is trained to answer the toughest of questions and keep an eye on mikveh practices-to make sure that an incident similar to the Freundel episode does not resurface for a mikveh-going woman ever again.

"People are taking cheap shots at the whole idea of mikveh but I think we need not throw the baby out with the mikveh bathwater," says Eis. "Instead, we need to re-embrace and restore the trust and confidence women feel in mikveh." Privacy, which Eis defines as wholly different from secrecy, needs to "remain an important part of this intimate experience of immersing in sacred waters," she says.

But at a time when some are calling for increasingly stringent safeguards, from locks and ID requirements to random sweeps by outside agencies on the lookout for embedded spying equipment, there are plenty of observant women who do not see the recent scandal as a trend-or even as a cautionary tale or an indication that the system needs fixing.

"This is an isolated crime," remarks Judy Brodt of Jerusalem, who speaks for many in the observant world. A kallah (bride) teacher who has taught countless women over the years the ancient Jewish laws of family purity and has sent them to the mikveh on the eve of their wedding, she adds, "We can no more blame the mikvehs for his scheming than any other criminal. It says nothing about our mikvehs and everything about him."

Toby Pomerantz, a "balanit" (mikveh dunker) for 21 years in Ma'ale Adumim, says, "We need ways to protect the women and the system." In Pomerantz's mikveh, there is a head balanit who is in charge of the others and another woman in charge of the entire mikveh. "And at no time is a man allowed on the premises after sundown, when the women start to arrive," she explains.

"[The Freundel incident] needs to teach us to be more careful, to be able to use this sad mess to make us even more careful," she says.

Bornstein, the Boston-area mikveh director, warns against demonizing men in positions of authority.

"Yes, having women in leadership positions is necessary, but I don't think that driving a further wedge between men and women is the answer," she says. "[Men and women] need to work together to ensure the safety of the women and the sanctity of the mikveh."