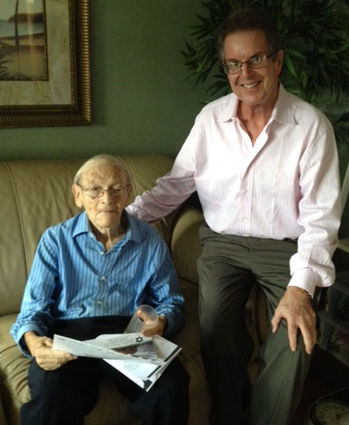 As a volunteer for The Jewish Pavilion, I am familiar with their slogan "Imagine what it would be like to lose your health, your spouse and your home. No one wants to grow old alone!"

Last week, along with Gloria Green, a program director of The Jewish Pavilion, I had the pleasure of meeting 88-year-old, Phillip Schwartz. He is as sharp as a tack and regaled us with vivid recollections of his life. His wife, Adelle, died in 2007 and he still misses her.

Schwartz was born in Montreal, Canada. He is fluent in French, Yiddish and English. He followed in his father's footsteps, becoming a fashion designer/designer pattern maker, specializing in children's clothing. He took a job in Birmingham, Alabama, during the 1960s, working for a children's wear firm. He told me he and Adelle arrived when George Wallace was the famous segregationist governor of the Alabama. Schwartz' senses were shocked at how poorly the African-American people were treated and paid. To be sure, Schwartz explained that one of his and Adelle's happiest moments was when they were able to leave Alabama after having spent 8 to 10 years there during those years of racial turmoil. Schwartz' superior artistry had caught the eye of a clothing manufacturer in New York City. The firm was located in the clothing district, near Macy's and Herald Square. The Schwartzes settled in a home on Long Island. His specialty was, as he put it, "knock offs." In essence he would go to upscale department stores like Saks and Lord and Taylor and ask what dresses were selling the best. Then he would recreate these top-selling fashions to the best of his ability (he is a very modest man). His employer would make and sell those "knock offs" at stores like Macy's at a fraction of the price of the original designer clothing. It's sort of the way Japan and China rose to economic prominence, making "knock-offs" of best-selling American products.

Bored with his retirement in Central Florida, Phillip started "Tops & Tees-"popular-priced, sportswear-related merchandise." He bought merchandise wholesale through his NYC contacts and sold them at a flea market in Daytona Beach. With his fluency in French, he targeted his merchandise toward customers from the large contingent of French Canadian snow-birds arriving every winter. At their peak, he and his wife ended up with seven booths and four employees-Adelle selling sterling and costume jewelry.

Schwartz was very grateful for our visit, as most know growing old can be a lonely existence without family to surround them. He teared up when we presented him with a Jewish calendar, immediately recognizing all the colorful pictures within the calendar (i.e., menorahs, Seder plate, etc). I look forward to getting to know him better and learning a ton from his life experiences.