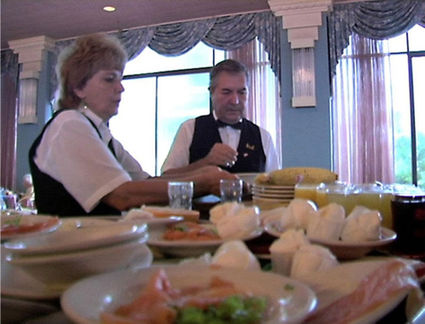 A still shot from the forthcoming film 'Welcome to Kutsher's.'

When young independent music enthusiasts descended on the antiquated Jewish resort of Kutsher's for an international indie rock concert series in 2008, it was "kind of like 'Cocoon' meets 'The Shining,'" Barry Hogan recalls in the forthcoming documentary film "Welcome to Kutsher's: The Last Catskills Resort."

The comment by Hogan, founder of the All Tomorrow's Parties music festival organization, exemplifies the widening generational gap that ultimately forced Kutsher's to close in December 2013. Yet despite the hotel's obvious state of physical decline, Hogan observes, the venue still had the right charm and "intimate" stage for bands and indie "nerd" fans to raise the roof during electric performances.

Similar nostalgia, pride, and humor characterize the other interviews in "Welcome to Kutsher's," which is premiering Dec. 6 in Palm Beach, Fla. Viewers will be treated to a quirky smorgasbord of "Borscht Belt" culture. Directors Ian Rosenberg and Caroline Laskow explore the origins of Jewish American investment in the Catskill Mountains, beginning in the late 19th century. Next, the filmmaking pair visits Kutsher's Country Club. This prominent hotel was a magnet for vacationing Jewish families, as well as a springboard to success for prominent entertainers and gifted athletes, throughout the latter half of the 20th century.

Now that the Catskills region is in decline, the film honors the legacy of those who made summer memories so colorful for so many generations, and sheds new light on a vibrant chapter of the American Jewish experience.

Mark Kutsher, then the hotel's owner, was proud to host the indie rock concert series in 2008. Staying true to his family's inviting and experimenting business style, he admires the youthful spirit and dedication of the festival participants, even though he finds their loud music "physically damaging."

Indeed, the famous concert hall at Kutsher's is a cherished relic of an illustrious past. Ray Charles performed there. Jay Leno, Jerry Seinfeld, the late Joan Rivers, and many other stars made regular appearances at the hotel at some point in their careers. Assembling this cast of characters epitomized the inclusive spirit that was at the heart of the Borscht Belt experience.

We shouldn't forget that the Jewish resorts in the Catskills "were created in large part because other hotels in the region refused to admit Jews around the turn of the century through the 1930s," Rosenberg reminds audiences.

"The phrase, 'No Hebrews or Consumptives' were included in advertisements for these restricted hotels," he says.

The culture of Kutsher's and other Jewish hotels in the Catskills evolved to accommodate religiously observant patrons, providing Friday night and holiday services as well as kosher cooking. For the first time in history, it was possible for strictly religious Jewish families to go on holiday.

The story of Kutsher's is also a tale of assimilation. Ironically, the oppressed population that initially sought refuge and release in the form of an affordable and accessible family vacation ultimately outgrew the resorts that had nurtured their prospering culture. The Catskills no longer appealed to newly affluent Jews.

One poignant moment in the film recounts the effect the advent of jet travel had on the hotel. "As things went on, people were asking for all the amenities with the hotel," family matriarch Helen Kutsher, regarded the "First Lady of the Catskills," says.

"Do you have an indoor pool? Do you have a golf course?" callers would often ask before making a reservation, according to Helen. "They wanted everything. ... I asked many people, 'Do you play golf? Do you like swimming?' 'No,' they'd answer, 'but I like to know that you have it.'"

Competition for Kutsher's was intense, as luxury hotels proliferated around the country, offering deluxe packages with no discriminatory barriers to entry. Likewise, Caribbean cruises came into vogue. Even more alluring, the prospect of buying property in Florida, where aging patrons could live on what became known as "permanent vacation," defined decades of exodus from the Catskills tradition.

Perhaps the most nostalgic description of a vacation culture in decline can be found in the popular film "Dirty Dancing," which depicts a Jewish resort "largely believed to be based on Kutsher's," says Laskow. Towards the end of the film, Max Kellerman (Jake Weston), a fictional hotel owner, watches the season-ending pageant and remarks, "It all seems to be ending. You think kids want to come with their parents to take foxtrot lessons? Trips to Europe, that's what the kids want. Twenty-two countries in three days."

From the 1970s through the 1990s, diverging interests and a widening generation gap unraveled the close-knit traditions that Jewish families had established at their favorite Catskills resort. What exactly are these traditions? "Welcome to Kutsher's" won't leave you "hungry" for details. The documentary focuses on the Jewish home cooking that earned the region its "Borscht Belt" nickname. Viewers will enjoy learning about the unique personalities in the Kutsher family that contributed to the hotel's family-oriented atmosphere. Dedicated employees recount the warm feelings they harbor for the owners, and guests share fond memories of their family vacations. 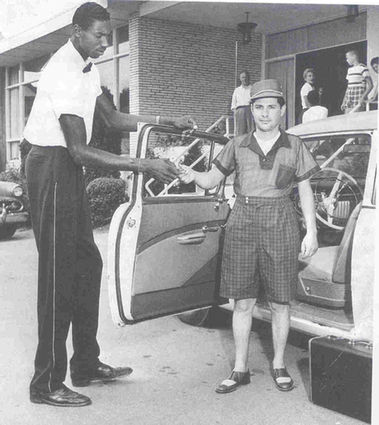 Rosenberg and Laskow admit that they arrived late to the Kutsher's scene, making their first trip to the hotel in 2002. But thinning crowds and unrented rooms aside, there was still plenty of magic and the experience inspired them.

"Ian learned to ice skate after an impromptu lesson with Celia Duffy, whom we would later feature in our documentary," Laskow recounts. "We took the Seabreeze special cocktails out to the pool, attended a still-life art class, and enormously enjoyed our many meals."

Perhaps time was running out for this form of entertainment and the Catskills resort atmosphere, but it's clear that this filmmaking duo taps into an essential aspect of Jewish American culture. "Welcome to Kutsher's" offers a heartfelt view of an iconic Jewish establishment, chronicling memories to be cherished.