Local women immerse themselves in mikveh education through Chabad 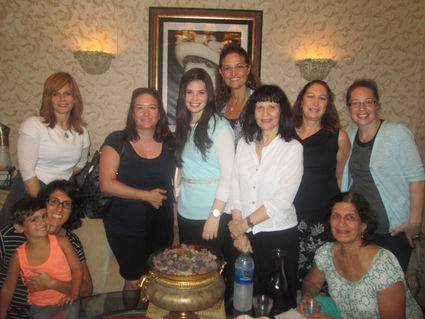 Chanshy Majesky was overcome with great sadness following the Hebrew month of Adar (March) that even the joyous effects of Purim could not lift. Two of her colleagues from the Chabad community, Rashi Minkowitz of Fulton County, Georgia, and Rivky Barber of Melbourne, Australia, passed unexpectedly, leaving behind motherless children and grieving communities.

Majesky and her fellow schluchot (emissaries of the late Lubavitcher Rebbe who are sent out to spread Judaism to Jews around the globe) have joined together to honor these two young women, by launching the Mikvah1Campaign. This campaign invites Jewish women who don't typically use or who have never experienced the mikveh, or ritual bath, to partake in this mitzvah for the first time. She stated in an opinion piece in the Heritage Jewish News April 11 issue, "I ask you please in honor of Rashi and Rivky to open your heart and mind and give yourself, your family and your spouse the gift and chance to visit the mikveh at least once... Rashi just finished building a beautiful mikveh in her community for the women to use. She was so proud of the new beautiful looking spa and has had so many women from her community use it in the short time that it was opened."

Majesky was heartened by the overwhelming response to her letter. She had expected to counsel and guide congregants individually, but put together a three-day mikveh readiness course to create a community of learners invested in mikveh education.

On Tuesday, July 8, 10 women from a wide range of Jewish backgrounds joined Majesky in her Lake Mary home for a class appropriately titled "Mikveh Madness."

During the first session, Majesky aimed to remove the mystery behind the mikveh. She noted," For many, mikveh is a taboo topic that they are not so familiar with. " Chanshy recounted that the word mikveh was rarely spoken in her own home, even though her mother was the "mikveh lady" or attendant at the Maitland area mikveh at the Maitland Chabad Center. Majesky hoped to create a dialogue that women in class could continue at home with their own daughters.

Majesky explained that a mikveh was much more than a ritual bath performed by married, observant women. She added that many Jewish women observe the practice of the mikveh, and not just from the Orthodox community. She considered the mikveh to be a mitzvah of the highest order, explaining, "This is such a powerful mitzvah that Torah says brings blessings for the children, the home and marriage. It is even more important than having a shul or a Torah! Mikveh enhances a marriage, creates peace in our relationships with our spouse and has a lot of physical and spiritual benefits from attending."

The class learned that the ritual immersion of the mikveh is used for three purposes: married women (family purity), conversions, and the koshering of utensils.

The "Mikveh Madness" course focused on the family purity aspect, which Majesky shared is often misunderstood. The four-stage process in the observation of the mikveh involve family purity and include: separation, preparation, sanctification, and connection. These steps are synchronized with a woman's menstrual cycle. When a woman has gone seven days without bleeding, she will go to the mikveh for a ritual immersion bath. The mikveh is not taken because a woman is considered unclean during the time of her period. Rather, it is a spiritual renewal.

"There is a fringe benefit to the time of separation between her and her husband." Majesky recounted. The "Mikveh Madness" handbook says "Now that she has taken the time and made the space for herself, she is able to be with her husband in the ultimate way. She is refreshed after the mikveh, and is able to be intimate with her natural feelings."

Majesky revealed that although women use the mikveh "just because G-d asks us to" and there are no reasons for it in the Torah, there are many additional benefits in a marriage resulting from the mikveh. The Talmud reasoned that a "mikveh helps keep romance aflame so that she will be as beloved as on the day of her wedding." Majesky stated, "Absence makes the heart grow fonder in marriages that use the mikveh. A Kinsey Institute study showed that the highest frequency for relations in people over 35 is by observant Jews. A 1998 Brandeis study showed that only 1.2 percent of marriages fail by observant Jews who keep the mikveh (versus 52 percent in the general population). She continued, "The Torah knew it before the therapists did. The laws of separation make a couple appreciate all five senses in each other. Every touch is precious, every kiss is sensual, and every hug is intimate. Nothing is taken for granted."

As of the New Year, more than 3,000 women have been touched by Mikvah1Campaign, and have partaken in mikveh education. Majesky concluded,

"I am utterly inspired by the commitment of Jewish women to visit the mikveh and I am honored to be able to guide them through the process."