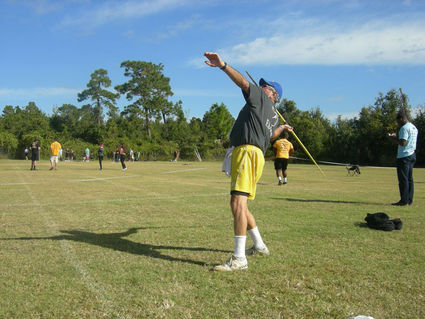 Laurence Morrell warming up for a javelin toss.

Laurence Morrell wasn't looking for fame or shiny trophies. He signed up for the Golden Age Games in Sanford for "one last hurrah," as he put it, after a 12-year hiatus, and he got more than he bargained for. Not only was he pleased with how he did in the 500 gm javelin throw, 1K discus and 4K shot put throws, but he also won three medals-two bronze for javelin and discus, and a silver for his shot put throw.

The Golden Games, held in Sanford, provide anyone 50 years of age or older who wants to stay active and competitive the opportunity to show themselves what they can still do when athletic competition gets the juices flowing. According to Morrell though, "the goal is to outlive your competition."

Morrell went to the Games on Nov. 8 (they ran through Nov. 15) and stayed only long enough to compete in his divisions, then left to attend his grandson, Nathan's, baseball game. He really just wanted to see if he could still do these throwing events. After all, he is 72 and has had a couple of heart caths, which resulted in a total of six stents, and a couple back surgeries.

Describing himself as "not a typical Jewish male living in Central Florida," he has always been involved in sports since high school. After college he participated in recreational soccer with the Orlando Soccer Club-the only American on the team, too, he added.

"I was royally pissed," he said. However, he did participate in Master's throwing events throughout Florida; Atlanta, Ga.; Raleigh, N.C.; and in San Juan, Puerto Rico.

Then in 2002, he had the heart caths and the stents put in. He also was diagnosed with type 2 diabetes at that time. Morrell is happy to say that he is no longer diabetic. He dropped 50 lbs. through diet and exercise.

"Don't give in to aches and pains," he said. "Don't let them rule your life. Ignore them and keep going. Oh yes, always solve the problem-surgery if all else fails."

He does take his own advice. Back in 2009, Morrell started training in the JCC pool for the swimming events in the 2013 Maccabiah Games. While swimming he experienced chest pains. "This isn't normal," he said and went to his cardiologist immediately. The diagnosis: a 98 percent blockage and another stent. 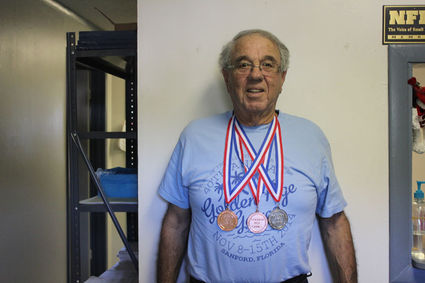 "Growing old gracefully is nice, but growing older with pizzaz is even better," wrote local author Lois Silverman in her book, "Some of the Best Destinations in Life Begin with a Detour." This fits Morrell to a tee as he continues to be physically active and involved in community.

"My new schtick is splitting wood with an ax, sledge hammer and a wedge," he said. But he does more than split wood. When he isn't working out at RDV Sportsplex three times a week doing deep-water fitness aerobics, he is volunteering his horticulture expertise all around the Jewish community. He landscaped the grounds around Temple Israel and its cemetery. Morrell also does lunch room duty at the Jewish Academy of Orlando, as well as teaches gardening to the middle schoolers in the spring and even started a garden club with the students.

Now Morrell will add these last three medals to his vast collection of medals and trophies he has on display in his home-medals that prove to him that he still has it.