A different kind of refugee-Jews from Arab countries 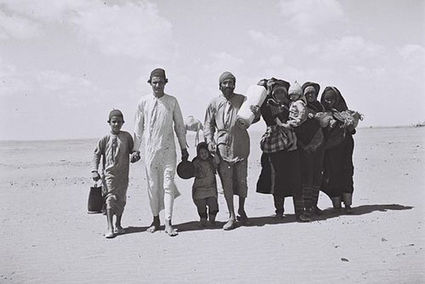 In 1949, a Yemenite Jewish family walks through the desert to a refugee camp set up by the American Jewish Joint Distribution Committee in the city of Aden.

It may have been 47 years ago but Yossef Carasso remembers every detail of the night that he was taken to an Egyptian police station from his home in the city of Tanta, near Cairo. It was the first night of the 1967 war.

"We were the only Jewish family still left in Tanta and at 10 p.m. there was a knock on the door," Carasso told The Media Line. "The policeman told my father, 'We're looking for your son and son-in-law. They took us to a police station and left us there all night.'"

Carasso, who was not accused of any crime, was among 400 Jews who were imprisoned in Egypt at the start of the war when Egypt, along with Syria and Jordan attacked Israel. For six months, he says, his parents didn't know if he was still alive. Finally he was allowed to write to them.

Two years later he was released, and the next day he and his family left Egypt, originally for France and then for Israel. According to Justice for Jews from Arab Countries (JJAC), almost 120,000 Jews left Egypt in the 1950s and 60s. There are only a few dozen Jews left in Egypt today.

Last week, he attended a ceremony at Israeli President Reuven Rivlin's residence, designating Nov. 30 as the national day of commemoration of the plight of Jewish refugees from Arab lands and Iran. According to the United Nations, about 850,000 Jews left their homes in Arab countries, more than the 750,000 Palestinians who became refugees with the creation of the state of Israel in 1948. The largest number of Arab Jews came from Morocco, Algeria and Iraq. Today half of all Israelis have roots in Arab countries, and are known as Mizrahi (Eastern) Jews as opposed to Ashkenazi Jews from Eastern Europe.

The national day was established to raise awareness in both Israel and abroad about the culture of the Jews from Arab countries, as well as to begin a discussion of the issue of compensation for all of the property the Jews left behind.

"We have a whole history that even my children don't know," Sylvain Abitboul, the co-president of JJAC told The Media Line. "Everybody is always talking about the Palestinian refugees, but we want the world to know there is another set of refugees."

Abitboul, who was born in Morocco, immigrated to Canada at age 18, and became an active member of the Jewish community in Montreal, including a stint as the past president of the Montreal Jewish Federation.

Many of the Jews from Arab countries left extensive property in their home countries before they emigrated. Abitboul says the estimate is that the total is $300 billion in today's dollars. In 2000, then President Clinton suggested establishing a fund that would compensate both Palestinian and Jewish refugees.

At the ceremony, President Rivlin, whose own roots in Israel date back to the early 1800s and who is an Ashkenazi Jew, said Israel needed to do more to integrate Mizrahi history and culture. For many years, the Ashkenazim were seen as the elite, and dominated educational and cultural institutions.

"We have come together today to make amends for a historical injustice, against a million Jews, immigrants from Arab countries and Iran, who stories were pushed to the margins of the Zionist narrative," Rivlin told the crowd at his residence. "Indeed this comes too late, on too small a scale and no longer has an impact on public consciousness. Yet, still it is important to seek the correction, which should not be underestimated."

Many of the attendees said that when they first came to Israel, they were embarrassed by their Arabic accents. Their parents were shunted off to peripheral areas in the country and low-paying jobs.

But recently there has been a renewed interest in Mizrachi culture, including music and food.

"It's quite astonishing to see the revival of the culture in Israel," Lyn Julius, the founder of Harif, the UK-based Association of Jews from the Middle East and North Africa told The Media Line. "The grandchildren of Jews from Arab and Muslim countries are becoming interested in their roots. It's now harder to find a bagel than it is to find kubbeh (a Moroccan dish of fried dough stuffed with meat) in Israel."