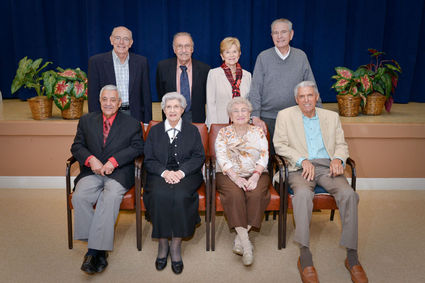 Plans are well underway for The Kinneret Council on Aging's (KCOA) fourth annual 8 over 80 Honorary Dinner that will be held on Sunday, March 1, 2015. The 8 over 80 event recognizes individuals over the age of 80 who continue to contribute to our community through their volunteer and philanthropy efforts.

Avie Abramowitz, 81, moved here from Baltimore, Maryland, in 1951 with his family. His father bought orange groves. After a year at Rollins College, Abramowitz returned to Maryland to get a degree in agriculture. He returned to Florida in 1957. After the groves froze that same year, he decided to get into the life insurance business. He became very successful and consistently won awards for his sales efforts. Abramowitz became very involved with the Central Florida community. He served on the Valencia Community College board; was appointed to the Orlando Housing Authority by Mayor Carl Langford where he was the only Jew; and was one of the first members of the Citrus Club. He spent many years raising money for Jewish and cultural charities and hosted large events at his home, where he brought in celebrities, including Bob Hope and Zsa Zsa Gabor, to support these efforts. He is most proud of his efforts to bring the premier of "Schindler's List" to Orlando in 1994. Abramowitz spends his time with his wife, Jeanne, between Orlando and his home in Switzerland. He bike rides over 125 miles a week, plays tennis and travels. Abramowitz was nominated by Phyllis Kamenoff, one of Kinneret's first '8 over 80' honorees.

Helen Hosid, 95, was born in New York City at Lenox Hill Hospital in 1919. She just celebrated her 95th birthday on Dec. 21. After high school, Hosid attended Long Island University. In her biology class, she was seated alphabetically-right behind Jack Hosid. They were married on March 22, 1942 and had three daughters. When Jack was in the Army, he was stationed mostly in the southern United States. It was here that Hosid met many people who had never met a Jewish person and she found herself being asked questions about her faith. This started Hosid on a learning journey about Judaism that continues to this day. She was extremely involved in both B'nai B'rith and Hadassah, receiving numerous local and national awards for her efforts. She was a leader in educating the public school system in Florida to recognize Jewish holidays and not have tests given on those days. Since 1956 Hosid has been an active member of Temple Israel, serving on numerous Temple and Sisterhood committees. She was present at the ground breaking ceremonies of Kinneret Apartments and spent many years visiting her mother, Mary Jabitsky, who lived here. Hosid was nominated by Lori Pearson-Wise.

Morris Rashy, 80, has been an active volunteer for the Kinneret Council on Aging for many years. He regularly conducts the residents' Friday Night Shabbat services and leads the annual Passover Seder. A few years ago, Rashy tutored four Kinneret residents who were called to the Torah as b'not mitzvah. Rashy also volunteers his time at area nursing homes and has previously served on the board of RSVP. Rashy lives in Altamonte Springs with his wife, Sheila, who often accompanies him to volunteer. He and Sheila will celebrate 58 years of marriage on Jan. 17. They have two children and numerous grandchildren. Rashy was a long-distance runner for many years, including running a 24-hour marathon at the age of 60. Rashy was nominated by Kinneret residents Joan Rosenman and Jean Dolen.

Ron Shader, 82, was born in Orlando and raised by his parents, Ben and Bessie, on the Shader Dairy and Citrus Grove, an 80-acre cattle farm located in what is currently the John Young Parkway area. Shader became a bar mitzvah at Congregation Ohev Shalom in 1945, where his family was one of the original founding members. Shader attended the University of Florida for two years before begin drafted into the Army. He was assigned to the Supply Depot in Munich, Germany, issuing fatigues to the mechanics and traveling to Auschwitz Concentration Camp to deliver supplies. He returned to Orlando and met his future wife, Mardi, on a blind date. Mardi was his best friend's date. They will celebrate their 50th wedding anniversary on Feb. 14th, 2015. In 1982 Shader and his brother, Stanley, started Personal Mini Storage on some property they owned after a chance meeting with a friend. The business still operates today and includes over 27 projects. Shader still goes to the office four days a week. He has been involved in Congregation Ohev Shalom, serving on many committees and the board of directors. Shader was nominated by Dick Appelbaum.

Sandy Silbert, 82, was nominated by Elise Schilowitz, who described Silbert as a wonderful example of growing old gracefully with a zest for life. Silbert was educated at the Curtis School of Music and was an accomplished violinist. Several years ago she developed arthritis and was no longer able to play. She channeled her artistic expression into a new passion-creating beautiful watercolor paintings. Her artwork has been used by the Jewish Pavilion, an organization where she sits on the Friends Board and is active in their gala and walk. She is a 30-year member of Temple Israel and has served on their sisterhood and chaired their program committee. She celebrated her 80th birthday by becoming a bat mitzvah. She and her husband, Leonard, live in Longwood.

Mark Silverberg, 80, was born in 1934 in Cleveland, Ohio. He attended the University of Pennsylvania and graduated from the Wharton School with a BS in economics. After a stint in the U.S. Army, Silverberg pursued his interest in drama by performing in community theater, summer stock and produced and hosted his own show, "Mark's Playhouse" while living in San Juan, Puerto Rico. In 1962, he began to re-focus on his career and began a successful career with Jeannette Corporation. He became re-acquainted with Lois Feldman, a friend from high school, during a visit home to Cleveland. Two dates later they were engaged and just recently celebrated 52 years of marriage. Silverberg has been involved in community organizations throughout his lifetime, including both in Pittsburgh and Central Florida. He has served continuously on the Kinneret Council on Aging Board since 1986, including two terms as president. He was instrumental in the creation of the Jewish Pavilion, and is credited with the creation of their name. In 2002, he was encouraged to audition for a short sales film. That audition has led to his latest theatrical career that includes a large portfolio of national and regional TV commercials, print jobs, and roles in independent films and convention performances. Silverberg was nominated by Judy Kahan.

Betty Stein, 89, was born in Boston, Massachusetts, to a family of creative musicians and artists. She studied trumpet at the New England Conservatory of Music in Boston. She was also a talented artist who could draw, paint, sew and sculpt and often filled her home with the beautiful art she created. Stein's love of art and music influenced all aspects of her life and she brought this passion to her efforts in the classroom as an educator, as well as to the community where she was an avid fundraiser for many organizations. She was the fund-raising chairwoman for Chaverot Hadassah for over 27 years and active in Temple Israel Sisterhood activities since 1969. Stein also supported The Head Start Program, Give Kids the World and Jewish Family Services. She was nominated by her daughter Carol, who credits her mother for instilling in her not only a passion for music but also a desire to make the world a better place.

Harvey Titen, 92, was nominated by Bill Kahn, one of the 2014 '8 over 80' honorees. Titen was born in Brooklyn, New York, in 1922. He graduated Thomas Jefferson High School in 1939. Titen started working in the engineering field, gaining hands-on experience and training and working on government contracts. At night, he would attend college, working toward his civil engineering degree. When the Martin Company was offered a government contract that Titen had been working on, the government purchasing agent insisted that Martin hire him to oversee the project. Titen and his family moved to Baltimore, and he begin his career with what was to become Martin Marietta and he finally got his civil engineering degree-20 years later! Titen worked for Martin Marietta for 34 years, overseeing many programs including the Pershing Missile Program. He and his wife, Gloria, were married for 66 years. Gloria was the sister of Titen's childhood friend and first met when she was 10 years old. They raised three children and made their home in Dommerich Hills. Titen served on the Dommerich Homeowners Association board for over 25 years. He also is an active member of Temple Israel and still serves on several committees. He operates HT Consultants and is currently working on a portable French-fry dispensing machine.

The '8 over 80' event will start at 5 p.m. in the Jessie Render Social Hall where hors d'oeuvres and cocktails will be served. At 5:45 p.m., guests will move into the Delaney Dining Room where a traditional kosher meal will be served at an elegant sit-down dinner. The highlight of the evening will be the introduction of the honorees and a viewing of a specially produced video.

There are several ways for the community to support KCOA and celebrate this year's '8 over 80' honorees. For information on tickets, please contact Leslie Collin at 407-425-4537 or by email at lcollin@bellsouth.net. Seating will be limited. In addition, congratulatory ads and messages can be placed in the '8 over 80 Tribute Ad' book. Ads must be received by Feb. 16, 2015. Contact Leslie for information on the Tribute book or check the website at http://www.kinneretapartments.com.