By Israel Hayom
Exclusive to JNS.org 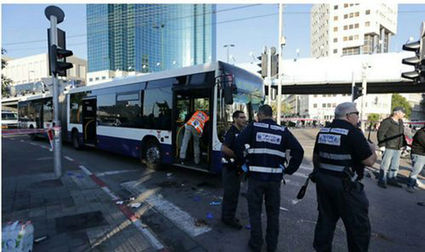 The scene of Wednesday's Palestinian terrorist stabbing attack on a bus in Tel Aviv.

Thanks to the efforts of a bus driver who fought off a Palestinian terrorist, the stabbing attack that injured 12 people aboard Dan Bus No. 40 in Tel Aviv last week did not end in a single death.

Israeli police officials praised the actions of Herzl Biton, the 55-year-old bus driver who was the first person to get stabbed by terrorist Hamza Muhammed Hassan Matrouk. Despite being seriously wounded, Biton managed to use pepper spray on the assailant and fight him off while simultaneously opening the bus doors to allow passengers to flee.

Biton, who slipped into a coma as a result of his injuries, regained consciousness the next day and his condition dramatically improved. His family urged the people of Israel to pray for his health, while many of his relatives spent the night at the hospital around his bed.

"He motions to us with his fingers," said Eli Biton, the driver's brother. "It is obvious that he is in pain. But he was God's messenger, in the right place at the right time. Several days before the attack, he told his son that he was worried about possible attacks. He had a feeling that he would be next."

Immediately after he was stabbed, Biton managed to call his supervisor, Kazis Matzliach, and said, "A terrorist has gotten on my bus. Save me. ... He hurt me bad all over my body. He stabbed my passengers. I am next to Beit Maariv. ... I am dripping blood. ... I am going to die. If anything happens to me, watch over my children."

"He started yelling, and I was in pain because I didn't know how to help him," said Matzliach. "I told him to save himself and not to worry, that I would get help. At the same time I tried to keep him on the line to make sure he was okay, but the call was disconnected and I rushed to the scene."

"He behaved the way you would expect. He fought off the terrorist to protect his passengers," Matzliach added.

The terrorist attack ended relatively quickly, mainly due to the response of the members of the Nachshon Unit (the security branch of the Israel Prison Service), who happened to be in a vehicle behind the bus. Benny Boterashvili, the commander of the unit, said Wednesday, "We were on a routine mission, transporting suspects to the courthouse. Under the Maariv bridge I saw a bus shaking from side to side. Within half a minute, I saw the bus stop at a green light and immediately knew that something was wrong. Seconds later I saw people rushing out so I understood that it was a terrorist attack. I told my team to grab their weapons, get out of the car and pursue the terrorist."

Boterashvili and three other security officers pursued the terrorist while two other remained behind to look after the victims. "We flanked the terrorist from the right and the left," he said. "The fighters fired in the air to warn him and when he didn't stop they shot him in the legs. We subdued him and bound him and then the police came."

The Israel Police raised its alert level in the wake of the Tel Aviv attack. Police Commissioner Insp. Gen. Yohanan Danino emphasized that the police would continue to operate on high alert in order to ensure the safety of the citizens of Israel.

Danino and Sau both visited the scene of the attack to assess the situation. Following the visit, Danino raised the alert level and instructed officers to maintain operational preparedness in all Israeli districts. He also praised the heroism of the officers involved in neutralizing the attack.

The terrorist, Matrouk, admitted to the Shin Bet security agency that his motivation for the attack was revenge for Israel's Operation Protective Edge in Gaza last summer as well as the recent tension over the Temple Mount. Matrouk, a 23-year-old resident of the Palestinian city of Tulkarem, also attributed his attack to Islamic programming that taught him about the "path to heaven" through "martyrdom."

Matrouk entered Israel illegally on the morning of the attack.