Already 2 million strong, CUFI seeks to double down on Christian support for Israel 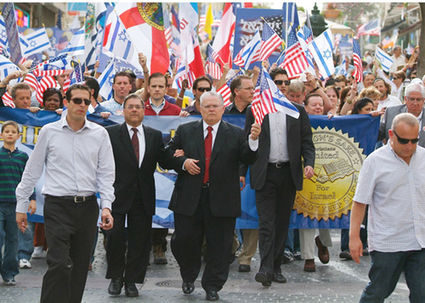 A Christians United for Israel (CUFI) solidarity march in Jerusalem in 2010. In center in front the banner, holding American and Israeli flags, is CUFI founder Pastor John Hagee.

"Usually after the first event, it's like a firestorm," said Pastor Scott Thomas, the Florida state director for Christians United for Israel (CUFI). "The excitement hits, the understanding settles in."

That, in short, illustrates the process through which CUFI has become America's largest pro-Israel organization in less than a decade of existence. In January, CUFI announced that its membership surpassed the 2-million mark. (The organization defines members as email-list subscribers whose addresses do not produce bounce-backs when messaged.)

Since its founding in 2006, CUFI has held more than 2,100 pro-Israel events, sent hundreds of thousands of advocacy emails to government officials, and trained thousands of college students to make the case for Israel across the U.S.

Pastor John Hagee, CUFI's founder and national chairman, said that when he called 400 Evangelical Christian leaders to San Antonio in 2006 to pitch them on the idea of CUFI, he thought his concept of pro-Israel programming that would "not be conversionary in any sense of the word" might deter the leaders. Instead, when he asked them to raise their hands if they accepted his proposal, "400 men raised their hands with an absolute unity that was breathtaking."

"It was one of those surreal moments that was difficult to believe had happened so effortlessly, and Christians United for Israel took off," Hagee told JNS.org at the 10th annual CUFI Leadership Summit in San Antonio on Jan. 27.

While Hagee planned for the initial group of 400 leaders to advocate for Israel on Capitol Hill that summer as a "test group," the leaders spread the word among their own churches, and CUFI ended up bringing 3,500 people on the mission to Washington, DC.

CUFI continues to grow exponentially, but Hagee isn't satisfied. He said the organization hopes to double its membership to 4 million over the next two to three years.

"We are very delighted with our 2 million-plus membership base, but we want it to be many multiples of that," said Hagee. "We feel that it's imperative [to understand] that our ability to go to Washington representing 8-10 million people would be considerably greater than just 2 million."

What's the secret behind CUFI's growth?

"It kind of happens organically," Thomas, the Florida state director, told JNS.org. "It happens from all different angles. We'll get a phone call from somebody who attends a congregation and says, 'Hey, I would like for my pastor to receive information about CUFI.' And so we'll send out information packets to those pastors to start the conversation. We'll introduce them to CUFI, tell them what the events are like and what CUFI stands for. And then hopefully beyond that, we'll be able to generate a follow-up phone call, introduce CUFI [to the pastor] verbally, answer any questions he might have, and find out what his perspective and stance and theology are on Israel."

From there, CUFI offers to host a "Standing with Israel" event at that pastor's church, an approximately hour-long educational and informational session on the biblical roots of Christian support for Israel as well as current events in the Middle East. Eventually, the goal is to facilitate a larger program called "A Night to Honor Israel"-CUFI's signature event, which the organization aims to host in every major U.S. city each year.

"A Night to Honor Israel," however, significantly predates CUFI. Hagee said that in 1981, he sought to organize the event as a one-time gesture to thank Israel for bombing Iraq's Osirak nuclear reactor. But then Hagee received death threats, as well as a bomb threat to the venue on the night of the event. His response? More than three decades of Nights to Honor Israel.

"I told my wife, we're going to do a Night to Honor Israel until these anti-Semitic rednecks get used to it," Hagee said. "And 34 years later, it has grown all over the nation."

"I identified leaders in cities that very much had a passion for the support of Israel, and I began to meet with those leaders, raising up city leaders [for CUFI] throughout Minnesota... and [discussing] how they could have an impact within their city and spheres of influence," Burt told JNS.org.

CUFI has now three-dozen city leaders in Minnesota. After CUFI took 16 pastors of African-rooted Minnesota churches on a trip to Israel last year, one of the pastors on that trip organized a trip of his own for 16 more pastors.

"It's starting to snowball in that respect," Burt said.

Before CUFI, despite the presence of a "reservoir of instinctive support for Israel" in America, that base of support "had a hard time finding a way to express itself," said CUFI board member Gary Bauer, the U.S. Under Secretary of Education under President Ronald Reagan.

"As CUFI was set up, and Pastor Hagee and [his wife] Diana had this vision, and others joined with them, and then as time passed and people saw us speaking up, whether the president was a Republican or a Democrat, or whether there was Republican Congress or a Democratic Congress, I think the word spread," Bauer told JNS.org. "If you were pro-Israel, if you care about the alliance between these two great nations, and you want to do something, but you live in Toledo or Knoxville or Birmingham or Sacramento... this is the organization you can invest in and feel confident that you're not going to wake up one morning and see an embarrassing story."

"We'd bring Jews and Christians together [before CUFI existed]," Styrsky told JNS.org. "We didn't call them Nights to Honor Israel, but we were doing those, and rallies, and we were emptying savings accounts, running full-page ads, and we had no CUFI to keep it going, so we would literally disappear for years."

Styrsky said that now, when he speaks to pastors on behalf of CUFI, "Almost always at the end of 45 minutes to an hour, we see the light bulbs go off, and a new journey has begun.... That's how we keep going."

Inclusiveness is also part of growth strategy at CUFI, which is "not targeting a specific demographic in terms of ethnicity," said Pastor Dumisani Washington, the organization's diversity outreach coordinator.

"We take those allies wherever we can get them, but we continue to do our harvesting in the church community, where we know there's a natural predilection or bias towards standing with Israel based on the teachings of the Christian faith," he said.

Kasim Hafeez, who addressed the CUFI Leadership Summit crowd on his jihadist-turned-Zionist personal story, offered an outsider's perspective on both the success of CUFI and why the organization is a frequent target of anti-Zionist/anti-Semitic criticism.

"Here's why [anti-Semites] hate CUFI, and one simple word explains it all: fear," Hafeez said.

While anti-Semites believe they can easily bully Jews, he said, CUFI's mobilization of the much larger Christian community is more imposing.

"What the haters didn't see was 2015, over 2 million Christians praying for Israel... Mark my words, there is no organization, there are no four letters, that will make an anti-Semite's blood run cold more than C-U-F-I," said Hafeez.

Moving forward, how will CUFI meet its aforementioned goal of doubling its membership to 4 million within three years?

"The specific step that we will have to take is to raise the funds to hire more regional directors and state directors," Hagee told JNS.org. "We need more people in the field meeting and training pastors and concerned Christians how to become a leader in this organization for the benefit of Israel."

CUFI is also bolstering its overseas presence, with plans to start a United Kingdom branch. Hagee said that in the U.K., CUFI would combat anti-Semitism by soliciting the help of spiritual and government leaders "to look this evil tidal wave eye to eye and call it what it is, and get people to admit that a very lackadaisical attitude toward the Jewish people and Israel have created this monster that must be addressed."

"The message here is that Christians are to speak out, publicly, in defense of the Jewish people and the state of Israel, that we are authorized to combat anti-Semitism as aggressively as we possibly can," said Hagee.