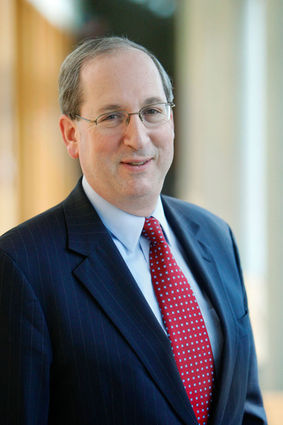 Brandeis University President Frederick Lawrence, the leader of a Jewish-sponsored institution that has been at the center of several recent controversies, sent an email on Friday afternoon that announced he would be stepping down at the end of the current school year.

"After careful consideration, and in close consultation with the Board of Trustees, I have decided to step down as president at the end of this, my fifth academic year," Lawrence wrote. "For the time being, I am looking forward to returning to full-time scholarship and teaching as a senior research scholar at Yale Law School."

Lawrence, a highly regarded civil rights scholar, began his tenure in January 2011. The school has been riddled with controversy since last April, beginning with the withdrawal of an honorary degree for Ayaan Hirsi Ali, a women's rights advocate and a critic of Islam.

The Somalia-born Ali has spoken publicly about her life as a Muslim girl growing up in east Africa. She had undergone genital mutilation and has been an outspoken critic of the practice. Her experiences have led her to make controversial statements about Islam, which ultimately led to the degree revocation and concerns about free speech at Brandeis.

Last July, Brandeis student and blogger Daniel Mael exposed an official university faculty listserv with 92 subscribers, including professors from outside of the university, who had expressed their fear and disdain on issues ranging from U.S. foreign and domestic policy, the "American system," the "Israelists," "President Obomber," and "Hillary 'Obliterate Iran!' Clinton."

The university is named for Louis Brandeis, the first Jewish justice of the U.S. Supreme Court. Yet the listserv reveals a faculty whose opinions include great disdain for Israel and what some have alleged to be blatant anti-Semitism.

"Hating Jews is safe, for now it can be disguised as hating Zionists. Brandeis Professor Donald Hindley can safely say [on the listserv], 'Zionist olive trees grow wondrously on Palestinian corpses. In that way, we combine great trees with our own holocaustic ethnic cleansing,'" wrote Abraham H. Miller, an emeritus professor of political science at the University of Cincinnati, in the New York Observer.

Lawrence himself was a target of the listserv-as was his predecessor, Jehuda Reinharz-through an email stating, "With Reinharz and his Israelization of (and self-enrichment from) the campus... and now Lawrence (NOT of Arabia) and his al-Quds, AIPAC, and the anti-Islam Somali... what do you expect?"

Lawrence does not reference any of these controversies in his resignation letter. Nor does he mention the most recent campus debacle. Following the execution-style murder of two New York City police officers, Brandeis student leader Khadijah Lynch posted on Twitter, "I have no sympathy for the nypd officers who were murdered today," and "lmao, all i just really dont have sympathy for the cops who were shot. i hate this racist f--king country."

Daniel Mael reported the tweets in an article for the Truth Revolt website. This led to public and personal attacks against Mael for exposing Lynch. A Change.org petition campaign claimed her First Amendment rights had been violated, charging that "deliberate targeting and misrepresentation of Khadijah's thoughts as well as the misuse of her personal photos have catalyzed a series of hate speech that puts her life and safety in danger."

Mael was accused of "cyber bullying," even though he himself was the target of personal threats.

Professor Alan Dershowitz, the famed civil rights attorney and liberal icon, defended Mael in the court of public opinion. Shortly after, Dershowitz praised Lawrence's handling of "a difficult job," calling him "a constitutional scholar" who is "deeply committed to free expression, academic freedom and the open exchange of ideas."

"[Lawrence's] unwillingness to censor rabidly anti-Zionist speech-speech with which he fundamentally disagrees-has sometimes been misunderstood as placing Brandeis's imprimatur, or brand, on such expression," Dershowitz wrote. "Nothing could be further from the truth."

Paul Miller is executive director of the Salomon Center for Truth & Accountability.