In Sundance drama, Silverman puts her darkness on display 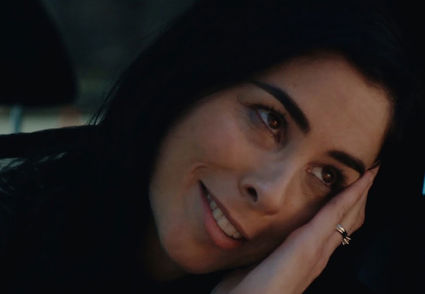 In "I Smile Back," Sarah Silverman is stripped of both bravado and joy.

PARK CITY, Utah (JTA)-The Sarah Silverman that the world knows and loves is a loudmouthed, foulmouthed, ribald comedian who tramples on the boundaries of social decency with sharp purpose and uproarious glee.

The Sarah Silverman who stars in the domestic drama "I Smile Back," which premiered at Sundance, is stripped of both bravado and joy. In the movie, which marks Silverman's first starring dramatic role, she plays Laney, a deeply depressed housewife who veers into self-destructive behavior. She snorts coke in the bathroom, cheats with a friend's husband while the kids are at school, sneaks vodka on the sly and even masturbates with a teddy bear on the floor next to her sleeping daughter. The portrait of Laney that emerges is intense, raw and disturbing. It is also unmistakably, recognizably Silverman.

At least partial credit for that insight goes to Amy Koppelman, who adapted the screenplay from her own novel of the same name, along with co-screenwriter Paige Dylan. Koppelman didn't know much of Silverman's comedy when she heard Silverman on Howard Stern's radio show talking about childhood depression. Instinctually, Koppelman felt that Silverman would be a perfect match for the novel.

"I felt she would understand what I was trying to say in the book," said Koppelman at a post-screening Q&A.

Sure enough, Silverman met with Koppelman and agreed to sign up for the movie.

Silverman has spoken openly about her own struggles with depression, including saying that she never wanted to have children for fear that she would pass her depression on to them.

That alternate scenario is, in many ways, what "I Smile Back" depicts. Silverman's character, Laney, simultaneously loves her children and feels deeply unworthy to be their mother, a vicious paradox that deepens as she lapses and relapses into addiction.

Though the movie can feel like an unrelenting, and at times predictable, slog, Silverman's performance is unflinching. Through a series of brutal scenes, often in long close-ups, Silverman portrays her character's struggles with depression with an intimacy and subtlety that are both powerful and unsettling.

It would be inaccurate to say that Silverman disappears into her character, because so many aspects of Laney are recognizably Silverman-the sensuality, the sing-song Jewish cadences, the theatricality, the unmistakable intelligence. At the same time, Laney's pain and bleakness resonate so uncomfortably in part because they are so clearly Silverman's own, unguarded by the brassiness, earthiness and, yes, the humor of her public persona.

Of course, of course, all the caveats apply: Silverman is not Laney, and Laney is not Silverman, and one shouldn't confuse the acting with the actor. By her own account, Silverman has been quite successful in her own struggles with depression, and she is not an addict. The fact that Silverman, like many comedians, like many artists, like many people, has battled depression is not news. The relationship between comedy and suffering is complicated, and has been debated and dissected to death.

But the vulnerability and melancholy that Silverman displays in "I Smile Back" are so clearly authentic that one can't help reevaluating Silverman's comedy, too. In retrospect, that pain has always been there, hiding in plain sight.

The fact that she can either sublimate that pain into comedy or bare it in her acting doesn't make either one inauthentic. It simply affirms the scope of Silverman's talent as an artist.