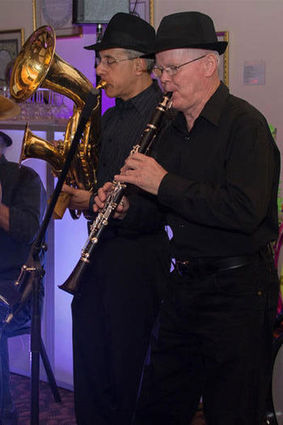 Two of the members of the Klezmer Project

Once again, Israel is "right there" when needed, helping with crisis after crisis, as well as medical breakthroughs.

This article comes directly from the World Jewish Congress Digest (WJC) and I pass it along to you:

"Just as it did after crises in Haiti, Ghana and the Philippines, Israel is stepping up to fight the spread of the African Ebola epidemic that has infected more than 7,000 people.

In addition to sending more than a million shekels worth of medical equipment, IsraAID and the Israel Forum for International Humanitarian Aid are working in the affected countries of West Africa to treat infected patients.

In addition, MASHAV, Israel's Agency for International Development Cooperation of the Foreign Ministry, is working with countries that border on those with the epidemic to help prevent further spread of the disease.

Each unit is accompanied by an Israeli team, including a doctor, a nurse, and technicians to train local personnel.

They are also helping to train their African counterparts on how to educate at-risk populations about precautions against contracting the deadly virus and about managing the stress caused by widespread fear of the virus and its survivors."

Just one month to this day plus 70 years, marks this most important event in our history:

January 27, 1945, marks the 70th anniversary of the liberation of Auschwitz, the largest of the concentration camps established by the Nazi regime in Poland, where an estimated 1.1 million people (most of whom were Jews) were murdered.

Auschwitz is not only the world's biggest Jewish graveyard, it is also the primary symbol of the Holocaust, and the site of the biggest organized mass murder in human history.

Most folks who know me personally, know that I love music... the great American song book with composers like the Gershwins, Cole Porter, Irving Berlin, etc, and all forms of jazz and "standards."

What they may not know about me is that I adore Klezmer music and I'm sure you will too. It is so happy sounding and so wonderful!

The featured entertainment for the afternoon is The Klezmer Project, eight very talented musicians that will have you (and me) jumping and clapping and dancing and swaying, etc. all over the place.

The Klezmer Project is Central Florida's premier Klezmer band. This eight-member band was established in 2008 by STEVEN KOTZIN, for the purpose of education and exposing its audiences to both the roots of Jewish music and of generations past.

The Klezmer Project is participating in today's revival of the Klezmer music styling of the early 1900s, of which much of the Yiddish music began its assimilation with American jazz.

On Sunday, they hope to share the joy that Klezmer music has to offer and to once again experience today the Jewish music of yesterday.

As usual, there will be refreshments following the entertainment. Bring your friends. Everyone is welcome!

The cost, including refreshments, is $5 for COS Senior members; $8 for all others. There will also be three raffles, one for $1 or six for $5

(This promises to be a happy event! I don't want to miss it and you shouldn't either.)

Did you catch the 40th anniversary special of "Saturday Night Live" on television recently? (It was live and really funny.)

Most of all it made me homesick for the "Big Apple, "Gotham City... you know... Nu Yawk.

Although I'm living in Central Florida for more than half a century, New York will always be my hometown... Brooklyn, to be exact.

And more about laughter...

I recently mentioned the Laughter Yoga Club at the Jewish Community Center in this column. I was very curious about it, so one Monday my spouse and I dropped in on a class led by DANA KAPLAN.

So smiling ourselves, my spouse and I entered the class and joined in.

We all started (at Dana's direction) with hearty "Ho Ho Ha Ha" sounds of laughter... and then proceeded to more laughter, which, I must admit, caused us to laugh... and prompted me to ask if we were on Candid Camera!

The cost is $5 per class; free to JCC members.

I'm NOT admitting my age...

The Fifth Annual Kinneret Council on Aging "8 over 80 Honorary Dinner" will be held this Sunday, March 1st at Kinneret Apartments Delaney dining room in Orlando.

What a fabulous event. What fabulous people being honored!

With all the awful weather... snow, rain, etc., I thought I would pass this along:

Jacob is a very religious man. One day, a nearby river floods its banks and rushes into town, forcing Jacob to climb onto his garage roof. Soon, a man in a boat comes along and tells Jacob to get in.

Jacob says, "That's very kind of you, but no thanks. God will take care of me."

So, the boat leaves.

The water rises and Jacob has to climb onto the roof of his house. Another man in a boat comes along and tells Jacob to get in.

The water rises further and soon Jacob is clinging to his chimney. Then a helicopter arrives and lowers a ladder. The helicopter pilot tells Jacob to climb up the ladder.

The pilot says, "Are you really sure?"

Jacob says, "Yes, I'm sure that God will take care of me."

Finally, the water rises too high and Jacob drowns. He goes up to Heaven and is met by God.

Jacob says to God, "You told me you would take care of me. What happened?"

God replies, "Well, I sent you two boats and a helicopter. What else did you want me to do?"