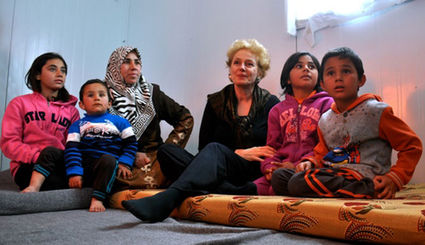 Dr. Georgette Bennett, founder of the Multifaith Alliance for Syrian Refugees in Jordan, with a family of Syrian refugees at the Za'atari refugee camp in Jordan this week.

When members of the pro-Israel community think of populations in need of relief, Syrian refugees are probably not one of the first groups coming to mind. After all, the proverbial elephant in the room is that the Syrian civil war is a conflict between two enemies of Israel: Iran-supported President Bashar al-Assad and Hezbollah on one side, and jihadists linked with the al-Qaeda and Islamic State terror groups among the Assad regime's opponents.

But as the fourth anniversary of the Syrian civil war (March 15) approaches, an interfaith group of more than 35 organizations is raising funds and awareness for the victims who have been displaced by the conflict, rather than focusing on its combatants. At the same time, while the Multifaith Alliance for Syrian Refugees in Jordan (MFA) makes a case for putting politics aside and addressing a humanitarian crisis, some of the alliance's organizers also note the effort's possible boon for Israel.

"Jordan is a peace partner of Israel," says Alan Gill, CEO of the American Jewish Joint Distribution Committee (JDC), which along with MFA founder Dr. Georgette Bennett spearheaded the creation of the alliance. "It's in Israel's strategic interest, as well as one could contend in America's strategic interest, to make sure that we do everything we can to help Jordan cope with I believe unprecedentedly large refugee numbers coming into their country. Jordan is not a large enough country to easily absorb-practically overnight, in the scheme of history-such a huge percentage of its own population."

The latest United Nations estimate pegs the Syrian refugee population in Jordan at 619,000, which is about 10 percent of Jordan's total population. On Feb. 18, New York University (NYU) will host "A Conversation on the Syrian Refugee Crisis," featuring Bennett and Rabbi Lord Jonathan Sacks, the former chief rabbi of the United Kingdom.

The MFA raises emergency funds for clean water, housing, and medical aid. The funds are allocated directly to disaster-relief agencies working on the ground in Jordan. Bennett, a philanthropist and the president of the Tanenbaum Center for Interreligious Understanding, explains that the MFA's humanitarian effort has led to "a new channel that is developing between Israeli and Syrian civil society actors."

"What people are completely unaware of is the courageous Israeli NGOs (nongovernmental organizations) that are providing aid in the entire region for Syrian refugees," Bennett tells JNS.org. "So as Syrian refugees encounter Israelis and Jews who are there to help them, they're starting to question decades of indoctrination in which they were taught, 'Israel is the enemy, Israel wants to take our land and turn us into refugees, Israelis want to kill us, we better kill them before they kill us.' This is standard teaching in Syria, according to refugees with whom we work. But with these encounters with Israelis and Jews, what they're saying is, 'Wait a minute, it's not Israelis who are killing us and turning us into refugees, it's our own government.'"

The MFA has given briefings for the European Parliament, the European Commission, and the British Parliament on the Syrian refugee issue, in addition to going on other speaking tours. One of the speaking tours features a Syrian Muslim refugee and humanitarian activist, Amin Ahmed, in tandem with Anat Gilan, the leader of an Israeli humanitarian relief NGO. (Both speaker names given here are pseudonyms, for security reasons. The Israeli NGO's name is not disclosed for the same reason.) At presentations, Amin discusses how he was raised to hate Jews and Israel, but that his outlook changed after meeting an Israeli who wanted to help Syrian victims.

While the perception of Israel might improve due to testimony from Syrian refugees, that is "not a political thing," Bennett says.

"That has nothing to do with whether or not one supports Israeli policy," she says. "What it has to do with is that there is a whole other story about this country, and to the extent that the other story gets told, it enhances the possibility for diplomacy, it enhances the possibility for peace, because it expands the group of people who are willing to communicate with each other."

The MFA is an expansion of the initial Jewish Coalition for Syrian Refugees in Jordan, which was founded with 16 members in 2013 and still exists on its own as a subgroup of the Jewish Coalition for Disaster Relief. JDC's Gill recalls when Bennett first approached him about the Jewish coalition, "it was really the tekiah moment, the wake-up call to action," referencing one variety of the Rosh Hashanah shofar blasts.

"I immediately agreed that this requires a Jewish voice and a Jewish response," Gill tells JNS.org.

"Needless to say, there's so much happening in the world today, and it's very hard to get people to focus on the humanitarian fallout of a conflict as opposed to the conflict itself," he adds. "So the more strength that we have that's combined, in terms of messaging that this is indeed a multifaith concern, we welcome that."

The Feb. 18 event at NYU will begin with an exploration of the Jewish imperative to help others, led by Rabbi Sacks. Naturally, MFA members of other religions also make a faith-based humanitarian case for aiding Syrian refugees.

"I think that the issue with the Syrian refugees is a human rights issue," says Evangelical Christian minister Rev. Marcos Miranda, president of Christian Clergy International, an organization dedicated to ending the persecution of Christians and other minority faith groups. "As many of our martyrs have said in the past, and many of our leaders that are still alive continue to say, when injustices are affecting any human being anywhere in the world, it's an issue that is affecting us."

Miranda says his organization's primary goal within the alliance is to "get the word out," given the barrier of "the lack of knowledge and education" on Syrian refugees-and other global issues of concern-in the Pentecostal and Evangelical communities.

Besides the awareness challenge, Miranda cites fear as a possible obstacle to Christian activism on the Syrian refugee issue-and even an impediment to a Christian response to the persecution of members of their own faith. When Miranda spoke at a recent U.N. rally on human rights, he says it was "difficult to get churches that I approached to join us."

"[Christians] see the news, they see what's going on, with all types of groups, including groups like ISIS (Islamic State) right now, and they feel that if they get involved, somehow they're going to be the subject of some sort of retaliation," Miranda says. "They feel that if they make their voices heard, that they're going to become a target in some way. There is a reality to this fear within our churches."

Given these potential roadblocks-in addition to what Miranda calls a mentality that the Syrian refugee crisis is "over there, it's not over here"-Miranda says he tries to "drive home the point that what's affecting them over there should be affecting us over here."

JDC's Gill also cites the awareness issue, saying that when JDC fundraises for natural disasters or human-induced crises, "we need the news." Then, from the Jewish community's perspective, he says there is the challenge of "trying to have a conversation with people that immediately say, 'Why would we want to help refugees from a country that is formally at a state of war with Israel?'"

"And the answer to us is, there's a humanitarian concern here," Gill says. "So many innocents are suffering, and it's really imperative that we as a Jewish people, and as a multi-faith alliance, understand that we have women and children that are just suffering terribly. It's the right thing to do."

While declining to disclose how much money the MFA has raised overall, Bennett calls it "a very respectable number" coming mostly from the Jewish community. She also singles out the efforts of the alliance's Lutheran Christian partners, who have raised more than $1 million.

"It has been very difficult raising money around this crisis," she says. "That's not just our experience, that's pretty much the universal experience, that this crisis has not received the attention or the funding that so many other crises have received, and one can speculate what the causes are."

One possible cause is the complex nature of the Syrian civil war, whose death toll has surpassed 200,000.

"I think one of the issues is that it's hard to know who the good guys are, because it's not only the Syrian regime that has committed atrocities, it's also the extremists [among the rebels] that have come in, the jihadis that have committed atrocities," Bennett says. "And then in between, you have the moderates who are not only fighting the regime but fighting the extremists, so their efforts get very diluted. So it's hard to know who to root for."

Despite the obstacles, Bennett says the MFA is banking on the hope that "if we do this track-two diplomacy, in which we have started to become engaged, we will have laid the groundwork for a different kind of relationship between Syria and Israel and the future, one in which they can be partners rather than enemies."

She adds, "Out of this horrific tragedy is emerging this glimmer of hope, which if it reaches a critical mass, could be planting the seeds for some future stability in the region."