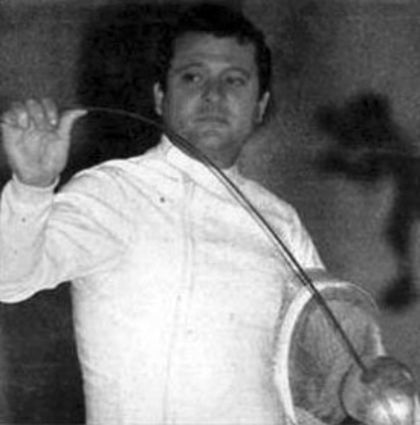 Dan Alon, an Israeli fencer, in 1972 at the Munich Olympics.

On Monday, March 16, Chabad of Lake Mary will host an evening with Dan Alon, one of five Israeli athletes who survived the Munich Massacre over 40 years ago during the Olympics of 1972. The event will be held at the Westin Lake Mary at 7:30 p.m.

Alon recently authored a book on his harrowing experience in Munich and its lasting effect on his life, titled "Munich Memoir."

In the summer of 1972, Palestinian terrorist group Black September killed 11 Israelis who had travelled to Munich to participate in the international Olympic games. A German police officer was also among the victims.

"It was a great time to be there," Alon remembered of the Munich Olympics. "We were together-friendship-and we were only discussing sports. We were never talking about politics."

Tensions between Israelis and Palestinians were at an all-time high, but Alon and his fellow competitors knew that was not what the Olympics were about.

"We had a good time together," Alon recalled. That was until 4:30 a.m. on Sept. 5, when everything changed.

"We were all asleep. Eight Palestinians attacked our building," Alon said. "They went to apartment No. 1, and they caught all the coaches, and they killed two Israeli athletes. Then, they went out and went to No. 3."

Alon was in apartment No. 2. He says he and four other teammates sat in petrified silence, listening for an hour as the terrorists took nine athletes hostage.

"We saw how they threw out the bodies of the wrestlers on the pavement," Alon remembered.

It was too late to fight back.

It was a choice he believes saved his life.

The hostage situation would end in a shootout with German authorities later that day. All nine hostages, along with five of their captors and one German police officer, were killed.

Born and raised in Tel Aviv in 1945, Alon, a married father of three, enjoyed a career as managing director of a plastics packaging company. As Israel's champion fencer for many years-he began playing at the age of 12-Alon participated in several international competitions.

On Aug. 29, 1972, he competed successfully in Munich, beating many opponents. On the morning of Sept. 5, the horror began with the kidnapping of Israeli athletes, culminating in cold-blooded murder.

Alon miraculously escaped; throughout the attack, the games continued as scheduled. After a failed rescue effort, he was assigned the morbid task of reentering the Israeli compound and gathering the belongings of his murdered comrades. Shortly afterwards, on the eve of the Jewish New Year, Alon flew back to Israel with eleven coffins draped in Israeli flags. He quit fencing. 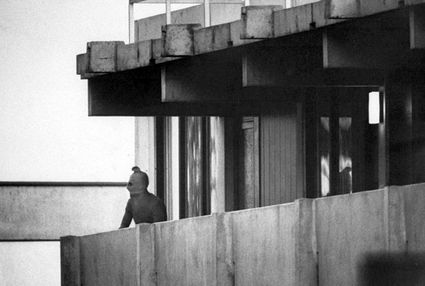 A Black September terrorist looks from the balcony of an apartment where Israeli Olympic team members are held hostage, Munich, September 1972.

Alon still maintains contact with the families of the fallen athletes.

"With recent events around the world, we are reminded that as long as the senseless hatred continues to rear its ugly head, we must combat it with increasing acts of loving kindness along with responsible security measures," Rabbi Yanky Majesky said. "Dan Alon's remarkable story of personal survival is compelling to anyone who cares about human suffering, global terror, professional sports and the Middle East."

For more information or to make reservations please visit http://www.JewishNorthOrlando.com or call 407-878-3011

Tickets are $15 if purchased before March 10 and $20 after March 10. Sponsors of $360 will have tickets for two and a private meeting and snacks with the speaker before the event. Dan Alon's autographed book will be available for purchase after the event.