New study: Over half of Jewish students face anti-Semitism in U.S. colleges 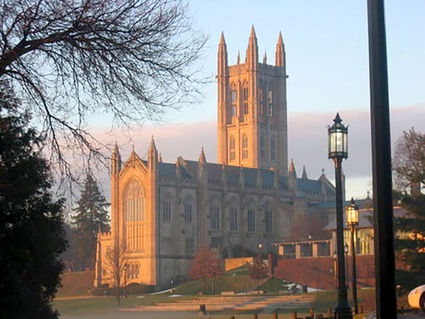 A study titled "National Demographic Survey of American Jewish College Students 2014," conducted in the spring of 2014 by Trinity College in Hartford, Connecticut, revealed that over half of Jewish college students have experienced anti-Semitism on campus.

Trinity professors Barry Kosmin and Ariela Keysar led the research project, under the guidance of Kenneth L. Marcus, president of the Louis D. Brandeis Center for Human Rights Under Law and past head of the U.S. Department of Education's Office for Civil Rights.

Of the 1,157 students in the sample, 54 percent reported instances of anti-Semitism on campus during the first six months of the 2013-2014 academic year. The data provide a snapshot of the types, context, and location of anti-Semitism as experienced by a large national sample of Jewish students at university and four-year college campuses.

The rates of victimization for students with different social characteristics-such as type of campus, year of study, academic major, demographics, religiosity, or politics-ranged from a low of 44 percent to a high of 73 percent. There was only a slight variation in the rates across the regions of the United States, strongly suggesting that anti-Semitism on campus is a nationwide problem.

"The patterns and high rates of anti-Semitism that were reported were surprising. Rather than being localized to a few campuses or restricted to politically active or religious students, this problem is widespread," explained Kosmin. Jewish students are subjected to both traditional prejudice and the new political anti-Semitism."

The survey found that female students were more likely than their male counterparts to report anti-Semitism.

"Jewish women seem to feel more vulnerable on campus, with 59 percent of female students versus 51 percent of males telling us that they have personally witnessed or experienced anti-Semitism," said Keysar. "This gender gap is alarming and needs to be further explored."

Historically, Orthodox Jewish men were most likely targets of hate, as they tend to be easily identifiable. This study revealed that on college campuses, "Conservative and Reform Jewish students are more likely than Orthodox students to report being victims. Membership in a Jewish campus organization also raises the likelihood of a student reporting anti-Semitism."

In the foreword to the Anti-Semitism Report, Brandeis Center's Kenneth Marcus writes:

We hear frequently from college students who find that their experiences of anti-Semitism are not taken seriously. A decade ago, Jewish college students spoke of the vindication that they felt when the U.S. Civil Rights Commission gave voice to their concerns. This report should provide a similar vindication, since it indicates that the scope of this problem is greater than most observers had realized.

This study was conducted prior to last summer's war between Hamas and Israel that led to an increase in anti-Semitism worldwide.

Recent acts of singling out and discriminating against Jewish students and Israel on college campuses, support the study findings.

UCLA student council members recently opposed confirmation of a student to a subcommittee solely because she is Jewish.

Jewish students at the University of California at Davis awoke to swastikas spray-painted on their fraternity house. This occurred 48 hours after the UCD student government voted to divest from Israel, with a council member proclaiming, "Hamas and Sharia law have taken over UC Davis. Brb crying over the resilience... Israel will fall. Insha'Allah."

Student governments at Northwestern University and Stanford recently singled out the Jewish State, passing anti-Israel divestment resolutions, while ignoring atrocities committed by nations such as Iran, Syria and Saudi Arabia.

His byline can be found in the New York Post, Fox News, Washington Times, Chicago Tribune, Jerusalem Post and The Hill. His work has been featured on the Drudge Report and news sites across the globe.  As a respected authority on national politics, Middle East policy and media accountability, Paul has been quoted and sourced by the New York Times, Fox News, Chicago Tribune and the Washington Times.