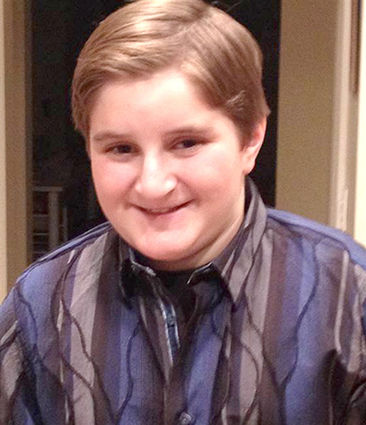 Brody Criz wants to be like Jim Carrey when he grows up. He wants to be known for "being funny." So when it came time to send out his bar mitzvah invitations, this creative young man, a seventh grader at Caruso Middle School in Deerfield, Illinois, went all out with a video produced by Xpress Video Productions and put it on YouTube. Becoming a "Billboard Top 5 Mitzvah Invitation" it has gotten more than 1,970,136 views in just three weeks.

In the video, Criz parodied five popular songs, including Pharrel Williams' "Happy" ("Clap along if you feel like Old Testament is the truth/ Clap along if you're 13; that means you're no longer a youth") and Idina Menzel's "Let it Go" ("All of me/would love all of you/ to come attend by mitzvah party/ my mom will probably cry and get all snotty") while sporting a black wig in one scene and appearing to be naked as he danced to "Blurred Lines" by Robin Thicke (he wasn't naked, he did have a bathing suit on under the blurred block).

Criz can't take all the credit. His mom, Ali, first suggested the idea of parodying popular songs. "Brody is a hilarious kid," she told Chris Serico of Today. "I knew he might want to do something like that."

"I love to make people laugh," he told Today. "It was a once-in-a-lifetime experience... so I wanted to go above and beyond with my bar mitzvah invitation."

Criz wasn't the only star in the 4-minute clip. His dad, Jesse; brother, Jared, 14; sister, Simone, 10; and 7-month-old pug, Butch, had cameo appearances. 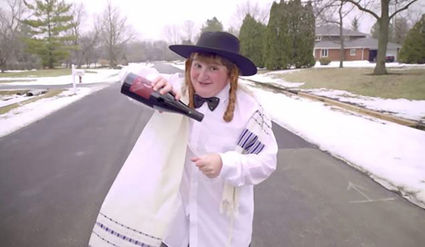 Looking a little Hasidic in one scene of his bar mitzvah video.

Criz isn't all about crazy wacky videos. His passion is volunteer work with the Northern Suburban Special Recreation Association, where he helps people with special needs.

"I love helping others, and they're really nice people. I just think it's nice to give back," he told Today.

Still, Criz enjoyed his "15 minutes of fame" and his video drew the attention of People magazine, the Chicago Tribune, the Huffington Post, Slate, the NY Daily News and Today.