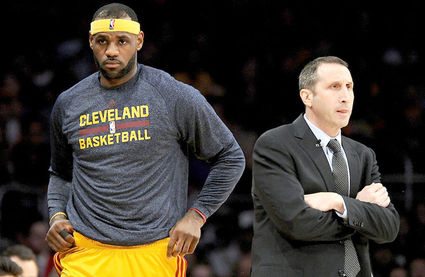 Coach David Blatt and star player LeBron James both say that Blatt has made the needed adjustments in his rookie season guiding the Cleveland Cavaliers.

WASHINGTON (JTA)-With the clock winding down on a recent game here, Cleveland Cavaliers coach David Blatt was still barking out instructions to his players despite enjoying a late 40-point lead over the Washington Wizards.

Things didn't come quite as easy early this season for the rookie NBA coach and his team, which had great expectations with the return of four-time MVP LeBron James via free agency from the Miami Heat.

Cleveland stumbled to a 19-20 record, leading some pundits to question Blatt's qualifications for the world's premier basketball league and minimizing his success with Maccabi Tel Aviv, as well as Russia's national team. Some also charged that James, who missed a few weeks with a knee injury, was running the team, anyway.

But 18 wins in the past 21 games have shushed the critics and vaulted the Cavaliers to a 37-23 record heading into Sunday, a half-game behind Chicago in the Central Division.

All of which leaves Blatt, James and Co. feeling far better about their season.

"I've gone through my own learning curve that I've obviously worked through," Blatt, 55, told JTA in an interview. "Two-thirds through the regular season I've become a lot more comfortable, and a lot more cognizant of the things that are necessary to make a winning situation on an NBA team.

"We've gone through the normal maturation process of a new team," he added, referring to a roster with just three holdovers from last season.

James' return from injury and the additions of Mozgov, Smith and Shumpert "were the turning points" this season, Blatt said.

Mozgov, in fact, was a familiar face, having played for Blatt on Russia's national team and winning a bronze medal together at the 2012 Olympics.

The 7-foot-1 center said Blatt has adapted well from European basketball to the NBA.

"The NBA is so different than overseas [basketball], and he's doing a good job," Mozgov said. "The coach knows me, he knows how to use players the right way."

Another Cavalier qualified to compare domestic and overseas hoops is Smith, who played one season in China. The cultural richness experienced by Blatt-the Boston native played professional basketball in Israel and has coached for six countries' teams, leading Tel Aviv to five national titles and last year's Euroleague championship-has to be an advantage, Smith said.

"He's a player's coach. He's very into the guys, he cares about his team, he cares about the players off the court just as well as on the court. That's what you need," Smith said. "I noticed that right away. My first conversation, he asked how I was doing-not so much as a basketball player but as a person. That's a great quality."

James said of his relationship with Blatt, "Every single day it grows. I respect him as a coach, he respects me as a leader of this team and we have some good chemistry right now. We're going to continue to grow for the betterment of the team."

"It's just like for a rookie NBA player. Guys get better, they know the game, they start to learn it more and more, they know how to approach it every day," James said. "This is not an easy situation for him. He wasn't hired with this roster, but I don't think he's shied away from it. He knows the game, and I'm happy to have him at the helm."

Blatt is reveling in the experience. Coaching James is "obviously a great opportunity," since he's "a great player and has a fabulously high basketball IQ and a strong, strong desire to win and to help his team," Blatt said.

"He's also coming back in a very special kind of situation, coming back home and taking the responsibility of trying to lead a new group to heights that they have not known for quite some time."

Blatt, who is Jewish, recently went home, too, flying back to Tel Aviv during the All-Star break to see his wife and four children, including twin girls who are college students at the Interdisciplinary Center in Herzliya. The family has not yet visited Blatt this season.

"It was great to be back, but it was also great to come back to Cleveland," he said.

If they maintain their improved play, the Cavaliers are well positioned to challenge for the Eastern Conference's second seed. Come April, the drama in their opening-round playoff series could be exquisite, with Cleveland possibly facing James' former Miami squad.

"I think we've put ourselves in a good situation for the last part of the season and for the playoffs," Blatt said. "We're in pretty good shape."