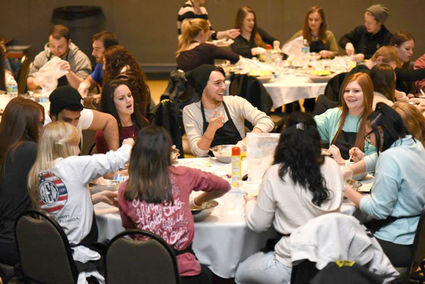 This article first appeared on Knightly News and the website is listed knighlynews.ucf.edu

Challah is a loaf of white leavened bread, typically plaited in form, traditionally baked to celebrate the Jewish Sabbath. Chaim Lipskier calls the act of making challah a mitzvah, a commandment of the Torah.

The event teaches participants how to mix, knead and shape their own challah bread. Additionally, challah was made and delivered to the Brookdale Island Lake, an assisted living home, on Friday, Feb. 20 by Chabad at UCF students.

"For Jewish students, challah brings back memories from their Shabbat dinners at home; we serve challah at Shabbat dinner [and make] challah at Jewish Sunday School. [It] always brings back great memories. Many people do not know the origin of the mitzvah and by doing it on a wide scale many people can learn the traditions behind this amazing mitzvah," Rivkie Lipskier said.

This was the case for 20-year-old Leor Gawergun, a senior majoring in interdisciplinary studies, who said the event reminded him of being in elementary school.

"I went to a Jewish elementary school, and on Fridays we would have a chance to make our own challah to take home to our parents. It was a very fun experience to have while growing up," Gawergun said, also stating that the challah bake was an amazing event and a great opportunity to connect with many Jewish and non-Jewish students on campus for a great cause.

"It also allowed students to learn about a Jewish tradition that has been passed down for many years. I hope it is something Chabad at UCF continues to do for the years to come," Gawergun said.

Students were given complimentary desserts and water to snack on before Rivkie Lipskier started the challah demonstration. On the table, there was a silver mixing bowl, a bag of flour, a packet of yeast, an egg, a small bottle of water, and cup of chocolate chips to add to the dough.

Soon into the demonstration, the air was dusted with the smell of flour. The sounds of laughter filled the room as students wiped spilled flour off of their aprons, and often, their faces and shoes.

For 20-year-old Alana Villanueva, a junior health science major, the Mega Challah Bake was the first time she made challah.

"Making the challah from scratch, I felt the unity in the room-all of us doing something with one purpose," Villanueva said.

Chaim Lipskier called the event a success and said they would open the event to more students the next time.

"I could not be happier with the way it turned out. It was a huge success with the entire ballroom filling up and all 200 students having a great time," Lipskier said.

For more information about Chabad at UCF please visit its website, http://www.jewishucf.com.