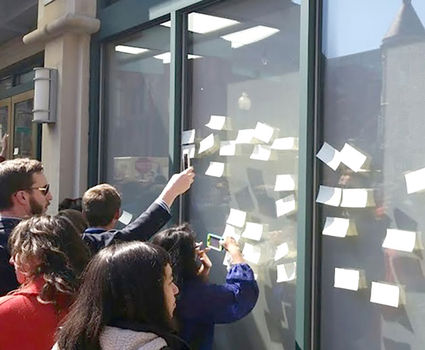 J Street U students stick Post-it notes on the windows of the Hillel International building that read, 'Dear Eric Fingerhut, you cancelled on [insert name].' Students were then ushered back to the Washington Convention Center by J Street staffers as the Post-It Notes began to unstick from the building and float away in the wind.

WASHINGTON (JTA)-At noon Monday, several hundred students marched through the bright March sunshine from the J Street conference at the Washington Convention Center for a protest.

"This is not a march!" organizers pleaded as the orderly group moved south from the Carnegie Library to the headquarters of Hillel International.

With Hillel staffers mostly sequestered inside, student leaders of the self-described "pro-Israel, pro-peace" organization stood on folding chairs, held a megaphone to their mouths and displayed a placard asking "Who is tying your hands?" Each student then dropped a pre-printed letter addressed to Hillel International President Eric Fingerhut into a large cardboard box and pasted yellow sticky notes scrawled with the words "You cancelled on..." with a student name filled in.

The protest was aimed at Fingerhut's decision to withdraw from a speaking engagement at the conference, citing the presence of "problematic" speakers on the schedule. A Hillel spokesman initially cited the participation of longtime Palestinian negotiator Saeb Erekat, though the organization subsequently backtracked, saying the conference agenda overall was concerning.

"I think it's ridiculous that Fingerhut clearly wanted to meet with us," said Hannah Nayowith of Carleton College in Minnesota, "but conversation on Israel is so stultifying and controlled by a small number of wealthy people. Donors are valued above students."

Hillel has said the decision to withdraw was made in consultation with the "full range" of Hillel stakeholders.

Sandwiched between an increasingly robust anti-Zionist movement and a Jewish communal establishment still wary of J Street, the 1,100 student activists at the conference have found themselves on the front lines of debate over Israeli policy. Many of the students, veterans of campus fights over divestment resolutions, say the climate has become deeply polarized.

"We are in an unfortunate moment where campus has become this battleground for polarized views on how to go about being engaged with this conflict," said Rabbi Rachel Gartner, the Jewish chaplaincy director at Georgetown University in Washington, DC. "These students have become the soldiers for approaches to the conflict that come from national organizations. And they are falling in the field. They are burnt out, exhausted. They say to me, 'I didn't come to college for this. I came to college to learn.' They are suffering from the stress of it, from how much they are carrying."

At Oberlin College in Ohio, senior Noa Fleischacker said there are three groups that do work on Israel: Oberlin Zionists, J Street and Students for A Free Palestine. In 2013, SFP supported a student senate resolution calling on the school to divest from six companies that do business with Israel. Oberlin Zionists and the Oberlin J Street chapter opposed it.

"Divestment was incredibly polarizing for our campus," Fleischacker said. "A lot of people who I didn't realize cared came out of the woodwork and expressed either discomfort or excitement and support. Campus kind of exploded [during] the divestment campaign."

In 2014, the student assembly at Wesleyan University in Connecticut debated a comparable divestment measure. Junior Maya Berkman said the measure was similarly divisive.

"Many students became involved pretty quickly and those [student assembly] sessions were widely attended; it became fairly emotional," Berkman said. "Different student groups and also individuals had a difficult time figuring out where they wanted to fall on this issue. I felt like it pulled everyone apart rather than allowing people to feel safe engaging in the nuances of the issues."

J Street officially opposes divestment, and several students at the conference were veterans of efforts to defeat such measures on their campuses. But even so, some schools have seen tension between J Street students and some of their peers to their right.

"I think it's really tragic that we are in a position that people feel threatened to express their positions on Israel," said Eli Philip, a Brandeis University senior who lodged a harassment complaint against a fellow Jewish student that he later withdrew. "That can't be healthy for our community, for the Jewish community, for the pro-Israel community. What we do at J Street... is to empower folks to speak out and enable folks to express their opinion."

For these students, Fingerhut's decision to eschew an appearance at the conference is emblematic of the truncated nature of the Israel debate. A letter delivered by the students to Hillel's offices on Monday read in part, "Who is Hillel meant to serve? A small group of donors, or the thousands of students who are the future of our communities? Despite hearing that J Street U students are an important part of the Hillel community, we believe that actions speak louder than words."

By Monday afternoon, Fingerhut's office had agreed to a request by J Street U, the campus arm of J Street, for an on-the-record meeting between the J Street U national student board and members of Hillel's board of directors.

"We are looking forward to seriously and publicly engaging with Hillel International on the issues we've raised over the last few weeks," said Benjy Cannon, J Street U's student board president, in response.

Sarah Turbow, J Street U's director, noted that despite the decision by Fingerhut, Hillel was well represented at the conference. Some 30 Hillel chapters (out of 550) and 40 Hillel staffers from across the country attended, as did Hillel's vice president for social entrepreneurship, Sheila Katz, who participated in a breakfast for Hillel members conference.

Turbow said the discrepancy between Hillel International's position and reality on the ground is "a question of students versus stakeholders" and "a manifestation of dynamics that exist across the Jewish community."

In a letter to students who had contacted him about the J Street conference, Fingerhut reiterated that J Street's voice should be heard in the communal conversation.

"We also clearly have work to do in the Jewish community at large to be one people that respects, honors and celebrates its diversity rather than fearing it," Fingerhut wrote. "This incident taught me just how deep the divide is. I don't yet have all the answers to how we will bridge this divide, but as Hillel's president, I am committed to working with you to find them and I have no doubt we will be successful."