A whole lot of celebration going on! 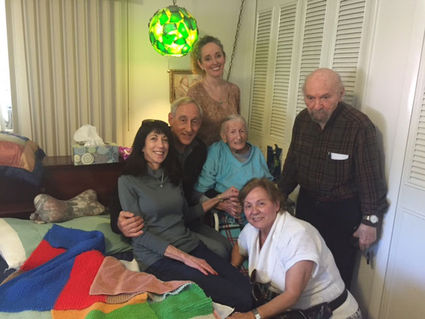 On Feb. 18, Sally Salamy (in blue top), celebrated her 103rd birthday with her husband, Maurice, (who turned 92 on April 4 and is standing to the right of Sally) and many younger friends shown here (l-r) Gayle and Steven Stein, Karen Bogart and Viviane Flax.

Sally and Maurice also celebrated their 67th wedding anniversary on April 1. The couple joined Congregation Ohev Shalom in 1963 and in 2012, they renewed their vows at the synagogue, when Sally was a mere 100.

Up until six months ago, Sally was staying active and dancing twice a week. Still spry, she relaxes more nowadays.