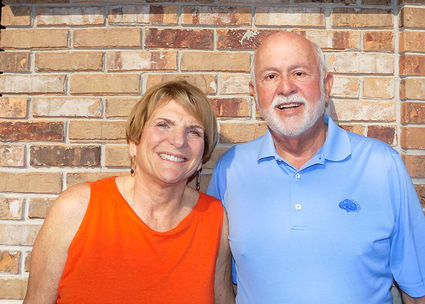 Sheryl and Julian Meitin, co-founders of the Jewish Pavilion

On Sunday, May 3, the Pavilion Golf Society (PGS) will host its third annual tournament honoring Jewish Pavilion founders and golf aficionados, Sheryl and Julian Meitin, at Alaqua Country Club in Longwood. The longtime Temple Israel members co-founded the Jewish Pavilion in 2004, and the outreach program for Jewish residents in elder homes has enriched the lives of thousands of seniors ever since.

"Sheryl and Julian Meitin have been the 'ace in the hole' for the Jewish Pavilion, not to mention a host of other Jewish and community organizations. Thanks to the generosity and the persistence of the Meitin family, Jewish residents in long-term care can now feel at home in over 50 facilities throughout Greater Orlando," said Jewish Pavilion Executive Director Nancy Ludin.

"I can't think of a more appropriate way to celebrate the two things I am most passionate about, The Jewish Pavilion and golf," stated Sheryl, explaining that her passion for the elderly stems from the close relationship that Julian maintained with his grandparents, whom he visited weekly throughout their lifetime. She stated, "I have great respect for how his grandparents were treated (when they became elderly). There was much more involved than putting them in a facility. Rather, it was nurturing the facility they were in to help them meet the needs of his grandparents."

Sheryl traces her passion for golf back to the time when she was just three years old. Her parents were founders of Twin Orchard Country Club in Long Grove, Illinois, where the Chicago native golfed all summer long throughout her childhood and teen years. She has fond memories of playing four holes with her father from the time she was just a little girl.

"I always loved golf, and when my father passed in his early 60s, it felt like home to me. I always think of him when I hit a good shot, and the way he would smile," she said.

Today, the couple of 46 years share a passion for golf. They golf regularly with friends, and share a weekly golf date with one another. Golf has continued to be a family affair and adult sons, Ross (Sharon), and Josh will join their parents for a round of golf at the tournament.

The Meitins became concerned with the needs of Orlando's Jewish seniors 15 years ago, when several of Julian's aunts and uncles were aging, and in need of care. Julian noted that they were unable to find a facility that entirely met the needs of their family members. Feeling dissatisfied, Sheryl became interested in the idea of pursuing a Jewish home for the elderly. She began to talk about "rebirthing the Jewish nursing home" with friend, Claire Chepenik, who was active with Kinneret Council on Aging, and shared a passion for elders and their care. Sheryl was undeterred by the fact that several years prior a Jewish facility had had only a short run in the Maitland area, and felt that the community had the necessary supports for a second try.

Not long after their discussion, a possible site for a Jewish home came to Meitin's attention. She and Chepenik approached the powers that be at the Westminster Presbyterian Home in Orlando, which had room for additional residents. The two women were able to secure a wing from Westminster to house 20 Jewish residents. It was their hope to fill the wing with another 20 residents so they could have the structure of nursing home within a nursing home. Meitin revealed that Kinneret was very supportive, and supplied some of the necessary funding to keep the wing operational.

Linda Kaufman served as the first manager of the organization that would evolve to become "The Jewish Pavilion." While Kaufman handled day-to-day operations, Meitin and Chepenik taught the kitchen staff how to create kosher style meals. Meitin added, "We followed kashrut the best we could. Amira also sent in meals." The two women put in eight-hour days, visiting with residents and ensuring the quality of care. Meitin credits a loyal group of volunteers who preceded the current "Friends Board" with helping the facility run smoothly. Julian noted that the late Hank Goldberg ran services, and his mother, Bessie, was the "reigning matriarch" of the wing.

In 2004, a dark cloud overcame the women's efforts, as a series of hurricanes whipped through the Orlando area. As undamaged nursing space was needed, the main operator reclaimed the space that had been rented to the Jewish home. When the Jewish wing folded, Sheryl wasn't ready to give up. In 2006 she, Chepenik and a team from Kinneret met to discuss the issue. Sheryl stated, "It was decided that rather than building a nursing home, as such, we would go to certain facilities and bring the Pavilion to them."

Mark Silverberg, then president of Kinneret, suggested they name the organization "The Jewish Pavilion," as it provided coverage for the needs of Jewish residents at facilities throughout Greater Orlando.

In its earliest days in 2006, the Pavilion was housed within Julian Meitin's small office in Altamonte Springs. Arlene Van De Rijn became the first formal head of the Pavilion, and started programming, got volunteers, and kept the organization growing.

"Many more people became involved. We invited 20 women to the Citrus Club to discuss the different directions we could take the Pavilion," Sheryl stated. "Our discussion centered on how we could make life better for seniors in facilities."

Julian added that a critical issue became helping seniors with no family around.

As the Pavilion grew, its need for space increased. Julian recalled that his office space became increasingly crowded with Pavilion staffers and volunteers. In 2008, a generous donation from the Meitin Children's Philanthropic Fund provided the Pavilion with its permanent home in an office condominium in the same office complex.

"When the duplicate office next door became available, it was an obvious move for the Pavilion to get its own space," Julian stated.

Sheryl credits Nancy Ludin, who has been the executive director since 2009, with the tremendous growth of the Pavilion.

"Nancy is energetic, personable and never gives up; she is always thinking of new ways to create awareness, and to raise funds. If it wasn't for Nancy leading the way, the Pavilion wouldn't be what it is today," Sheryl said, noting that the creation of the Orlando Senior Help Desk in 2012 provided an added service from the Pavilion, offering a valuable resource and referral service for seniors and their families.

Sheryl explained that with Nancy at the helm, she was able to step away from day to day operations. She shared, "The biggest indication of the success of an organization, is the ability for it to stand on its own," and likened the Pavilion to the raising of a child who was ready to take the next step away from its parents. She stated, "I wouldn't have stopped being hands-on if it wasn't taking off on its own. It has become something in the community that people appreciate."

Sheryl takes pride in the fact that the Pavilion helps bridge the gap with nursing home and assisted-living residents and their families. She stated, "Someone is coming in to enrich their relatives lives, enriching their lives whoever they are and whatever they do," noting that the Pavilion welcomes residents of all faiths to their celebrations and programming.

"Claire and I walk into the community luncheon each year and we always look at each other and think aloud, 'this is unbelievable.' We are thrilled by the number of people who were there, and care about the work they do to enrich the lives of seniors," Sheryl said, adding, "It's great to have a passion that you can pass on. You can't pass on an institution, but you can pass on a love and respect for seniors."

"Join the Meitin family and tee up for a fantastic day of golf in support of the Jewish Pavilion's Orlando Senior Help Desk, a free service that assists the elderly and their families on all matters related to aging. With your support, our senior specialist, Emily Newman, can help the elder community avoid the 'hazards' along the daunting senior maze," stated Ludin.