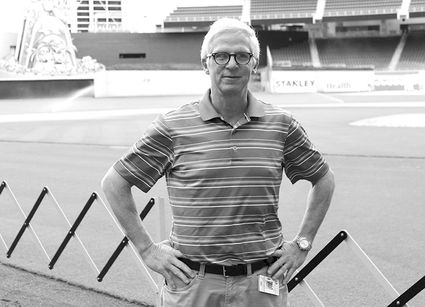 Joel Mael, seen at Marlins Park in Miami, sees long-term success for his club with its new money philosophy.

MIAMI (JTA)-For Joel Mael, the Shabbat-observing vice chairman of the Miami Marlins, the team's free spending in the offseason was wise from a financial perspective.

Signing Giancarlo Stanton, 25, to a record 13-year, $325 million contract and fellow outfielder Christian Yelich, 23, to a seven-year, nearly $50 million deal were parts of a plan to retain the club's budding talent and vault the club into playoff contention while saving money down the line.

But this was the Marlins, who had a track record of dumping high-salaried players or those about to reap riches. The Stanton contract stunned the Major League Baseball community.

"We assembled a group that we think has real all-star talent on it, and the way salaries have been going and the way the market has been going, some of these numbers will get even higher as you go down the road," Mael said during an offseason interview in the spacious office he shares at Marlins Park with team president David Samson. "We're willing to take the risk of buying them out of a couple of years of free agency and their arbitration years."

Mael, 57, is neither a lifer in the game nor a raw finance-industry professional recruited for the sport's analytics revolution. He brings a Wall Street sensibility as a partner in two investment companies and a career in the junk bond business. The Marlins' new philosophy involved input throughout the franchise, he said, "primarily the baseball department."

Mael spoke while visiting Miami, which he gets to twice monthly, staying in hotels, which he prefers to having a second home here. He lives with his family in suburban New York City and serves as deputy mayor of Lawrence, a neighborhood on Long Island in the heavily Jewish cluster known as the Five Towns. Mael is an active member of the Young Israel of Lawrence synagogue, and his four children graduated from a local Jewish school.

Shabbat observance kept Mael from attending the 2009 groundbreaking for Marlins Park and from watching key games on television over the years. Nor will he walk to games, at home or on the road, from nearby hotels-doing so "is not in the spirit" of Shabbat, he said.

"Since I've been [Shabbat observant] my whole life, I don't find it a challenge at all," the Boston-raised Mael said. "It's a red line I don't cross."

Last summer, his passion for bicycle riding-Mael estimates logging 3,000 miles in 2014-included a 185-mile overnight trek from New Jersey to the Pennsylvania camp of Chai Lifeline, a Jewish organization that assists seriously ill children. He raised $41,888 in the charity ride in which more than 300 bicyclists participated. That effort-his daughter had worked at the camp-and the Marlins' charitable efforts, Mael said, are "something we need to do" as Jews and as involved citizens.

"He's a solid community guy, with a good reputation-and he has a World Series ring and I don't," remarked Stuart Mehl, a neighbor who rides occasionally with Mael.

On this day, Mael wasn't wearing that Marlins' 2003 World Series championship ring, earned soon after Jeffrey Loria bought the team and brought Mael with him from Montreal, whose Expos Loria had owned. But Mael enjoyed discussing his team's quest for additional jewelry.

With Fernandez, the National League's 2013 Rookie of the Year who made just eight starts in 2014 before suffering an elbow injury requiring Tommy John surgery that will sideline him into this season, "what you're risking ... you're making up with the [character] of this kid," said Mael, speaking admiringly of Fernandez's escape from his native Cuba.

"The kid is just a very, very special person," he remarked.

As to locking up Stanton, runner-up in the N.L.'s 2014 Most Valuable Player Award voting, Mael said, "We needed to gain credibility back in the market. He is going to be the main piece we are putting into place, and then we're going to sign around him."

Following the Marlins' championships in 1997 and 2003, though, the organization unloaded their best, high-salaried players.

Fans were miffed, and the lower attendance accentuated a self-fulfilling prophecy of Florida not being a baseball region. Then, within months of its 2012 move to the new, publicly funded Marlins Park, Miami did it again, jettisoning stars like shortstop Jose Reyes and starting pitcher Mark Buehrle.

But youngsters like Hechavarria, obtained from Toronto in the Reyes-Buehrle trade, have returned the team to respectability. Despite opening this season with two losses-the opener attracted a sellout crowd, and that was followed the next night by a Passover at the Park promotion featuring a pregame performance by the Maccabeats a cappella band-the Marlins now appear ready to contend. Last year they finished second in the N.L. East with a 77-85 record, 15 wins more than in 2013.

"They potentially have one of the best teams in the National League," Antonen said. "I think there should be renewed excitement in southern Florida because it's fun to watch a young team grow."

The off-season moves were "a financial decision as [much as] a credibility decision," he said, adding that signing up-and-comers to long-term deals carries risk, but could be "much more economic" over time.

With that, Mael led a visitor downstairs. The late-afternoon sun shone through an open roof and onto grass being irrigated by sprinklers. Mael lifted the cover of an enormous tank near home plate and peeked at the swimming fish.

He ducked into the dugout, strolled past an indoor batting cage and arrived in the Marlins' clubhouse. Mael turned on the lights, darkness giving way to empty lockers whose occupants could soon fill the room with more victory cheers than the Marlins have recently known.