The March of the Living from Auschwitz to Birkenau 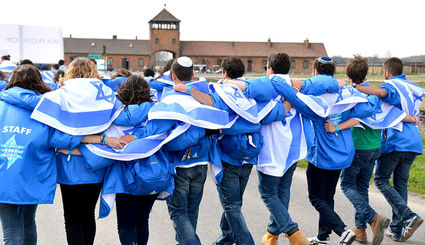 Yossi Zeliger/March of the Living

Teens at the March of the Living.

Thousands of people walked from the Auschwitz to Birkenau in Poland on Thursday, April 16, as part of the annual March of the Living on Holocaust Remembrance Day.

Each year, marchers commemorate more than a million people-the vast majority of them Jewish men, women, and children-who were murdered in the death camp.

This year, the program included some 10,000 students and adults, Jews and non-Jews, from more than 40 countries.

"On this march we insist that never again shall we be silent when innocent people are being slaughtered," said Dr. Shmuel Rosenman, who has served as chairman for the March of the Living since 1988. "Whether they are our brothers and sisters, or members of any other nation, race or religion, never again shall we [be] indifferent to the suffering others. Never again shall we be 'too late' in hearing the cry of the downtrodden. And yet we look around the world today and see that our work is not yet done."

Rosenman said he considers the march and its surrounding events an international educational program, bringing young people and adults from all over the world together to learn about the history of the Holocaust and Jewish life in Poland.

"The participants take the actual steps of the march of death," explained Rosenman. "The actual route which countless numbers of Nazi victims were forced to take on their way to the gas chambers or other concentration camps. This time, however, there's a difference. It's the march of the living-during which participants will affirm that intolerance no longer has a place in our world."