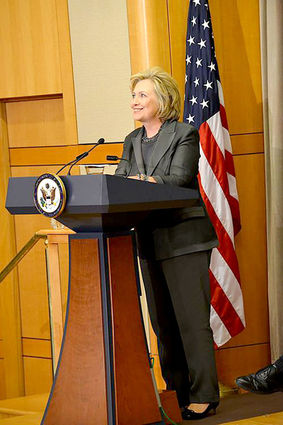 (JNS.org) Former U.S. senator, secretary of state, and first lady Hillary Clinton on Sunday announced that she will run for president in 2016. She lost to President Barack Obama in the 2008 Democratic presidential primary.

The National Jewish Democratic Council (NJDC) welcomed Clinton's candidacy, saying in a statement that she "not only has been a true and valuable friend to Israel over her long and illustrious career, but also has consistently defended the most vulnerable among us."

"She stands with the American Jewish community on creating a better path forward for all Americans, protecting civil rights, ensuring marriage equality, and defending the safety and security of the country and all our worldwide allies," NJDC said.

Clinton has also had notable episodes of tension with Israel. In March 2010, as secretary of state, she devoted a 45-minute phone conversation with Israeli Prime Minister Benjamin Netanyahu to rebuking him for a decision to move ahead with 1,600 new housing units in eastern Jerusalem. But last year, Clinton wrote in her new memoir, "In retrospect, our early, hard line on settlements didn't work"-drawing accusations that she was attempting to re-write her history on the issue.

"Clinton today is attempting to recast herself as a more sensitive and evenhanded figure on these matters," Noah Pollak, executive director of the Emergency Committee for Israel, wrote for the Weekly Standard at the time. "She would have us believe that her role in the [Obama] administration's campaign of criticism, pressure, and crisis-creation against Israel was one of reluctant participant... It is very difficult, looking at her record during this period, to conclude that the presentation of her role in her book is accurate."