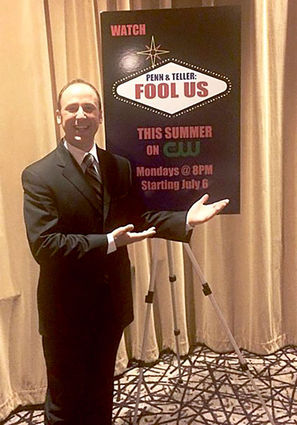 Kostya Kimlat on stage performing his magic act to try and fool Penn & Teller on their TV show, 'Fool Us.'

"Fool Us" is a magic competition in which magicians perform tricks in front of American magician-comedian duo Penn & Teller. If Penn & Teller cannot explain how a trick was done, the magician or magicians who performed it win a five-star trip to Las Vegas to perform as the opening act in Penn & Teller's world-famous show at the Rio Hotel & Casino.

Kimlat, the son of Ukrainian immigrants, recently proposed to The Roth Family JCC's marketing director, Amy Schwartz, during one of his performances. The surprised Schwartz, of course, said yes.