Catch 'Fiddler' before it ends 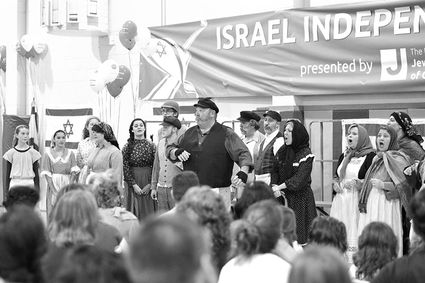 The cast of 'Fiddler on the Roof' gave a brief preview of their performance at the Israeli Independence Day celebration at the JCC.

It's so nice to have live performances at the JCC again. Theater at the J has brought a talented cast together to bring its audiences a familiar rendition of "Fiddler on the Roof" and it was a pleasurable experience (not to mention the very comfortable seats).

Tom Limbacher captured Tevye's optimistic spirit and his blues eyes reflected surprise, fear, happiness and sadness as he struggled with letting go of long-held traditions to see his daughters' happy in unarranged marriages.

Corina Witkowski's (Hodel) voice was breathtakingly beautiful as she sang "Matchmaker, Matchmaker" with her sisters, played by Lyla Halikman and Nacia Goldberg (daughter of Peri Goldberg who played Golde impeccably); the Russian dancing by Donald Johnston, Jr. and Paul Casteel was amazing (the audience gave loud applause); Kelly Roth gave just the right amount of shtick to Yente, the matchmaker, as her real-life husband, Joshua Roth, fiddled away as the fiddler; the choreography throughout the production flowed; and with the exception of Motel, the taylor, muddling words (he forgot some of the words in "Miracle of Miracles" and some of his lines), the production was flawless.