Why Israeli couples have surrogate pregnancies in Nepal 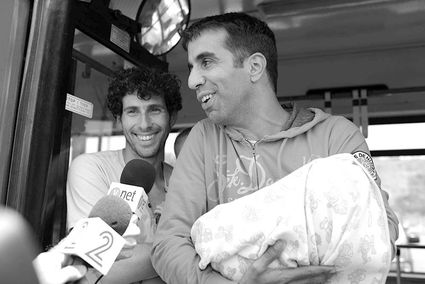 The parent of a baby born to a surrogate mother in Nepal holding the child at the Sde Dov Airport in Tel Aviv upon returning to Israel on a Magen David Adom aircraft from the south Asian country following its devastating earthquake, April 27, 2015. Israel began evacuating the infants on the return flights of aircrafts sent to provide quake relief.

Hundreds of Israeli couples choose surrogate pregnancy-where a couple's embryo is implanted in another woman, who carries the pregnancy to term.

Here's why Israelis opt for surrogate pregnancies, and why so many choose surrogate mothers in places like Nepal.

Why do Israelis choose surrogacy? Doesn't Israel have pro-natal policies?

Israel encourages couples to have children in a variety of ways. Aside from maternity leave policies that are far more generous than in the United States, the state heavily subsidizes in-vitro fertilization for women who experience difficulty conceiving naturally and preimplantation genetic diagnosis for those who qualify. Since 1996, surrogacy also has been legal in Israel.

Israelis typically choose surrogacy because they cannot carry a baby themselves-either because pregnancy would pose a significant health risk to the mother or if the couple cannot carry a fetus (for example, in the case of male same-sex couples).

"People don't choose this saying 'How fun, I won't have to be pregnant,'" said Mina Ulzary, co-founder of the Center for Surrogacy-Israel. "They choose it after difficult vacillations, both emotional and medical."

How does surrogacy work in Israel?

Heterosexual Israeli parents who choose surrogate pregnancy either can find an Israeli woman to act as a surrogate or a woman from overseas. Although a bill to allow same-sex couples to have surrogate pregnancies in Israel passed an initial vote in the Knesset last year, it has yet to become law. For now, same-sex Israeli couples must go abroad for surrogacy and are allowed to bring the child back to Israel.

About 270 Israelis choose to have surrogate pregnancies every year, according to Ulzary. Approximately two-thirds of them choose foreign surrogates because the process is cheaper and surrogate mothers are easier to find. Georgia and India are among the more popular countries. Surrogacy in Israel costs approximately $64,000; surrogacy abroad can cost as low as $33,000. Most surrogacy implantations succeed in bringing the babies to term. When they don't, couples do not pay the full fee.

Merav Levy, director of Israeli Surrogate Motherhood, which encourages surrogacy within Israel, says the Israeli process is safer and more convenient for a couple than traveling to a place like India to retrieve their baby. To bring a baby to Israel from abroad, a mother and father must prove their DNA matches the baby's and endure a bureaucratic process that can keep them from returning home for up to three weeks after the birth.

Why do some Israelis choose surrogacy in Nepal?

Though the quality of health care in Nepal is seen as second rate, at best, Nepali surrogacy has become a popular choice for Israeli same-sex couples who are barred by local laws from surrogacy in countries with better medical care like India, Georgia and Thailand, Ulzary says. Israeli couples began having surrogate pregnancies in Nepal in 2012, according to Ulzary, who estimates that some 100 couples find surrogate mothers there every year.

What does Jewish law say about surrogacy?

Halachah, or Jewish law, allows surrogacy, and a rabbi is part of the Israeli Health Ministry committee that approves women for surrogate pregnancies. Babies born of surrogacy abroad must undergo a brief conversion process upon arriving in Israel, including immersion in a mikvah, according to Ulzary.

Heritage Associate Editor Kim Fischer asked Rabbi David Kay of Congregation Ohev Shalom a similar question. "If a baby is born from a non-Jewish surrogate is the baby Jewish?

Rabbi Kay's response: "In vitro fertilization, surrogacy, and foreign adoptions have raised this and similar regularly. The rule of thumb is: 'It's the oven, not the bun.' Thus, if the woman bearing the child is Jewish, the child is Jewish.

This leads to some results, which appear counter-intuitive at first. For example, in vitro fertilization using donor egg and sperm from Jewish couple but implanted in a non-Jewish woman (whether a surrogate or not) would produce a non-Jewish baby, according to halakhah. Likewise, IVF using donor egg and sperm from non-Jews but implanted on a Jewish woman would produce a Jewish baby, according to halakhah.

Nepalese surrogates would almost certainly not be Jewish. Therefore, children born to these women on behalf of Israeli couples would need to undergo conversion to be considered Jewish according to halakhah. Thankfully, this is an uncomplicated process for an infant. A male child would need to have circumcision l'sheim geirut ("for the purpose of conversion to Judaism"). Either a male or female infant would then need to be immersed once in a proper mikveh in the presence of a Beit Din."