WJC president warns history appears to be repeating itself 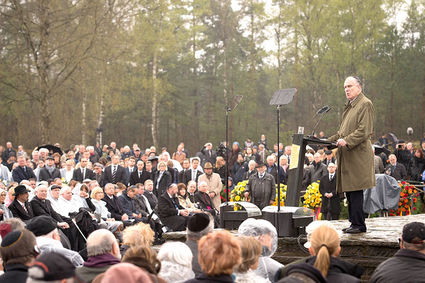 LOHHEIDE, Germany-In a keynote address at the 70th anniversary ceremony for the liberation of Bergen-Belsen, World Jewish Congress (WJC) President Ronald S. Lauder condemned world silence during the Holocaust and warned that history appears to be repeating itself.

"Seventy years ago, the world was silent and now we are standing on one of the largest Jewish cemeteries in the world," said Lauder. "We appear to be descending into the same hell today. Anti-Semitism is rising in Europe, neo-Nazi groups are sitting in Parliament in Hungary and Greece, and Iranian leaders repeatedly promise to wipe Israel from the pages of time. To shout against the past while remaining silent about the present is not just wrong; it is outrageous and immoral."

During World War II, the concentration camp at Bergen-Belsen became one of the most notorious Nazi camps where more than 50,000 people were murdered. The British 11th Armored Division liberated the camp in April 1945. A Displaced Persons camp, the largest in post-war Germany, was later established nearby. It was closed in September 1950. An estimated 2,000 children were born to Holocaust survivors at the Bergen-Belsen DP camp.

"From the ashes of this terrible place, the Jewish people rose up and moved on. Today there is a younger generation of Jews committed to making sure the Jewish people never fall victim to this kind of evil again. Just as you never let us down, we will not let you down," promised Lauder.