Dorms in the hills: Tirael Cohen leads a new kind of settlement movement 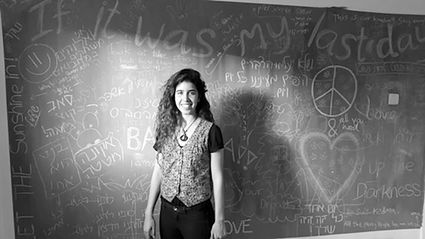 About three years ago, Tirael Cohen posted a flimsy, 8-by-10 inch flyer in the Ariel University halls seeking students to create a student village in Samaria. Within a few days, more than 150 students called expressing interest-and it was all she and her friends needed to get started.

Today, Cohen is the director of Kedma, a growing organization that runs student villages in Judea and Samaria. On May 19 in Jerusalem, she will accept the "Spirit of Zion" Moskowitz Prize for making her Zionist idea a reality.

At the tender age of 22, Cohen, a journalism student at Tel Aviv University, has developed a new model for Jewish settlement, although she doesn't see her organization as a "settlement movement," which has the reputation of being led by religious Zionist families. Cohen shuns labels. Wearing jeans and boots, she does not appear visibly Orthodox, although she observes Shabbat and kosher dietary laws. She grew up in the community of Nof Ayalon near Modi'in, beyond the Green Line (1949 armistice line), to a family of French immigrants-although her long, curly dark hair gives her the sabra touch.

"We're a very social project at its core," Cohen told JNS.org in the lounge at the student village in Ma'ale Efraim in the Jordan Valley, with her dog Nikki swirling around her. "Students got together not to create new settlements, but to reach the periphery where they have needs."

Ma'ale Efraim, for example, was founded with a vision of becoming the capital of the Jordan Valley, much in the same way Ariel has become the capital of Samaria-the hub of an area considered vital to Israel's security. But after a wave of violence consumed Israel during the second intifada in the early 2000s, the largely secular residents of Ma'ale Efraim started moving out, and educational and industrial facilities were left empty.

One such deserted facility was the Jordan Valley Field School, where Cohen and about 25 other students each live in a studio cottage. Neglect is still apparent in the garden weeds shooting out of the ground, a dining hall with shattered windows, and decrepit caravans filled with debris. Slowly, the students are reviving it-the student lounge is also their Shabbat dining hall.

Kedma operates about five student villages housing a total of 150 students. The others are located in Reches Itamar and Migdalim in Samaria; Rimonim in the Benjamin region; and Shima in the Hebron Hills. The local councils work with the young idealists to locate and re-outfit caravans or neglected structures for student living. Students pay about NIS 450 ($116) a month in rent and volunteer six hours a week in neighboring communities, where they tutor children, run cultural and social activities, and assist seniors.

"Imagine what it does to a yishuv (village) like Ma'ale Efraim. They come with a lot of fire, a lot of desire to do good, and they come and say, 'How can we help?'" said Cohen.

Today, about 400 families live in Ma'ale Efraim, including many new immigrants who have been identified by the state as social welfare cases. These regions generally fall off the radar of established charitable organizations, often due to their location beyond the Green Line.

The students come from diverse backgrounds-religious and secular-united by an alternate vision for student life, one that combines social action, community living, and a sense of mission.

"They look for something that could give them meaning, belonging, and to feel part of something bigger than themselves," Cohen said.

For Cohen, life on Ma'ale Efraim is idyllic. The open space, the view of the mountains and the Jordan River-and even the neglected buildings ripe with potential-fill her with inspiration and a fulfilling quality of life. She drives in her small jeep to class and to the occasional social event in Jerusalem, their closest "big city." But to the students, life begins on this isolated hill.

"We make parties, and people come here from Jerusalem," said Cohen. "The action is here."