How Jews are trying to make things better after Baltimore 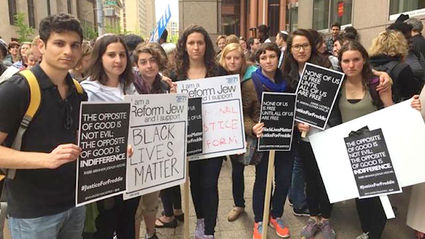 Religious Action Center of Reform Judaism legislative assistants at a rally May 1 in Baltimore.

WASHINGTON (JTA)-From roundtable discussions to protests and prayers to candid talk with law enforcement officials, American Jewish communities are joining in the debate about community policing in the wake of several high-profile deaths of unarmed black men while in police custody.

Officials were short on specifics, but several told JTA that protests in Baltimore following the death of Freddie Gray on April 19 have sparked a determination to confront the tensions between police and minority communities.

"At this critical time in our nation's history it is abundantly clear that a conversation not only needs to be had between law enforcement and disenfranchised communities-particularly the African American community, but within our own communities," JCPA President Rabbi Steve Gutow said in a statement.

In several communities, Jewish organizations with strong ties to both the African-American community and law enforcement see themselves as well positioned to help bridge differences.

In Baltimore, where violent protests led the mayor to impose a curfew on the city for several days following Gray's death, the local chapter of Jews United for Justice appealed to its members in the legal profession to volunteer "as a legal observer, jail care, or hotline volunteer" during the protests.

In Detroit, the Michigan Round Table, an umbrella body for minorities in which local Jewish groups take part, called an emergency meeting following the Baltimore protests. Heidi Budaj, the regional director of the Anti-Defamation League, said the meeting was mainly an opportunity to share reactions to what was unfolding in the Maryland city.

"These incidents are bringing to the forefront in our discussions feelings that may have been hidden for many, many years," Budaj said. "All of us want to resolve any issues before it turns into Ferguson or Baltimore."

Through its various law enforcement training programs addressing bias and hate crimes, among other topics, the ADL has long forged close relations with local police departments. At its national conference here over the weekend, the ADL featured a session about police-community relations and the organization's role in improving them.

In Detroit, Budaj said the Jewish community is also part of a coalition, Advocates and Leaders for Police and Community Trust, that has held monthly meetings with area police about police brutality and other "touchy issues." The group rallied members, including 14 rabbis from Baltimore and Washington, to join in protests in Baltimore on May 1.

In Ferguson, a city near St. Louis, protests following the shooting last summer of Michael Brown by a local police officer were a major catalyst for a renewed national debate about police relations with the African-American community.

"What we're focusing on is healing what's broken and building a St. Louis that is safe, equal and just for all," said Batya Abramson-Goldstein, the executive director of the Jewish Community Relations Council in St. Louis, which helps organize an annual 9/11 commemorative concert that last year made reconciliation its focus.

"To suggest we need police looking like they did in Ferguson, it's outrageous," Gutow said. "When you see the blue uniform of police it should be a sign of friendship."

The expanded availability of military-grade hardware to local police departments coincided with a growing concern about counterterrorism following the attacks of Sept. 11, 2001. John Cohen, who until last year was a senior counterterrorism official at the U.S. Department of Homeland Security, said the war footing adopted by police departments after the attacks put community policing on the back burner.

After race riots in the early 1990s, "there really was a broad and energized movement within the policing discipline to expand local community cooperation focused on preventing crime, improving life," said Cohen, now a professor at Rutgers University's School of Criminal Justice in New Jersey who is helping to direct a project examining attacks on faith communities. But after 9/11, he said, "there was a shift in priorities."

Jewish groups "benefited greatly" from the shift, according to Paul Goldenberg, the director of the Secure Community Network, the security arm of the national Jewish community. Concerned that Jewish institutions were prime targets for terrorism, Jewish groups won significant grant money from the Department of Homeland Security-including 97 percent of all funds doled out in 2012 under the department's Non-Profit Security Grant Program, according to a report that year in the Forward.

Goldenberg praised law enforcement agencies for the "extraordinary amount of time" spent assisting Jewish communities. A degree of militarization was inevitable, he said, to face terrorists at home and abroad.

"Police officers a decade ago were carrying 357s with six shots and rounds on heir belts, and they found themselves being confronted by adversaries with automatic weapons," Goldenberg said. "The paradigm has changed."