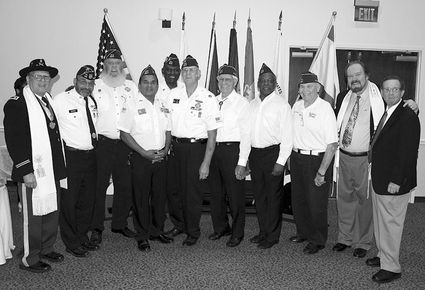 To help kick off the Memorial Day Weekend, on May 22 Temple L'Chayim of Clermont will be hosting a special Community Memorial Service to honor and memorialize the soldiers, families and victims of the national and international war efforts by all American Veterans. All veterans of foreign wars are invited with their families as well as all city dignitaries, no matter what your belief or religion for this Clermont community to join together in this special Memorial Day / Weekend tribute. It will be held at the Clermont City Center, 620 West Montrose Street in Clermont, Florida 34711 starting at 7:15 p.m. to 9 p.m. This event will be free and open to the public. Refreshments will be served.

Cantor Isaac Kriger and Rabbi Howard Schwartz of Temple L'Chayim will lead the memorial service with special readings, prayers, poems and commentary stories. There will be a presentation of songs and music. Cantor Kriger noted, "It is important for us to join together with our entire community, so that no one will forget what happened in our history from the valiant efforts of all our American war veterans."

Internationally respected opera stars and local Orlando area entertainers from Kriger Entertainment Productions; Cantor Isaac Kriger and Elizabeth Brahm-Kriger will lead the attendees with a series of songs including the God Bless America, The Star Spangled Banner, What America Means To Me, and other popular melodies. They will also share songs honoring the American Army, Navy, Marines and Air Force. Rabbi Schwartz served as a Jewish chaplain in the U.S. Army from June 1984 through March 2000, retiring as a major.

Chris Singh, Marine Corps veteran and commander of the Clermont V.F.W. Post 5277 added that they will proudly be there to help support these Memorial Day ceremonies. Vice Commander Alva Ashline of the Clermont American Legion Post will be there with a contingency of dressed soldiers. There will be a very special Color Guard Flag Ceremony with plenty of extra Clermont City, County, State, V.F.W. Post and American flags that will proudly help make this exciting event heartwarming for all who plan to attend. One surviving World War II veteran, one Korean War veteran, possibly one former Vietnam P.O.W. as well as others will be there from other American military war efforts and deployments .The participating V.F.W. and American Legion Posts will be inviting all of their members from other affiliated Clermont area war veteran organizations. For more information, visit the local Clermont V.F.W. Post at 855 West Desoto Street, Clermont, FL 34711, call 352-638-1180 or visit http://www.Post5277ClermontVFW.org.

"We remain very proud that our Temple L'Chayim congregation will host our local area Veterans of Foreign Wars and our entire community as a cornerstone to worship together in honor of all surviving war veterans, the war dead and all those celebrating Memorial Day / Weekend with military honors," said, Nathan Axel.