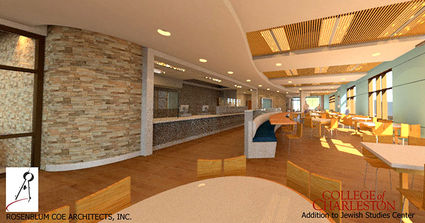 An architectural rendering of the College of Charleston's new dining hall, which is scheduled to open in December.

CHARLESTON, S.C. (JTA)-Renowned for its gracious architecture and signature Southern charm, Charleston is increasingly celebrated as a foodie heaven.

The trouble is, in a city whose culinary specialties embrace (and glorify) oysters, she-crab soup, and shrimp and grits, the burgeoning restaurant scene is nearly off limits to those who keep kosher.

But things are set to improve for the kosher-observant later this year, when the College of Charleston opens a $1 million kosher vegetarian dining hall in a new wing of its Sylvia Vlosky Yaschik Jewish Studies Center, home to the Yaschik/Arnold Jewish Studies Program.

The dining hall, funded by several private donors, is an integral part of the college's comprehensive $10 million fundraising campaign for the Jewish studies program. The three-story brick wing will double the size of the Jewish studies center, which is in the city's historic peninsula district. The dining hall, set to begin operations around Hanukkah, will occupy the ground floor, with an open-plan design featuring curved ceiling details, cool pastel colors, an entry wall of Jerusalem stone and seating options for up to 75 people.

Open for breakfast, lunch and dinner, the dining hall will be run by the college's dining services and cater to students on the school's dining plans. But it will also be open to the public for a la carte meals, with an eclectic menu using organic and local ingredients. One of the aims, according to the dining hall's vision statement, will be to attract "an eager and emergent audience of student and community members by sourcing ethical, sustainable and local food in an energized, hip facility that will utilize recycled and local materials."

All the food will be kosher and vegetarian, and some will be vegan (containing no eggs or dairy). Mark Swick, the Jewish studies program's community liaison, said the food will be certified by Charleston's Kosher Commission, which is comprised of local Orthodox rabbis.

Some 800 Jewish students attend the 12,000-student school, and the college is using the new dining facility as a recruiting tool to attract more.

"A lot of students are looking for kosher possibilities," Jewish student recruitment counselor Helen Slucki said. "For some it is a need – they keep kosher and couldn't come here without it. But for a lot of them it is a symbol. They don't keep kosher, but like the Jewish studies program, it is a symbol that the college is welcoming to Jews."

Dara Rosenblatt, the college's Jewish student life program coordinator, said the new dining hall is "already making waves" among students. Buzz has also begun to build outside the college-Charleston's City Paper placed the dining hall on its list of 20 new eateries set to open in town this year.

But Paige Lincenberg, a Jewish studies major from Atlanta, said she wasn't sure yet what impact the new facility would have on her eating experience. She already eats "kosher style," separating meat and dairy and avoiding pork and shellfish.

For the strictly kosher observant, she said,  finding kosher meat tends to be more of a challenge than finding vegetarian food.

"It's possible to buy vegetables and cook them," she said.

Jewish history in Charleston dates back more than 300 years, and the city, which in 1800 had more Jewish residents than New York, was a cradle of Reform Judaism in the United States. Charleston's first organized congregation, Kahal Kadosh Beth Elohim, was founded in 1749, and its current synagogue, a graceful Greek revival building dedicated in 1841, is the second-oldest synagogue building in the United States. Today, approximately 6,500 Jews live in the Charleston area.

The college's Jewish studies program, established in 1984, offers majors and minors in Jewish studies, but outreach to the Jewish community at large is also a priority. The program hosts numerous events open to both students and the public, including film screenings and lectures. Many local senior citizens audit academic courses.

Swick said that in designing the new dining facility, "We paid close attention to what other colleges across the country have done in offering kosher and vegetarian options." (It is not known how many Charleston students are vegetarians, but the school hosts a vegan student group.) A model, Swick said, is Grins Vegetarian Cafe at Vanderbilt University in Nashville, Tennessee. Opened more than a decade ago in the Shulman Center for Jewish Life, Grins offers kosher vegetarian meals both on student dining plans and to the community at large, and is consistently ranked as one of Nashville's top vegetarian restaurants.

The intention in Charleston, according to the dining hall's vision statement, is to "help create an environment in which diversity is represented, not only by appealing to the observant Jewish (Muslim and Hindu) students, but reaching out to a constituency that sees eating choices as a manifestation of deeply held ethical and environmental values."

Ghazi Abuhakema, director of the Asian studies and Arabic programs at the college, said the dining hall, which would meet the standards of most halal-observant Muslims, is "a very good project," and that the local Muslim community is likely to patronize the facility if it is advertised "properly and adequately."

The new dining hall will be named in honor of philosophy professor Martin Perlmutter, who has been director of the Jewish studies department since 1991 and who helped develop the idea for the dining hall. His championing the dining hall as a way to promote ethical eating and "coming together through food" led the city's Charlie Magazine to name Perlmutter last year one of Charleston's "50 most progressive people."

"A vegan diet is a statement about values and lifestyle, whether it is because of concern for the environment, interest in one's health or caring about the well-being of animals," Perlmutter said. "So, too, keeping kosher or observing halal requirements is a commitment to traditions of religion and culture. Representing that diversity in a vegan/vegetarian kosher/halal dining hall is a physical way for the College of Charleston to become more diverse and progressive."