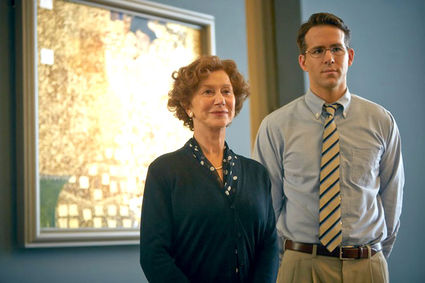 Actress Helen Mirren, as Maria Altmann, with co-star Ryan Reynolds, who portrayed Attorney Randol Schoenberg, standing in front of the famous 'Portrait of Adele Bloch-Bauer I.'

NEW YORK-The World Jewish Congress (WJC) and The Weinstein Company announced today that Academy Award® winner Helen Mirren will receive the WJC Recognition Award for her role in the acclaimed film 'Woman in Gold' and for helping to educate the public about the issues of Nazi-looted art.

WJC President Ronald S. Lauder will present Mirren with the inaugural award at a special event in New York later this year at a date to be determined. Mirren will be honored for her portrayal of Maria Altmann, an Austrian-American woman who made headlines in 2006 by winning her legal battle against the Austrian government to reclaim five Gustav Klimt paintings, among them the famous 'Portrait of Adele Bloch-Bauer I', nicknamed 'Woman in Gold.'

In 1938, the painting was among the works forced from their rightful owner, Adele's widower Ferdinand, because he was Jewish. Following its restitution to Maria Altmann in 2006, it was acquired by Ronald Lauder and is now on display at the Neue Galerie in Manhattan.

"Being a part of this film and preserving Maria Altmann's legacy has been a truly exceptional experience from the start," said Mirren. "I am utterly moved to be receiving an award from the World Jewish Congress, an organization that does such important work all over the globe in advocating for Jewish rights."

"The history of the 'Woman in Gold' painting exemplifies the immense suffering, painful loss and, for a prolonged period, the injustice that many Jews were subjected to during the 20th century," Lauder declared. "With the opening of this new movie, audiences can learn about the second half of the Nazi-looted art story: the postwar art grab by governments and museums that willfully continued the Nazi theft, both by hiding the art from the rightful owners or their heirs and by fighting the victims in court to keep the artworks.

"Thanks to Helen Mirren's stunning performance, the international public will learn about this legacy of World War II which still hasn't been addressed properly by many governments and museums."

The WJC, which represents Jewish communities in 100 countries around the world, has played a pivotal role for decades advocating for Holocaust-era restitution around the world and led the efforts for the return of Nazi-looted art.