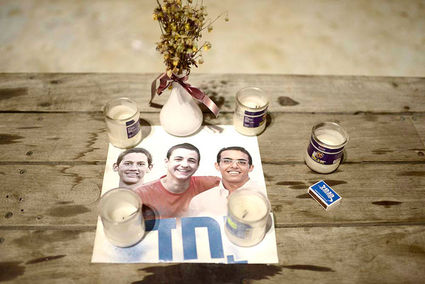 Israelis lit candles in Tel Aviv's Rabin Square on July 6, 2014 to mourn the death of three teenagers who were abducted and murdered in the West Bank.

This piece was written by Iris and Ori Ifrach, Rachelli and Avi Fraenkel, and Bat-Galim and Ofer Shaer, the parents of Eyal Ifrach, Gil-ad Shaer and Naftali Fraenkel.

(JTA)-One year ago, our families were thrust into a nightmare beyond anything we could have ever imagined.

Our sons, Eyal Ifrach, Gil-ad Shaer and Naftali Fraenkel, had been kidnapped while making their way home from school. For 18 (chai) days, we hovered somewhere between despair and hope while we prayed for their safe return home.

Tragically, that safe return would not come to be. Our boys joined the thousands before them who lost their lives as Jews and in the name of our ancient homeland.

During that period of uncertainty we all shared an intense sense of unity unlike anything our people had experienced in recent years with the message of "Bring Back Our Boys" reaching people from so many different backgrounds and places. The feeling of togetherness, of belonging and caring for one another only increased in its fervor during the funerals and the shiva. And today we are incredibly inspired by the actions people have taken to continue this spirit in memory of our boys.

During the shiva, our homes overflowed with visitors seeking to offer us comfort, and so many conversations stood out.

But in one interaction with Jerusalem Mayor Nir Barkat, who made his way to each of our homes, a seed of an idea was hatched that we knew needed to be developed. He said that we needed to find a way to harness that spirit of unity and keep it alive because this would serve as the ultimate legacy for our sons.

And so the idea of the Jerusalem Unity Prize was conceived.

With Barkat and a professional team of organizers in place, we formed a not-for-profit organization named the Memorial Foundation for the Three Boys intended to highlight and promote the concept of Jewish unity that defined that period. Since announcing the establishment of the prize in January, we have received more than 200 applications. On June 3, three prizes for unity were presented in an historic ceremony hosted by Israel's President Reuven Rivlin. The award winners from Israel and the Diaspora were chosen for best reflecting those ideals of bringing Jews of different backgrounds and perspectives together for the common purpose of building a stronger Jewish community.

But we also began to appreciate that as powerful as the message of the prize might be, this concept deserved to be shared with the entire world. With that broader vision, we embarked on the concept of Unity Day. June 3, 2015, the one-year anniversary of the kidnappings, served as the first-ever Unity Day where Jewish communities all over the globe stop and consider the value of unity and how to work even harder to bridge the obvious divides that exist within our society.

There is no doubt that those divisions waned during those terrible days a year ago. But tragedy cannot be the primary catalyst for unity. Rather, it is incumbent upon us to harness the lessons of that time to build a better society.

During the course of the year, we have all had our own personal moments to reflect on where these events will take us in the future. Indeed, we all have our personal answers and know that the road ahead will not always be easy. But we also know that this path will not be taken alone. Through the power of the memories of Eyal, Gil-ad and Naftali, not only will their deaths have brought us together but their memories will as well.

In that spirit, it is our eternal joint prayer that they be remembered not simply as victims of a brutal tragedy but also as three "normal" boys who succeeded in bringing a nation together. May the memories of Eyal, Gil-ad and Naftali inspire us all to really live as one people with one heart.

To find out more about Unity Day and to get involved visit www.unityprize.org