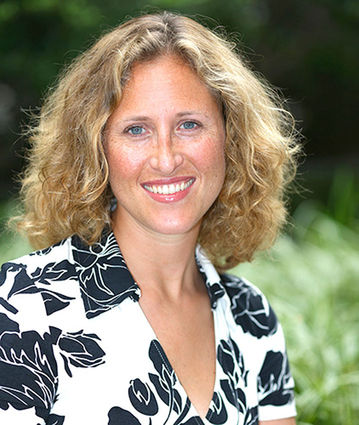 Rochelle Shoretz was the founder and executive director of Sharsheret.

NEW YORK (JTA)-Rochelle Shoretz was fond of saying, "There are no problems, only solutions."

Her approach to life was not to dwell on bad news, but to channel the energy that friends described as boundless into somehow making things better. It's what drove her to establish the national cancer organization Sharsheret after she was first diagnosed with breast cancer at age 28.

On Sunday, Shoretz died of complications from the disease at her home in Teaneck, New Jersey. She was 42.

At the time of her initial diagnosis, she was an attorney and the mother of two young boys. While others might have been compelled to save their strength, Rochie, as friends and family called her, shared hers. She launched Sharsheret in 2001 while she was still undergoing chemotherapy.

"When I was diagnosed, there were a lot of offers to help with meals and transport my kids, but I really wanted to speak to another young mom who was going to have to explain to her kids that she was going to lose her hair to chemo," Shoretz told JTA in 2003, describing Sharsheret's origins.

The Teaneck-based nonprofit provides educational and support services to young Jewish women living with breast cancer and ovarian cancer-or are at heightened risks for those diseases, as many Jews of Ashkenazi descent are. One in 40 Ashkenazi Jews, both men and women, carry genetic mutations that increase the risk of breast and ovarian cancer.

Shoretz beat cancer the first time around, but by 2009 the disease had returned and spread. Still, she pressed forward in her work and in her personal endeavors, participating in triathlons and half-marathons, even climbing Machu Picchu in Peru.

"They often say when you lose one of five senses, your others are enhanced," Shoretz told The New York Jewish Week in 2010. "I wonder if life feels so much more powerful and vibrant because I lost some of my health."

She was a doer, her colleagues said, realizing-especially after her cancer came back-that she had no time to waste.

"But at the same time, she would emphasize the need to literally block out time to think, to make sure what we are doing is right and everyone who connected to Sharsheret is important, is a link in the chain," said Elana Silber, Sharsheret's director of operations, eulogizing Shoretz at her funeral on Monday.

Sharsheret means "chain" in Hebrew. Shoretz was an Orthodox Jew.

Today, the organization Shoretz founded runs programs nationwide and has an annual budget of about $2.25 million, 16 staff members, and offices in Teaneck and Hollywood, Florida. Sharsheret receives support from individual donors, family foundations and the pharmaceutical industry, and was recently awarded a $1.8 million grant from the Centers for Disease Control to increase access to its programming.

Sharsheret maintains a peer network of 4,200 comprising Jewish women across the denominational spectrum; runs a genetics hotline for individuals and families to discuss their cancer risk; hosts webinars on topics ranging from clinical trials to managing relationships as a cancer survivor; and has programs for different cohorts, including parents of young children and women living with advanced metastatic breast cancer or recurrent ovarian cancer.

Silber said Sharsheret will continue the work that was so important to its founder.

"Rochelle was superhuman in so many ways-brilliant, visionary, motivating, passionate and compassionate," Silber told JTA. "She was a hero for women and families, and everyone who came in touch with Rochie came in touch with the human side of her as well."

Shoretz always had just the right words to express her gratitude, those who knew her said, and was able to find humor in even the darkest places. As a close friend, Deborah Leipzig said, "We talked a lot about cancer, a lot about loss, and we laughed the entire time we were together."

Born on July 27, 1972, Shoretz grew up in Brooklyn. She graduated from Barnard College and Columbia Law School, and in 1999 served as a clerk for U.S. Supreme Court Justice Ruth Bader Ginsburg. She received a Joshua Venture Group fellowship for Jewish social entrepreneurs and served on the organization's board. She also held a seat on the Federal Advisory Committee on Breast Cancer in Young Women.

Shoretz, who was divorced, is survived by teenage sons Shlomo and Dovid Mirsky; her mother, Sherry Tenenbaum; her father, Morris Shoretz; five sisters and two brothers. She was a stepdaughter of Jeffrey Tenenbaum and Carol Ann Finkelstein.