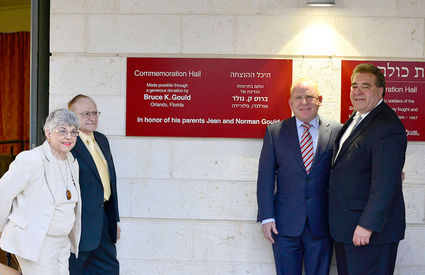 The battle for control of Ammunition Hill was one of the most decisive of the Six-Day War. After fierce and bloody fighting against Jordanian forces in the early morning hours of June 6, 1967, Israeli victory there led directly to the capture of the Old City and the reunification of Jerusalem after almost 2,000 years.

A national memorial to the battle that took place there, Ammunition Hill is located in the present-day neighborhood of Ma'alot Dafna, just feet from the 1948 border with Jordan that for 19 years divided the capital city in two. While some 250,000 tourists visit it each year, the site-viewed by many as symbolic of the city's reunification-has been in need of renovation, its trenches, bunkers, and museum deteriorating over time.

Now, work has begun on a major project to address this oversight, with renovations expected to be completed by the 50th anniversary of the war in 2017. This past Jerusalem Day, May 17, a new memorial hall was unveiled as a first phase in this endeavor.

"The hall tells the stories of the 182 Israeli fighters who died in the battle for Jerusalem, 37 of whom lost their lives here on this hill," said Russell F. Robinson, CEO of Jewish National Fund (JNF) USA. The organization supports national memorial and heritage sites in Israel. "The hall tells their stories in a display that includes photographs and personal memorabilia in a context of life rather than death, men in street clothes rather than uniforms, so we get to know them as they were during their lives."

At a private dedication ceremony at the hall on a sunny, hot morning-and in advance of a Jerusalem Day ceremony there that evening featuring Prime Minister Benjamin Netanyahu-Alon Wald, son of Capt. Rami Wald who fell in the fight for Jerusalem, told the gathering that "the legacy of my father and his comrades-in-arms, the liberators of Jerusalem, is now more accessible and relevant than ever before, thanks to the opportunities that this complex enables."

According to Katri Maoz, Ammunition Hill director general, the project to renovate the site was a long time in coming because the surviving Israeli veterans who fought there, as well as the Israeli government, did not fully recognize the national significance of the site. "But once they came to realize that this place represents the values of the nation of Israel, the whole atmosphere changed and the process started," he said. 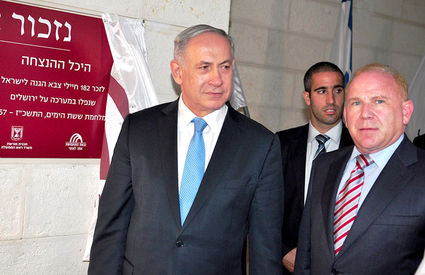 Prime Minister Benjamin Netanyahu and Bruce Gould stand beside the plaque that says in English, "Commemoration Hall, In honor of the 182 soldiers of the Six Day War who bravely fought and fell in the Battle for Jerusalem. 1967."

Slated as part of the renovations, a new museum will tell the story not only of Ammunition Hill, but of the entire Six-Day War, chronicling it day by day. "For 20 years, Jordanian soldiers have been coming here-first the actual combatants and now the second generation-to learn about what happened here. Every Jordanian military general who comes on an official visit to Israel comes here," which is why the museum will also include signage in Arabic, Maoz said.

Total renovations are expected to run around 20 million shekels, with JNF footing about 25 percent of the bill. Bruce K. Gould, of Orlando, Florida, and a member of the JNF national board, was the primary donor for both the new memorial hall and an amphitheatre that was built a few years ago.

"To me, Ammunition Hill symbolizes a 3,000-year struggle to make this city whole," Gould said. He first visited Israel in 1996 and "fell in love" with it then; he credits that experience with helping him understand what it means to be a Jew.

"It's very important and meaningful to show that we in the Diaspora support the State of Israel," said Gould, who dedicated the memorial hall in honor, and in the presence, of his parents, Norman and Jean. "I made this gift out of love and out of a feeling of responsibility and honor. To make sure that there will always be a homeland for the Jewish people."