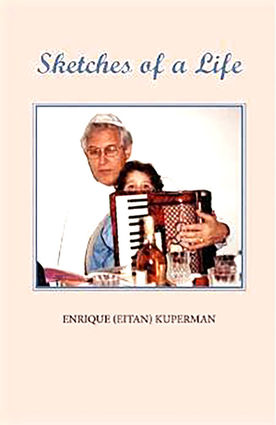 "Sketches of a Life"

Available now, directly from the author at EKuperman@aol.com.

Copies are also available in Spanish.

Written from the heart and experiences of Enrique Kuperman, "Sketches of a Life" weaves together a series of bold and powerful short stories told from a Jewish perspective. Covering family, community, conflict and the refuge of spirituality, Kuperman's work reminds readers of Judaism's innate harmony and ability to do well for the world at large.

"Sketches of a Life" (in Spanish "Pinceladas de un Vivir"), is an anthology of brief stories written by Eitan Kuperman. The son of Russian Jewish immigrants, Kuperman was born in Santiago, Chile in the middle of the Second World War. The title "Sketches of a Life" anticipates a mosaic of separate stories by time and geographic context, yet the tales intermingle and serve to unify Kuperman's message.

The family, community, and ethnic experiences-with their proper human conflicts-guide us to a final perspective in which Judaism is in harmony with social justice and tensions find refuge in the spirituality of the human being, which, though often hidden in diversity, is always at hand for the idealistic individual searching for truth and reconciliation and hoping to improve the world.

"Each story is a piece of my life's puzzle, written from the heart yet steeped with a wider message that can positively affect the entire world," explains the author. "Millions are searching for ways to find truth, reconciliation and use them to change the planet for the better. It is my hope that they'll find endless wisdom through my words."

Continuing, "It's rare to see a book like this coming from a strictly Jewish perspective; a belief system still very much misunderstood and skewed by popular culture. This is Judaism in its bare form, and I hope it changes the lives of readers everywhere."

A masterpiece that defined an era

"The Lady in Gold"

The story of Gustav Klimt's most famous painting: how it was created and celebrated, then seized by Nazis and ultimately restored to its rightful owner.

It would become Austria's "Mona Lisa"-Klimt's 1907 portrait of the dazzling Viennese socialite Adele Bloch-Bauer. Celebrated as a Seccessionist masterpiece it cemented a legacy and defined an era.

Confiscated by the Nazis and stripped of its identity, its Jewishness, and "correctively" renamed "Lady in Gold," the portrait gazed down upon the visitors of the Belevedere palace as fin de siècle Vienna's deposed and anonymous queen for decades until Maria Altmann, a determined Bloch-Bauer heir, instigated a revolutionary legal battle, which would come to include the Austrian government and the U.S. Supreme Court, that would finally decide the fate of one of the most beloved and highly-valued paintings in the world. 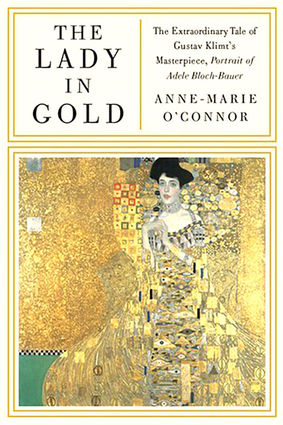 A riveting social history; a haunting portrait of a lost time and place; and an international drama of art and legacy, "The Lady in Gold" illuminates the lives of Bloch-Bauer and Klimt; Altmann and her attorney Randol Shoenberg; and the lustrous painting that defined them each while it transfixed the world.

Anne-Marie O'Connor attended Vassar College, studied painting at the San Francisco Art Institute, and graduated from the University of California, Berkeley. She was a staff writer for the Los Angeles Times for 12 years and has previously written on the Klimt painting and the family's efforts to recover the collection. She currently writes for The Washington Post from Jerusalem, where her husband, William Booth, is the bureau chief.