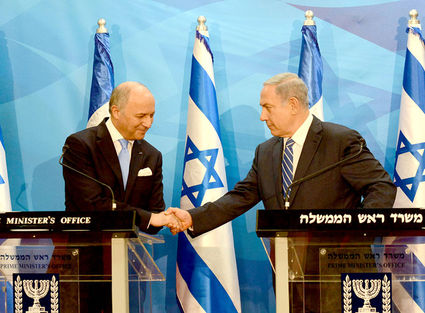 Israel wants no part of it.

The French peace proposal reportedly would have three components: a return to direct Israeli-Palestinian talks, a committee of representatives from world and regional powers to facilitate the negotiations, and a United Nations Security Council resolution that would set a timetable for the process.

"We don't want to replace the role of the sides," Foreign Minister Laurent Fabius of France said, according to Israeli reports, adding that the U.N. resolution is "a means, not an end."

But for Israel, the resolution is a poison pill. The Israeli government sees U.N. actions regarding Israel as irredeemably biased and has opposed Palestinian initiatives to gain statehood through U.N. recognition.

Following a meeting in Jerusalem with Fabius during his official trip to the region on Sunday, Israeli Prime Minister Benjamin Netanyahu called for a return to bilateral talks without preconditions.

"This attempt will not merely fail, it will drive peace away," Netanyahu said. "First, Israel will resist the imposition of terms from the outside. And second, the Palestinians will never agree to negotiate if they think the international community will give them what they want without negotiations."

But after more than two decades in which successive American-led bilateral negotiations have collapsed, foreign diplomats may see the United Nations as an alternate avenue to keep alive the possibility of a two-state solution. A Security Council resolution, in France's view, could push the parties toward talks while enshrining Palestinian statehood as an issue of international consensus.

"They think there is a place to sustain the troubled process with a new resolution that will be a new international reference point for the process," said Shimon Stein, a senior research fellow at Tel Aviv University's Institute for National Security Studies. "There's no doubt [France will] make an international move. They'll talk to the Russians, the Brits, the European Union."

Analysts said the proposal, which has yet to be formulated, is more about internal French politics than solving the Israeli-Palestinian conflict.

Tsilla Hershco, an expert on French-Israeli relations at Bar-Ilan University's Begin-Sadat Center near Tel Aviv, said France feels a responsibility to intervene in the region because of its former colonies in the Middle East and North Africa. France saw an opening for itself, she said, after the U.S. disengaged from Israeli-Palestinian talks following their collapse last April. The possibility that the United States would not veto a resolution means that one could pass.

"It's like their baby," Hershco said of France. "Their job is to play an influencing role in the Middle East. At a certain point they saw Obama was ready to act, but they saw it didn't work, so they began again. They say, 'We won't give up.'"

Khalfa noted that a two-year deadline set by Fabius in December for France to recognize a Palestinian state comes ahead of the 2017 French presidential election. He said that recognizing a state of Palestine could boost President Francois Hollande's popularity among Muslim voters.

Israeli politicians across the political spectrum have also become disillusioned with confidential, bilateral talks. Instead, several have called for a regional peace conference including Sunni Arab states, which could advance Israeli-Palestinian peace in addition to Israeli normalization with the Arab world.

Speaking to his Cabinet on Sunday, Netanyahu rejected the "international diktat" that he said was being forced on Israel.

"There is no reference to the security needs of the State of Israel and our other national interests," he said. "They are simply trying to push us into accepting indefensible borders while completely ignoring what will be on the other side of the border."

Whether or not a resolution passes, Israeli officials said it won't force an Israeli withdrawal from the West Bank.

"Now we see the Palestinian leadership, encouraged by some countries for several years, trying to internationalize the conflict," Deputy Foreign Minister Tzipi Hotovely, a member of Netanyahu's right-wing Likud party, told the French newspaper Le Figaro on Friday. "This is a very dangerous process not only for Israel but also for themselves. After all, the adoption of a resolution by the U.N. does not prevent us from continuing to defend ourselves militarily."