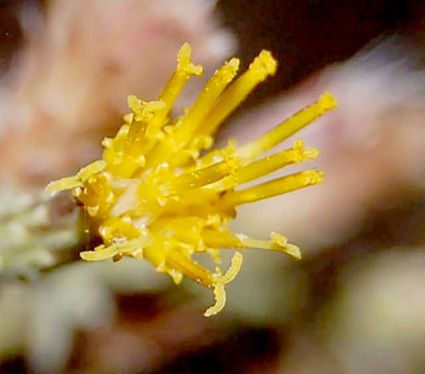 This photo of sharp varthemia was taken in the Mir Forest between Jerusalem and the Judean Desert.

The center's efforts to isolate the plant's active compounds-and to assure these compounds are present when the plant is grown in the greenhouse rather than in the wild-is the topic of Gorelick's presentation at the 25th Judea and Samaria Research Studies Conference at Ariel University.

"This is a plant that only grows in Israel, Jordan and the Sinai, and has been used traditionally by Bedouins for controlling diabetes," Gorelick tells ISRAEL21c. "I've been screening different Israeli plants for diabetes and this is one of the best candidates."

In a study published in the Journal of Ethnopharmacology in October 2011, Gorelick and his team describe how they tested the effects of the plant on a particular Negev rodent with a nutritionally induced model of diabetes. When the animals were given an oral glucose tolerance test, blood-glucose levels returned immediately to normal levels only in the ones that had been fed sharp varthemia before the test.