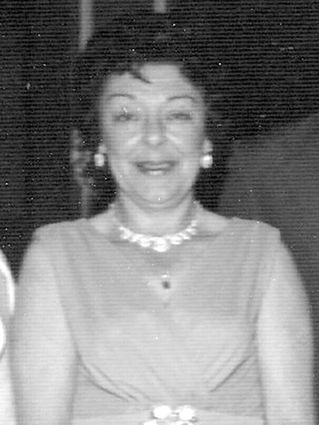 I recently heard from a representative of the Simon Wiesenthal Center with some upsetting news. I truly was taken by surprise. I pass it along to you:

"The Simon Wiesenthal Center today condemned the UCC vote by the General Synod (national decision-making body) of the United Church of Christ to boycott Israeli companies and to divest from companies doing business with Israel."

The United Church of Christ (UCC) is a distinct and diverse community of Christians that come together as one church to join faith and action. With more than 5,100 churches and 1.1 million members across the U.S., the UCC claims to serve God in the co-creation of a just and sustainable world.

Here is the email I received:

"The Simon Wiesenthal Center condemned the vote by the General Synod of the United Church of Christ to boycott Israeli companies and to divest from companies doing business with Israel.

Rabbi Abraham Cooper, associate dean of the Center, said 'Today the UCC has voted to support the anti-peace BDS movement that will not improve a single Palestinian life but only succeeds in encouraging those seeking to demonize and weaken the Jewish state and her supporters around the world.' Rabbi Cooper continued, 'What a travesty and tragedy! Instead of working to forge interfaith alliances to work together on behalf of endangered Christians around the world, instead of seeking new partnerships to forge new opportunities to invest in peace, the Jewish community is faced with another slap in the face. Jews contemplate a resolution that demonizes Israel without any attempt at placing responsibility for the Middle East impasse on the Hamas terrorists who lob rockets into civilian centers in Israel's heartland, dig terror tunnels from which to launch attacks on Israelis, and extol the virtues of exterminating Jews in their media.'

"The Simon Wiesenthal Center urges UCC members to reflect on the words of John Dorhauer, the new general minister and president, who admitted that he will fulfill the vote... 'with a deep awareness at the pain that I will cause to people... wondering if the benefits of the divesting from those companies is equal to cost to the relationships that we have with people who are critical to our movement towards justice, not just in Palestine but in many other places.'

"Rabbi Yitzchok Adlerstein, the Center's director of interfaith affairs, added some historical context. 'The UCC today sunk the Mayflower. It is lamentable that the heirs to the Congregationalists who brought notions of religious freedom, equality, and peace between peoples to the Plymouth Colony would subvert that message and embrace ignorance and terror. Just a few weeks ago the Pew Report on American churches showed Americans walking out of churches like the UCC in droves. We can see why. Why would young people want to stay in a church that makes no pretense toward fairness, and offers no more practical contribution to a complex problem than meaningless slogans that will not improve the chances of peace one iota, and only distance the two sides to the dispute?'"

Everybody has an Aunt Sadie...

And if they don't, they should have... at least one like our Aunt SADIE YOUSHA, the most loving and wonderful woman ever!

I loved to hear Aunt Sadie laugh so I phoned her through the years and told her jokes. (She always laughed at my jokes... even the bad ones.) She was always happy to hear from me and my spouse.

Unfortunately we didn't have as much time as we would have liked to spend with her as she lived in New York and we are Central Floridians for more than half a century.

Sadie left us on June 22nd. She will be sorely missed by her children, GARY and ARLENE, Gary's wife, SHELLY, grandchildren, STACEY and MICHAEL, Stacey's spouse, TODD, adorable great-grandchildren, LEVI and WYATT and by Sadie's entire family.

(Irv and I are truly heartsick. What a great lady our Aunt Sadie was. We will never forget her.)

Definition of a "Mensch..."

I received the following email from NANCY LUDIN, executive director of the Jewish Pavilion:

The urban dictionary defines mensch as someone with notable character. The term epitomizes the volunteer work that JUDY SUBERMAN has done behind the scenes for a decade.

Judy Suberman began volunteering with the Jewish Pavilion about 10 years ago when her beloved mother lived at Atria Senior Living. She and her daughter, Rachel, visited regularly and offered to visit with the other residents while in the building. Together with JERRY LIEBMAN, Suberman leads Shabbat services at Atria.

Many wonderful friendships were forged over the years. While many of her senior friends have passed, some friendships continue to this day. When residents moved, Judy followed them, and now she also visits regularly at Spring Hills Lake Mary.

The urban dictionary goes on to say that mensch is someone to admire and emulate. At the Jewish Pavilion, we have the highest regard for Judy's compassionate nature.

The waiter's name is JOSH DOBBS. And the restaurant is the wonderful Bagel King in Casselberry Commons, owned by TINA MARIE SCHMIT, daughter of FRANK PEROTTA.

Everything at Bagel King is superb (but most of us knew that already) and very large. For instance, I ordered a side item of one slice of French toast. It was large enough for two people. (I took half home... and never saw it again.) Also, I purchased a cookie. Once again, the one cookie could easily satisfy the cravings of four hungry people.

The service by Josh was right on and everything was served with a smile. (He even remembered my name!)

(It's all about food with me.)

One night, Moshe and Susie, both in their eighties, go to Blooms Restaurant. Moshe orders just one plate of salt beef, latkes and new green cucumbers. Then, when it arrives, he digs into his favorite food. Susie just sits there watching him enjoy himself. 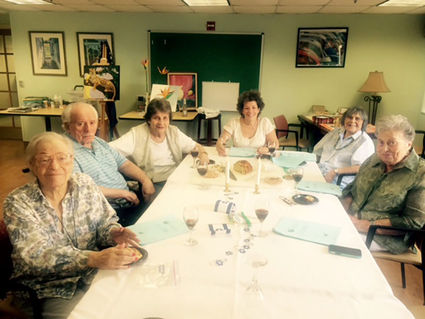 Judy Suberman, seated at the head of the table

Shlomo, sitting at a table nearby, notices that Susie hasn't got a meal. He then gets quite upset when, with plenty of food still left on his plate, Moshe puts down his knife and fork, removes his napkin and puts it on the table.

"How mean," thought Shlomo, "the elderly lady is just sitting there without any food. Maybe they can't afford two meals?"

So Shlomo goes over to Susie and says, "I hope you won't be offended but I see you don't have anything to eat. Could I please treat you to a meal? It would really make me happy if you said yes."

Susie replies, "That's very kind of you but there is no need to worry about me. My husband Moshe and I share everything 50/50 and now that he's eaten his half, it will soon be my turn."

"So what are you waiting for?" asks Shlomo.