Seeking kin-1929 photo launches a family connection across the ocean 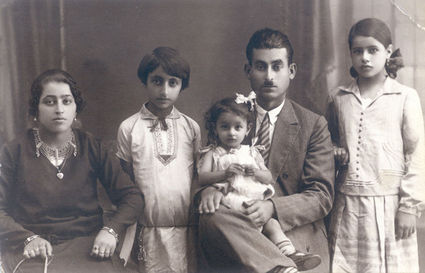 This 1929 photo of the Zacharia family in Tel Aviv launched a search for missing kin from America.

(JTA)-Jewelry hung from Rosa Zacharia's ears and neck. Bracelets adorned her wrists and she wore rings on six of her fingers. She and her family were dressed to the nines.

Life appeared to be pretty good for Zacharia and her husband, Naftali, and their three girls: Sara, Rahel and Yoheved.

This was the image of the Zacharia clan captured at a Tel Aviv photo studio on May 29, 1929. Naftali mailed it to Chicago, to his brother Suleim, who went by Simonto, perhaps a diminutive of Siman Tov.

The information on the pre-statehood Israelis was handwritten on the back of the photograph. It constituted nearly all that Suleim Zacharia's granddaughter, Valerie Chereskin, knew about them. Also known was that Naftali and Rosa had a tea shop in Jerusalem.

Chereskin, who owns an eponymous public-relations firm near San Diego, California, contacted "Seeking Kin" for help in locating the Zacharia daughters and their descendants, hoping to meet them during the visit to Israel she and her husband Jay Hansen were planning.

"Seeking Kin" recently reached Shai Shuhami. Based on the information presented to him, the Jerusalem business owner confirmed that he was Chereskin's second cousin. Shuhami was unaware that he had relatives in America.

His mother, Yoheved-the littlest girl in the photograph-is 86 and lives in Maale Adumim, a West Bank city near Jerusalem. The same photograph adorns her living room wall.

"This is the greatest feeling in the world," Shuhami said. "There's nothing that arouses curiosity more than when searching for one's roots: from where one comes and to where one is heading."

Echoing Shuhamin's enthusiasm, Chereskin said, "This is amazing. I'll be happy all day."

With little to go on, Chereskin wasn't optimistic about finding her kin. Had the search been conducted in reverse-the Israelis looking for their American kin-the odds would've been infinitesimal because, upon reaching America, Suleim Zacharia changed his name to Harry Marks.

That was 101 years ago, when he sailed from the port of Liepaja, Latvia.

Chereskin and her sister, Gail Jelinek, who lives near Chicago, knew of his difficult background in Urmia, in northwest Iran's Kurdistan region.

Naftali and Suleim had three other siblings. A brother, Sarteep, traded their 11-year-old sister Maral to someone for the man's sister, whom Sarteep married.

"My grandfather fought his brother about it," Jelinek said.

Another sister was Gulbahar. Jelinek and Chereskin do not know what became of Sarteep or Gulbahar. In 1914, Sarteep exhibited an eye disease and was turned back from the ship on which he was supposed to sail with Suleim to America.

Maral was said to have died in the desert en route to Israel.

After Suleim's father died, his mother's second husband refused to let Suleim live with them. Suleim worked herding sheep, sleeping among the animals for warmth. He ate grass as they did, sometimes coming to his mother's back door for food. Through the windows of classrooms, he'd glimpse his friends; Suleim did not attend the school because he couldn't pay the tuition.

In Chicago, Suleim worked in a metal factory that during World War II manufactured torpedoes. He died of heart failure at 51, in 1946.

The search was among the most challenging since "Seeking Kin" began four years ago.

In researching the Zacharias, "Seeking Kin" followed several sources, including Israeli cemetery records and conversations with Yosi Mizrahi[], a Jerusalem retiree who is an authority on the now-extinct Mamila neighborhood, where the tea shop stood just outside the Old City's walls and where he said many Urmia natives settled. A friend of "Seeking Kin" checked with the Babylonian Jewry Heritage Center in Ohr Yehuda, near Tel Aviv.

Nissan Aviv, a retired singer-actor who had advertised on the website of Nash Didan-Farsi for "our people"-then suggested posting the request on Nash Didan's website.

Aviv, 87, recalls 4,000 Jews living in his hometown of Urmia, most observant and many working in the textile industry.

"In Urmia, our synagogue had more than 12 Torah scrolls. It was a big, beautiful synagogue," said Aviv, of Tel Aviv.

Ultimately the Zacharias were found by Hezi Yitzhaki, a businessman who lives in the Jerusalem suburb of Motza and whose grandmother was from Urmia. Responding to the "Seeking Kin" post, Yitzhaki combed records of the ministries of the interior and foreign affairs, and of the Jewish Agency for Israel, searching for families whose names and dates matched what Chereskin knew.

Yitzhaki settled upon the correct family, but with great difficulty-and after contacting the Shuhamis, he learned why: Two of the girls shown in the photo were not the children of Naftali and Rosa, who was later known as Shoshana. The eldest girl, Sara, was Shoshana's sister; the girl standing between the two adults, Rahel, was Naftali's daughter from his first marriage.

In a short conversation with "Seeking Kin," Yoheved said that she was the eldest of Naftali and Shoshana's seven children. Four are deceased, including a brother, Ben-Tzion, who was shot to death at 13 in the Old City. One brother, Eli, and one sister, Ruth, are living.

"It would bring together a whole circle of the family connection," Chereskin said of the gathering with the Israelis. "It would bridge that whole gap between the old country and the new country."

Please email Hillel Kuttler at seekingkin@jta.org if you would like "Seeking Kin" to write about your search for long-lost relatives and friends, please include the principal facts and your contact information in a brief email. "Seeking Kin" is sponsored by Bryna Shuchat and Joshua Landes and family in loving memory of their mother and grandmother, Miriam Shuchat, a lifelong uniter of the Jewish people.