How to stomp out BDS in Florida 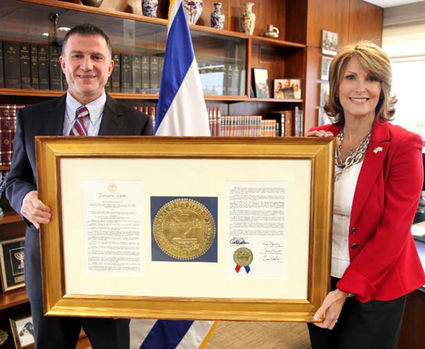 The Zionista are extremely pleased to present Laurie Cardoza-Moore on Wednesday, July 15, at 7 p.m., at the Eastmonte Civic Center in Altamonte Springs. She will speak about the resolution she initiated condemning BDS in the Tennessee state legislature.

Businesswoman, wife, mother of five, she is founder and president of Proclaiming Justice to the Nations, a Christian Zionist group. Recently she initiated a resolution condemning BDS (Boycott Divestment and Sanctions movement) in the Tennessee state legislature. She worked with local Jewish and Christian organizations to bring the resolution to the state legislature. It passed in both houses. Tennessee became the first state to pass an Anti-BDS resolution.

Anti-BDS resolutions are gaining momentum in the U.S. and Canada. The states where resolutions have passed are Illinois, Indiana, South Carolina, New York and Pennsylvania.

Laurie Cardoza-Moore commented: "The Jew-hating BDS movement is about to be hit by a tidal wave of support for Israel and the Jewish People. As proud Christian Zionists who represent millions of believers worldwide, we will stand as a firewall around the Jewish people and will ensure that no form of genocidal anti-Semitism be tolerated. There is a new form of anti-Semitism emerging and not only is it anti-Israel, but it's also anti-Christian and anti-Western civilization."

Cardoza-Moore has produced numerous films. Among them are 48 episodes of PJTN' Focus On Israel program. This 30-minute program explores and teaches the viewer about various aspects and perspectives regarding Israel and the Jewish people. She has secured PJTN as host of the international Religious Broadcasters Convention reaching over 6,000 global Christian Broadcasters and media professional every year.

Currently Cardoza-Moore is working to ensure that PJTN carries its pro-Israel message to more people around the world.

This program with guest speaker Laurie Cardoza-Moore is open to the community at no cost. It will be held at the Eastmonte Civic Center, 830 Magnolia Dr., Altamonte Springs. Donations are greatly appreciated. Reservations are required to reserve a seat. Please contact Sandi Solomon at 407-831-0176 or sansolomon@hotmail.com.

Founded by Eva London Ritt, Diana Scimone, Judy Shujman and Sandi Solomon, the Zionistas are a coalition of Christian and Jewish women united for Israel.  Advocacy, Awareness and Activism is the driving force behind the Zionistas.