Be a part in finding a cure for Parkinson's disease 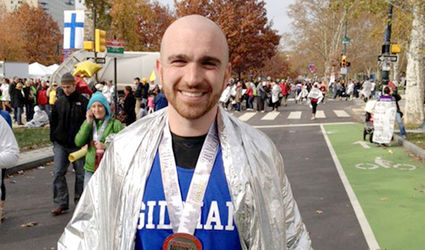 Each year approximately 60,000 people in the U.S. are diagnosed with Parkinson's disease. This degenerative brain disorder is second only to Alzheimer's in prevalence. The actor Michael J. Fox brought national attention to this chronic disease in 1998 after being diagnosed with it in 1991. He has since become an advocate for research toward finding a cure and created the Michael J. Fox Foundation in 2010.

There is no cure yet for Parkinson's and it is not know how people contract it, however there are several studies underway that examine the combination of genetics and environmental factors that can increase the risks. One discovered facet by researchers is that certain genetic mutations may contribute to the onset of Parkinson's disease. These genes are more prevalent in certain ethnic populations, including Ashkenazi Jews.

Joe Gilman, 31, is a descendant of Ashkenazi Jews. He has a healthy, active lifestyle and is interested in keeping his body fit. He chose to be genetically tested because it "just was a natural decision to me to learn more about my body and health." He was very surprised to find that he has a genetic mutation that puts him at increased risk for developing Parkinson's disease, even though there is no family history of the disease.

After the initial shock of learning this-"I thought it was a mistake," he said-he decided to learn as much as he could about Parkinson's. After visiting the Michael J. Fox Foundation website (www.michaeljfox.org) he found that he could use his genetic makeup to participate in research and be part of finding a cure.

With his family's support, he is actively involved in the Parkinson's Progression Markers Initiative (PPMI) clinical trials, even though he does not have Parkinson's at this time, and may never develop it.

"After receiving this unexpected bad news, I realized I had the opportunity to be part of something broader and making a difference outweighs the fears," he told The Heritage.

Dr. Tatiana Foroud, director of Hereditary Diseases and Family Studies in the Department of Medical and Molecular Genetics at Indiana University, explained that in this five-year clinical trial, researchers are focusing on two specific mutation genes: LRRK2 and GBA. Both of these mutated genes are more prevalent in people of Ashkenazi ancestory.

These trials help in discovering the difference between those (who carry these mutant genes) who develop the disease and those who don't. Researchers can also look for what changes just before a person develops the disease. These trials could help speed the development of new therapies benefiting all Parkinson's patients.

It is important to note that, according to Foroud, only a fraction of the people who carry these mutations will develop Parkinson's.

"We start with a pool of people more likely to develop Parkinson's. But the first step is finding people," Foroud stated. It is easy to get genetically tested. Visit http://www.michaeljfox.org/genetics and click on "Get Started" in the "Never been genetically tested?" box. Fill out a form asking a few screening questions and submit it. A genetic counselor will get back with you based on the answers you give. A saliva test kit will be sent to your home, which you send back and a counselor will follow up to explain the results. Only if you carry either genetic mutation, LRRK2 or GBA, will you be encouraged to participate in a trial.

PPMI is seeking individuals who meet either of the following criteria:

• People with Parkinson's who are of Eastern European (Ashkenazi) Jewish, North African Berber, or Basque ancestry.

• Individuals without PD who are related to someone with PD AND who are of Eastern European (Ashkenazi) Jewish, North African Berber, or Basque ancestry.

• If you know you have a LRRK2 or GBA mutation.

PPMI trials are performed all over the country, with two locations in Florida: one in Boca Raton and one in Tampa.