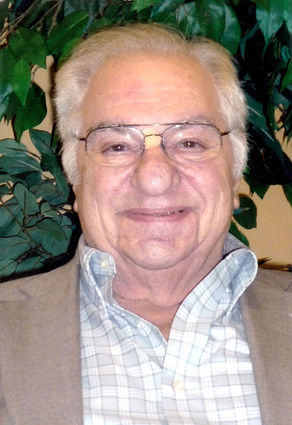 He isn't a professional entertainment agent or a motivational speaker; and he isn't an activities director or fundraiser, but he is very good at all these jobs. He is Berny Raff, and he is this year's recipient of the Heritage Human Service Award because all these "jobs" aren't really jobs to him, they are what he does, and has always done to better this community.

Berny was nominated by Susan Sparrow, Jewish Pavilion office manager. She has known Berny for 10 years and wishes she could clone a younger version of him. "I have never met a more genuine, loving, courageous man in my entire life. He has such a zest for life and such a positive attitude," she said.

Berny's walls are lined with awards he has received over the last 30 or so years. In 2011 the Congregation Ohev Shalom Seniors Club presented him with its first and only Outstanding Leadership Award (he has been the Club's only president). Also in 2011, he was honored with Kinneret's inaugural 8 Over 80 award. But, in truth, he says that awards don't mean that much to him. What does mean something to him? Making people happy. And he does this with such gusto that there is not a soul who isn't smiling after talking to him or attending one of the COS Seniors Group get togethers.

He is most proud of the fact that on Aug. 30, the COS Seniors Group will begin their 25th year-or as he likes to say "we are starting a quarter of a century." This group that began with only 14 members, is now a robust 163 members strong. And the Club isn't just for COS members, the once a month social is open to anyone who is a senior. Berny recalled Levy's Bakery in New Jersey and an advertising sign that always stuck with him. "They had a big advertising sign that had a picture of a black person, Chinese person-all different types-and the sign said 'You don't have to be Jewish to love Levy's Bakery.'" And that's how he feels about the Senior Club-it is not limited to Ohev Shalom members.

Here's a secret though. Did you know that Berny was not the founder of the group? Before that story is told, there were other projects he organized, and all because he watched and saw a need and did something about it.

Back when Rabbi Moshe Elbaz was the principal of COS's Religious School, Berny noticed that the children coming straight from public school to Hebrew school were "starving." He mentioned this to Rabbi Elbaz and asked if something could be done. Rabbi Elbaz said, "Do it." So, Berny and his wife Eleanor z'l took it upon themselves to provide bagels and cream cheese, adding jelly and peanut butter and more snacks as time went on. "That was 28 years ago," he said, and it's still going strong (although he isn't doing it).

On another occasion, also 28 years ago, he happened upon the couple that used to mail out Ohev's monthly bulletin. He noticed that the man kept spilling his coffee on the labels and they'd have to be reprinted. He watched them do this for about three mailings. And coffee kept being spilt. So, he approached them and asked, "Why don't you let me do the bulletin?"

"Look, I don't drink coffee. There is no chance of me ever spilling coffee all over the labels."

The next month, he and Eleanor started mailing the bulletin, and he continued to do the mailing up until a year ago.

That is Berny Raff. When he sees something that needs to be done, he jumps in 100 percent. And his lovely wife Eleanor was always by his side.

"Berny is a mensch," said Dr. Daniel Layish, whose journey with Berny has gone from being his doctor to becoming his friend. "He has a love for life, Judaism and Yiddishkite that is easily seen by anybody who knows him."

Dr. Layish was Berny's physician three years ago when Berny had to be hospitalized after complications from a broken ankle. At the time, Berny was caring for Eleanor, who was suffering from Alzheimer's disease. He suffered a series of illnesses, operations, was dead for six minutes, recovered, lost Eleanor, and had to stay in rehab for several months.

None of this kept him down.

Earlier this year, Berny once again faced the prospect of death. He had to have a serious operation. "It was a hell of a decision to make," he recalled. But with the guidance of Dr. Layish (who was not his doctor this time), and his two sons-one lives in Connecticut and the other in Minneapolis-he underwent the seven-hour surgery.

"Yes, I went through hell," he said. "I know it, I feel it, it never stops. But my attitude is way up there. It amazed me to hear that I died for six minutes."

Staci Enouiti, a friend of his, wrote a profile about Berny titled "Alive and Living Young" for a class she was taking. In it she said "... Berny has overcome so many obstacles and as the cliché goes 'you can't keep a good man down.'"

Berny was born in Jersey City, N.J., on Feb. 14-"My mother who died two weeks before her 90th birthday used to tell me that the sweetest thing that happened to her was I were born on Valentine's Day. I must have heard it a billion times," Berny said laughing. He moved here by himself 43 years ago to retire from his career in management at The Art Instruction School, where he placed young people into trade schools. After being here six weeks, he called a friend and asked "How about a territory in Florida for me?" He was given the entire Southeastern region. Berny is not one to retire.

After living here about 13 years, a friend gave him Eleanor Gordon's phone number. It concerned Berny that she was only a widow 5 weeks. After dinner and dancing on their first date, he wanted to see her again, but asked "Are you ready to go out?" Because of the many heart attacks her husband had suffered, she by his side through it all, she replied, "Berny, I've been a widow like this for seven years."

"So obviously, I came along and she grabbed the opportunity!" he said jokingly, then lovingly continued, "She did everything with me."

Back to founding the COS Seniors Group. Berny does not take the credit for creating the Seniors Group. "There were two other guys who started the Seniors," he said. One is now deceased, the other lives in Clermont. "Let's start a seniors group," they said to him. Berny thought it was a good idea, but the timing wasn't good for him. Eleanor was in the hospital for a lung operation (it went well) and then he and she had a wedding to go to in New Jersey. When he returned his phone was full of messages.

"What's going on with all these messages?" he asked a caller.

"Mazel tov! You became the president of the Seniors Group!"

Since then Berny has made sure the first Sunday of every month seniors would be entertained by paid professional entertainers, enjoy refreshments and socialize with all their friends. "Children and seniors are my life," he said with joy.

He never brought in talent that he had not heard. He and Eleanor would hear of singers and go to wherever they were performing to hear them before hiring them to perform at the COS Seniors Club. He now has an index-card file full of professional entertainers.

Three years ago, when he had major surgery and was in rehab recuperating, he called his friend Susan Sparrow (who was at the time COS's clergy assistant) and asked her to bring him that index-card box. From his bed in rehab, he called an entertainer he'd wanted to hear and explained to her that he doesn't hire anyone without first hearing them. About two days later he had a visitor. It was this entertainer. She came to sing for him. Not only did she sing for him, many people in the rehab unit came into Berny's room to listen. Of course he hired her. Who was she? Ginger Minj, the award-winning drag entertainer. As with most people, Berny and Ginger became best of friends.

Another famous entertainer Berny heard and hired for the COS Seniors Club was jazz singer Jacqueline Jones, who has also become close friends with Berny. She performs all over the world, and one year when Jones was in Japan, she called Berny and Eleanor at Rosh Hashanah just to wish them happy new year.

Last year, Berny asked Jones if she would sing at Rabbi Aaron Rubinger's wedding, but he told her he couldn't pay very much. "Because it's you," she told him, "pay my guys (two musicians) $50 each and I'll be there for you."

Rubinger has been Berny's rabbi and friend for many years. "Berny Raff is truly one in a million. His dedication to seniors, to fellow congregants and to the community is legendary," he told Enouiti in the profile she wrote about Berny.

In addition to the Seniors Club entertainment, Berny is now involved with entertainment at Brookdale, where he lives in assisted living. He brought in Jacqueline Jones to the first social he helped with, and more than 162 people turned out to hear her sing. Brookdale staff were impressed as they would usually only get about 10 to 15 people to attend the socials.

"When ya got it, ya flaunt it!" Berny said with a smile.

Where does Berny get his funding for the COS Seniors Club? Dues are $10 a year, events cost $5 per member and $8 for guests. That's hardly enough to cover refreshments. So every June he sends out a fundraising letter to everyone he knows and asks for money. And the money comes in. Last year he raised $5600. He also receives a check from Costco and a gift cards from Publix.

"Here's a story for you," he tells Heritage. "In New Jersey my rabbi, Rabbi Mazur, came to me with a problem. 'We never get a minyan for Selichot before Rosh Hashanah.' I tell him, 'Rabbi, I have a solution.' 'What are you going to do?' he asked. 'Don't worry about a thing-you have a problem, I have the solution!'"

Berny took out an ad stating "Come join us for a New Year's Eve dinner dance. Reservations required." He never once mentioned selichot. About 190 people came to the event. At 11 p.m., when the music stopped and the cantor came out to lead the selichot prayers, not one person left.

"That's what I do," Berny said with a smile. And he does it very well.

Oh, there is one award that really means something to him. Congregation Ohev Shalom dedicated a parking space to Berny. "That brought tears to my eyes! My name on it-'Reserved for Berny Raff.'"

The first Sunday of every month, Berny can be found at the COS social hall. "Come on down and spend the afternoon," he says. "I'm at the front door with the ladies. Come on down and be my guest. Bring a friend!-That's the way we built the organization."

Jeff Gaeser, publisher of The Heritage, will present the award to Berny at the Jewish Federation of Greater Orlando Annual Meeting held on Wednesday, Aug. 19 at 6 p.m. at The Roth Family JCC in Maitland. All are welcome to come and celebrate this occasion with Berny Raff.