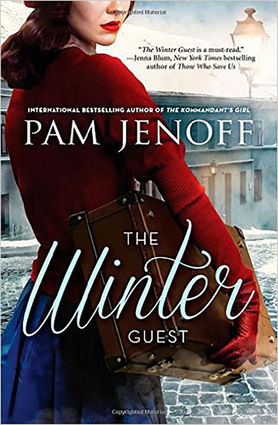 A story of jealousy, betrayal and suspense

"The Winter Guest" by Pam Jenoff

Life is a constant struggle for the impoverished eighteen-year-old Nowak twins as they raise their three young siblings under the shadow of the Nazi occupation. The constant threat of arrest for even the most minor infraction has made everyone in their village a spy, and turned neighbor against neighbor. They are faithful allies in protecting their family from the threats and hardships the war brings closer to their doorstep with each passing day.

Everything changes once Helena discovers an Allied paratrooper stranded outside their small mountain village, wounded, but alive. Risking the safety of herself and her family, she hides Sam-a Jew-but Helena's concern for the American grows into something much deeper and the dream of a life beyond the mountains beckons. Defying the perils that render a future together all but impossible, Sam and Helena make plans for the family to flee. But Helena is forced to contend with the jealousy her choices have sparked in Ruth, culminating in a singular act of betrayal that endangers them all-and setting in motion a chain of events that will reverberate across continents and decades.

"The Winter Guest" is based on real-life events that Jenoff discovered while working as special assistant to the Secretary of the Army at the Pentagon and then as a diplomat for the State Department in Krakow, Poland. While working there, working at the Pentagon, she accompanied a delegation of senior U.S. officials to 50th anniversary commemorations of the Second World War in Europe and Asia.  One trip was to a tiny cabin in the mountainous woods near Banksa Bystrica, Slovakia, where several American intelligence officers had been captured and later executed during an attempt to aid the Slovak uprising against the Nazis. The Americans had been aided in their mission by a young Slovak woman. Jenoff was inspired by their bravery and "The Winter Guest" was born.