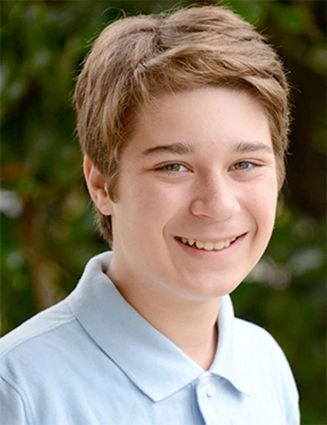 Joshua Gray Lefkowitz, son of Aaron Lefkowitz of Winter Park and Elizabeth Lefkowitz of Casselberry, will be called to the Torah as a bar mitzvah on Saturday, Aug. 1, 2015 at Congregation Beth Am in Longwood.

Joshua is entering the eighth grade at Lake Forrest Academy. He loves music, particularly Broadway music, and has performed in his school's musicals. He has also worked as a professional actor in plays at the Shakespeare Theatre, the Fringe Festival, and in local commercials, all while maintaining an A average in school. In his spare time, he has volunteered at Clarcona Elementary School packing food for hungry children and has helped prepare and serve food at the Ronald McDonald House for families with sick children.

Sharing in the family's simcha will be Joshua's grandparents, Ivan and Fern Lefkowitz of Orlando, and Jerry and Kathy Yakubchik of Longwood; his stepmother, Amanda Lefkowitz, his stepsister, Mymore; and his stepbrother, Steven.