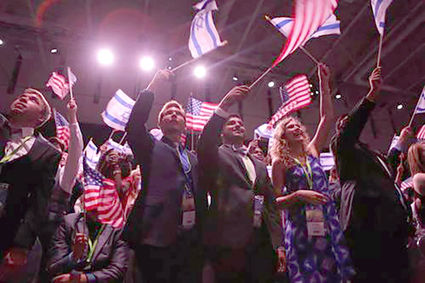 While the ink dries on the newly signed nuclear deal between Iran and world powers, America's largest pro-Israel organization is seeking to help defeat the agreement in Congress through the work of its nascent office in Washington, DC.

San Antonio-based Christians United for Israel (CUFI), which during 10 years of existence has grown to 2.2 million members, is beginning to hire staff for a new entity dubbed the "CUFI Action Fund." Headed by Gary Bauer-the U.S. under secretary of education in the administration of former President Ronald Reagan-the Action Fund is a 501(c)(4) organization, the Internal Revenue Service (IRS) designation for tax-exempt groups dedicated to social welfare, meaning that it will have more leeway on political activities than the 501(c)(3)-status CUFI. The influential American Israel Public Affairs Committee (AIPAC) lobby, too, is a 501(c)(4) group.

Bauer told a small group of reporters at CUFI's annual Washington Summit this week that because the Iran nuclear deal has failed to meet the Obama administration's own stated standards, "we're going to go all out, as challenging as it will be, to get the 67 votes that we will need in the United States Senate" to nix the deal. (Sixty-seven Senate votes against the agreement will enable Congressional rejection of the deal to override a presidential veto.)

Once it is fully operational, the CUFI Action Fund will deliver daily reports to every Congressional office on issues related to the U.S.-Israel alliance, according to Bauer.

"Even though it's Christians United for Israel, really at the end of the day it is about the United States, too. ... Israel and the United States are the two pillars of Western civilization, and that civilization is under attack," said Bauer, who explained that after "10 really successful years educating people" and hosting the yearly Washington convention, CUFI founder Pastor John Hagee "decided that it was time to set up a serious professional Washington operation."

Asked by JNS.org if the Action Fund will focus exclusively on CUFI's Christian Zionist core, or if its activity will also target the Jewish community, Bauer noted that "there are more and more Jewish attendees at our [Washington] conference, and certainly we have financial supporters in the Jewish community... our intention is to have people of goodwill of all faiths, as long as they agree with us on the major issues. Christians, Jews, Buddhists, you can even be an atheist and belong to Christians United for Israel, as long as you're pro-Israel."

"Much like I would say AIPAC is a primarily Jewish organization, but anyone is welcome and they have Christians there, this is clearly a Christian organization [in which non-Christians are welcome], and I think what's going to make this [Washington office] a success from day one is the fact that we've built up this base of support," Brog said. "This is a (c)(4) that has this powerful grassroots network behind it, with members in every Congressional district. It's going to give it a lot of immediate influence and relevance."

That influence will be put to the test right away by the legislative issue of the nuclear deal.

"This is a pitiful chapter in Western diplomacy that I think will rank right up with poor Mr. [Neville] Chamberlain stopping at the top of the stairs at that plane and waiving a sheet of paper and thinking that somehow ink on paper would stop the ravenous appetite of a madman like Hitler," Bauer said. "We're facing the same kind of hatred, the same kind of ideology that is not only anti-Israel, it's anti-Semitic, and the idea that the mullahs of Iran would sign anything that the West could rely on is I think outlandish."

Bauer, himself a candidate in the 2000 U.S. presidential race, said that whoever wins the 2016 election is "going to have a job that will be almost unimaginable if this treaty goes forward, because how do you put a nuclear Iran back in the bottle?"

While CUFI was previously "limited in what we could do in overt politics," said Bauer, the 501(c)(4) Action Fund will allow the organization "to be more assertive" about promoting Israel as a priority issue in federal or state elections.

CUFI said it invited every declared presidential candidate from both major parties for the interviews, but no Democrats accepted. In his comments to interviewer Bret Stephens, deputy editorial page editor for the Wall Street Journal, Graham touched a nerve by joking about CUFI's bipartisanship.

"AIPAC is one of the strongest foundational groups in America regarding the U.S.-Israel relationship. AIPAC is bipartisan. Not so much for y'all," Graham told the summit crowd.

Brog told reporters that he disagrees with Graham's assessment. "We have Democratic members of CUFI, and people shouldn't buy into the stereotype" of CUFI not being bipartisan, he said, pointing out the "extensive diversity outreach" the organization has had in place for eight years.

Bauer said that in the early years of CUFI, he was always surprised "to see how many doors did open on Capitol Hill, even in the Democratic Party, when the issue was Israel."

"I have arguments with Democrats about other things, but on this issue-even though I think the president is unfortunately transforming the Democratic Party to some extent-there are still Democrats that care about Israel, and I think we'll be able to work with them," he said. "The folks we can't bring light to, we'll try to bring heat to."